There are many secret and hidden chambers under the Gret Sphinx of Egypt and some say that the hall of records are there and some say there is a secret city beneath the Sphinx of Egypt? But one thing we know is thathere's plenty of secret, hidden tunnels and entrances under it! That we know as we have documented proof of this. If you take in to account all the secrets of the Sphinx it leads to one fascinating conclusion - there's something definitely going on beneath the Sphinx and the archaeologists involved plus the US government and the Egyptian governments all know about this and are keeping it a well hidden secret! 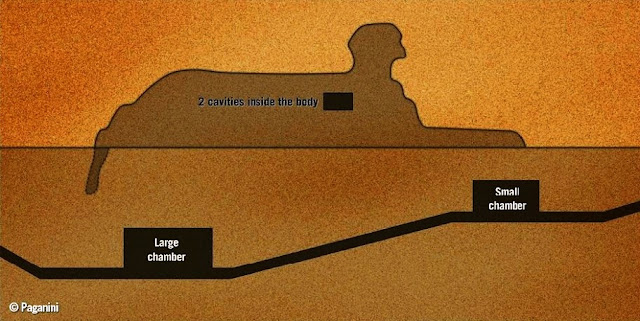 It is blooming spectacular and very confusing at the same time with conflicting information regarding the secrets and myths of the Sphinx?


The Sphinx of Egypt has a hidden chamber which holds the Hall Of Records apparently, but it also has other secret hidden chambers of which hold possibly anything you could imagine? The chambers are there it's been proven by Japanese scientists.

So why is there an entrance on the side of the Sphinx? Is it to a secret underground city beneath the whole region? Basically every single secret, hidden and forgotten entrance has that very same tag applied to it, i.e - where does this one lead to?

Are they all exclusively different or are they all connected to one chamber? Personally I believe that there's many, many secret and hidden places under the Great Sphinx and my explanation for that is the many myths, legends that go with the Sphinx? That tell's me that they could ALL possibly be right? They could all have validity in their individual legends and myths.

Check out this link for more...
The 'Door' In The Great Pyramid.

The Hall of Records is an ancient library claimed by Edgar Cayce to have been deposited at the time of Imhotep at Saqqara in Egypt. It has been suggested (by who) that the Hall of Records is under the Great Sphinx of Giza, which is in the Giza pyramid complex. There is no evidence to indicate that the Hall of Records ever existed. In 1998, Zahi Hawass, Chief Director of the Supreme Council of Antiquities, undertook excavations beneath the main body of the Sphinx at Giza and rediscovered access tunnels to several large, apparently natural, caves directly under the Sphinx. No artifacts were found and a survey was undertaken to assess any potential threats in the substrate that might affect the ancient monument above.

"There Was Evidence Of Earlier Ancient Excavations."

Hawass commented in a documentary about the 1998 excavations that he suspected that there could be other cavities beneath the structure, based on the evidence of the small watercourse that had caused some minor structural damage to stonework on the flank of the Sphinx.

I thought that they (archaeologists) were all one massive family all working for the common good which is all about finding that new world breaking discovery(s) and also about rediscovering forgotten parts of history and so as to secure, preserve and introduce any new find(s) to the general public? 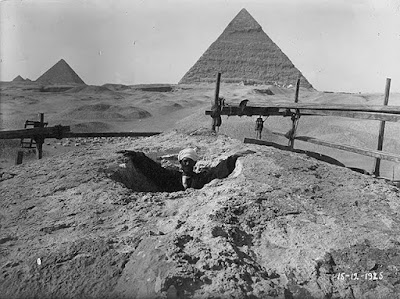 This is a rare image of the Sphinx shows the surface of the head of the Sphinx. The images was taken in 1925. Image Credit Unknown.

Hidden Chambers beneath the Sphinx:
Rare images show how to access the Sphinx. This is an incredible image (just above) and shows how much the Sphinx was buried literally right up to if not past it's head at one time? The guy in the image is shown literally entering the head of the Sphinx which is amazing and the entrance still exists to this day. Hardly any of the public of the world so-to-speak know about this, but now you do? Your a privileged bunch aren't you, lol.

In 1987 a Japanese team from Waseda University (Tokyo), under the direction of Sakuji Yoshimura carried out an electromagnetic sounding survey of the Khufu Pyramid and Sphinx and found SEVERAL cavities and tunnels. Rare images of the Great Sphinx suggests there are several intricate entrances. The Great Sphinx of Giza has captured the imagination and interest of anyone who has seen it. This fascinating monument which proudly guards the Pyramids at Giza is without a doubt one of the most mysterious ancient structures on the planet.

THE RESULTS ARE IN!

The results were fascinating:

A. South of the Sphinx. The Japanese indicated the existence of a hollow 2.5 m. to 3 m. underground. And, they found indications of a groove on the Sphinx body that extends beneath the Sphinx.

B. North of the Sphinx. The Japanese found another groove similar to the southern one which may indicate that maybe there is a tunnel underneath the Sphinx connecting the south and north grooves.

C. In front of the two paws of the Sphinx. The Japanese found another hollow space about 1 m. to 2 m. below surface. Again, they believe that it might extend underneath the Sphinx.

With a length of 241 feet and a height of 66 feet, the Great Sphinx of Giza holds the record as the largest monolith statue on the surface of the planet. But its beauty and mystery go far beyond its size. If we take a look at the Sphinx today and compare it to extremely old and rare images of the monument when it was still covered in sand, we will notice numerous interesting details which point to the possibility of an underground world existing beneath it.

Why, because why have so many entrances if it just leads to one chamber? It doesn't make any sense at all to have that many entrances but only going to the one stupid chamber. It indicates a large volume of people coming and going, like a city? That's an impressive deduction, lol. In fact it's the easiest deduction to make in the world and hence the legend of the mysterious hidden chambers beneath the Sphinx was probably born from that, maybe? Maybe not but the city beneath the Sphinx is a lot better opinion and fits even easier than it just been a chamber don't you think so? Check out all the blooming entrances to the Great Sphinx of Egypt in the images below...

Now if these don't get you interested than I don't know what will? 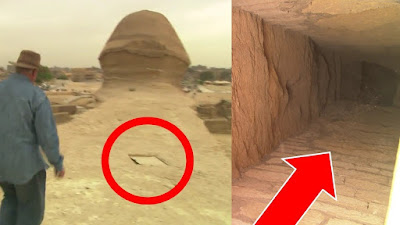 This ancient monument which some authors argue is far older than the ancient Egyptian civilization was discovered (almost completely covered in sand) in AD 1817, when the first modern archaeological dig, led by Giovanni Battista Caviglia managed to uncover the Sphinx’s chest completely. 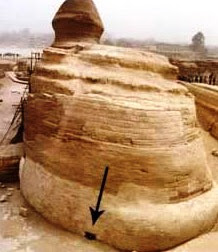 After a couple of decades, the entire Sphinx was finally excavated in 1925 to 1936 by an archaeological expedition led by Émile Baraize. It is precisely during that period when the most interesting images of the Great Sphinx were taken. These images depict numerous cavities, entrances and what appear to be tunnels that according to many leads below this majestic ancient monument. 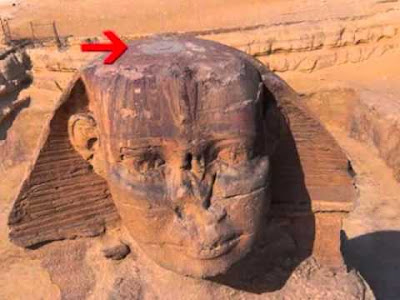 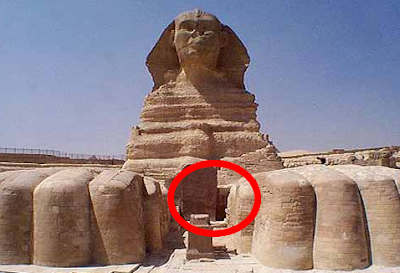 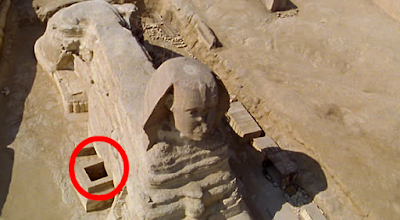 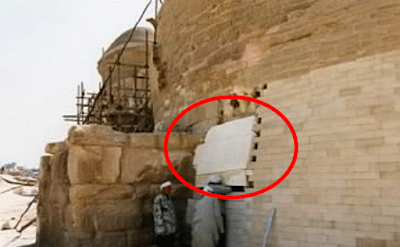 Number 8 is by far the most impressive and by far the most interesting opening, entrance if you like and has a real pull on all the people who see it. The possibilities are probably the most inticing that one could ever imagine? Image the possible technology, lost inventions, lost writings, lost beliefs, teachings and religions, statues, monuments or even Alien space ships and even Alien knowledge?
The mind boggles, is this why it is being jelously guarded!

It just keep's on giving! There's to my count nine (9) entrances and yeah I've even surprised myself? I never knew there was that many entrances at all. All I did was search the internet from top to bottom? I literally spent what 3 hours on just the image part of this post. So yeah this post actually has taken me a while, days to do. But that's why I love researching "or" scratching the surface as I like to call it - because everything has a follow up question doesn't it which starts the chase off all over again?

It usually starts with a "why"?
That's sometimes how I research, if I start to stall I simply ask myself a 3rd person type question. It's a good way of overcoming writers block not that I consider myself as a writer? I consider myself a puzzler. Joining the dot's of the past from one question and answer to the next. I wasn't ready for the amount of images and showing that many entrances beneath the Greatest Monument in history or even antiquity though. I'm actually really liking the hidden, secret city beneath the Sphinx mystery the most...

We shall see, only time will tell all?