This is a crashed UFO in Antarctica been guarded by tanks. When does a UFO crash and the US military send out a bunch of Tanks to guard it "in the middle of nowhere"? I'll tell you when, it's when there's ALIENS on-board. If there's nobody for maybe 300 miles and more in every direction why guard a UFO? I'll tell you why, because your guarding the inhabitants of the UFO. There's Aliens on board this UFO there has to be. It's got the best and most robust security system in the world. 4 tanks are guarding it.

Don't write off the Antarctica anomalies just yet, I'm sliding this one through the letter box so grab it on your side don;'t let it drop? The tank's have long gone and the UFO is already back engineered. You know that autonomous self driving hoover in your luxurious apartment? 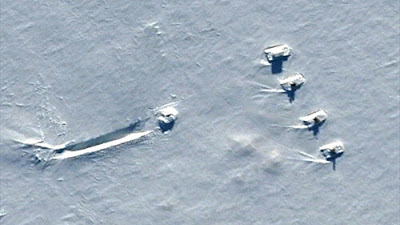 The tanks guarding this UFO cannot shoot the UFO even if they wanted to because they're to close and the gun can't come down that far? Therefore these tanks guns are there in case the UFO takes off.

Look up the coordinates on Google Earth you'll see the crash but the UFO, tank's etc has gone for the most obvious reasons. (I think there's a depression in the ground but that's about it?)

Coordinates are as follows:

This is the most significant and historic find (maybe) because of this exceptional find many people are getting in to the Ufology genre which is a great thing the more the merrier? I maybe typing words with big meanings but that's because this is more than the smoking gun, or the answer that we (conspiracy theorists) all needed of which we all believed would come?

Remember to take peoples ANSWERS to this, with a pinch of salt especially when they say these are pounded targets for tanks to aim for or parachuted in munitions?

Some even said I believe the words are Jimmy Hoffas body? 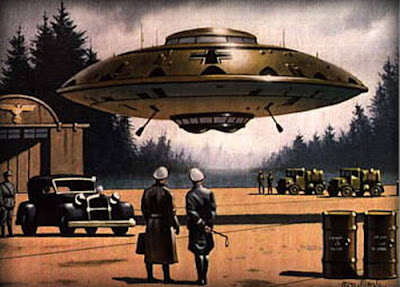 Obviously only time will tell, but time also gives people the opportunity to totally misinform people of the facts and yes the people who debunk ANY conspiracy (because that's their jobs) come out and type all sorts of stuff like official findings is that it's a farmers field with a trench dug by the farmer or something else and people INSTANTLY BELIEVE THAT all the while the truth slips away... 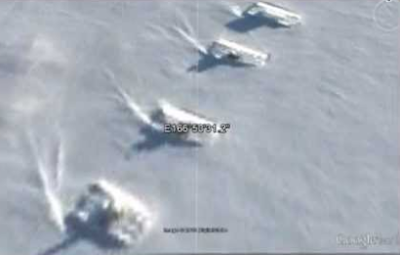 So always go with your gut feelings and always take people "official findings" with a pinch of salt? Just like Trump, he says many things in his statements but then when one checks them, well he kinda forgets that what he said never actually happened? Misinformation is a Government asset.

They pay people to type stuff on social sites to throw people off trails and to lead people to other stories and away from the truth and it's all plausible stuff? In other words it can't be proved one way or another? You see, the thing with common sense is that it grounds one and tells me to be cautious but still investigate further?

Always say and ask the questions on ones mind? One of the questions is this: What happened to this "UFO"? What was the Tanks doing there? Who initially found this and how? You see it was Valentin Degterev who saw this on Google Earth first and it was he who broke it to the world so i'm asking this: Who was the first person to raise the alarm and alert the authorities?


Because one minute the tanks were not there but then the next minuet the tanks were there, then Valentin Degterev saw it on Google Earth. Was it military or civilian? What's happened to it since? What countries military was in the Tanks? Who else knows about this (Government wise?) Where is the tracks from the Tanks?