The Actual Baghdad Battery In The National Museum Of Iraq

The Baghdad battery was a medical device. That's my findings and if you wanna know why I think that then read this post? 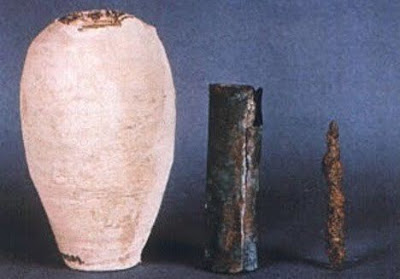 So why am I weighing in on the Baghdad battery? Because I've only just got round to it, there's way to many conspiracies! Plus I can only type with two fingers, lol. The Baghdad battery I first heard about when I was about 22yrs of age? I instantly knew it was real because of the way the scientists and archaeologists were acting with it, you know like it was a gold bar? But still, I'ts one impressive invention and predates Tesla by a golden mile.

So what does history say about this "human caveman invention".

A 2200 year old vessel may have been able to keep a charge. But like many professionals, civilians and Peruvians have asked before me "why"? What was this obvious battery or "energy storing device" used for? Was it used on a daily basis or was it used every now and again? My next question is this:

Was this a medical device?

Did the "patient" hold copper wires and have a shock put through them to cure anxiety? That's what I'm going with because there was no light bulbs back then unless you exclude the aubergine that Erich Von Däniken literally had built at his theme park? I'm not sold on the idea that they (the ancient Egyptians) could blow a glass bulb, design and build a filament which didn't just burn up - Edison thought he'd never crack it? But anyways one never knows? I'm sticking with my own theory as it makes sense to me that the Baghdad battery was a medical device. 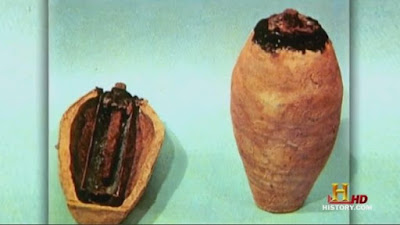 In 1938 a number of small jars were found in the collection of the National Museum of Iraq. These jars, previously overlooked, were found to be quite unique. Each contained copper and iron, and was sealed with asphalt. It was hypothesized based on the various components, that they were a type of battery, possibly used to electroplate metals.

Since they were noticed long after they had been taken from outside of their archaeological context, not much else is known about them. Mythbusters, the television show, recreated them and found that they were able to hold a charge and electroplate quite effectively. However, just because something could have been done, doesn’t mean it was done. 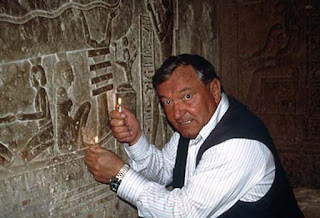 The jars also very closely resemble jars designed to hold sacred scrolls. We may never know their true nature, but no doubt people will continue to speculate on the purpose of the Baghdad battery for a long time to come.


Some of the original 12 Baghdad Batteries can be seen at the National Museum of Iraq, which is currently closed due to the 2003 looting which saw nearly half it’s collection stolen.
Link to our source of information.