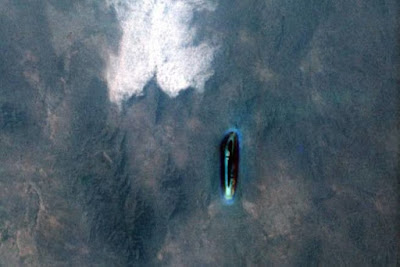 It's never, ever gonna get any better than this UFO right here in this image, just above this writing. Unless you have an actual UFO experience - where you have a meet and greet, have tea cakes and swap business cards. Unless that happens then this UFO is astronaut verified, it's NASA stamped and even though NASA has lost most credibility when it comes to UFOs and Aliens. It took the US Government to tell the world that UFOs exist instead of the institution (NASA) that was set up to handle that type of stuff.

The image is fascinating, almost always overlooked and hardly ever mentioned in TV shows or at meetings, podcasts and specific documentaries. I think it's all by design because nowadays there's that many incidents to choose from that putting this to the side must mean that there's a better one to talk about? Which is very hard to believe...
It's got the one thing every Ufologist look's for though! I'm talking about it's sharp looks, the right angles, the left angles, the colors, discernible and distinctive shapes and also it is moving in the direction that it's propelling itself. There's no blurred edges or suspicious looking strings holding it up which adds up to this being one of the best UFO incidents that has happened in space.
We can deny it and find something, anything, anything at all to dismiss this. People forget how easy it is to dismiss even real UFO sightings.
There's a simple example of what I'm saying:
Take anything that is a fact and cast doubt on it... For instance. The Moon landing itself is hotly debated.
Another instance is that the Apollo mission's stopped at number 17. Only the Apollo 13 crew never made it to the Moon and land a man on the Lunar surface.
The last flight, Apollo 17, occurred in December 1972.
But, did you know that the Apollo Moon missions were paid for, planned, crews picked and allegedly went ahead in secret because the other crews found Alien technology and the last few missions were recovery missions of the technology and Alien bodies.

Anyway, (back to the post) the light blue thruster at the rear of the craft is exactly as one would expect. The shadows, the light and the two tone color scheme all lends to it's rather awesome appearance and believability.

It's a clear and present "spectacular" threat because it's not ours.

James McDivitt and Ed White are astronauts who left a mark by circling the Earth 66 times during the famous Gemini IV mission. During this mission, they’ve also captured an obscure cylindrical object which is famous as one of the best UFO images in the history of space travel and Ufology.

Brigadier General James McDivitt was the commander of the mission while Ed White was the pilot. In June 1965, they both participated in the first multi-day space flight by the US. 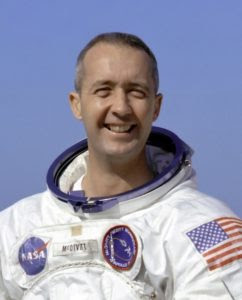 The mission was intended to discover whether it’s possible for humans to stay in space for longer periods. They unwittingly made history with this image that once and for all proved Aliens and their UFOs exist. McDivitt and White rounded the Earth 66 times in a period of four days.

In particular, White hovered outside the spacecraft for around 20 minutes. This performance counts as the first spacewalk ever done by an American astronaut. 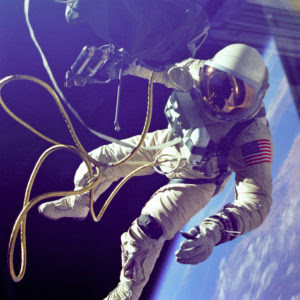 Astronaut Ed White – the first American space walker but that many human firsts where being created that literally it has been swept under the carpet.
Never before has mankind had such a glut of world firsts (loosely termed) and never before in the history of our evolution and human endeavour has so much happened in such a short space of time.
Will we ever be able to leap so far in such a short distance, again? To go from from a planetary based species to an interplanetary species happens but once in the history of reality, mankind and time.

Besides the aforementioned, the Gemini IV mission also represents one of the very first space pursuits of NASA which involved a series of scientific space experiments. But most likely, this mission will remain remembered for something else. Namely, during the mission, astronaut McDivitt managed to capture a peculiar image where an unknown object is visible in orbit.
The internet is full of many UFO claims.

Only one simple search will bring out many stories, videos and photos about possible extraterrestrial visits on Earth. But even then, there is an abundance of material evidence, nobody still hasn’t managed to completely disprove ‘the UFO’ because it is real. However, the UFO sightings of the astronauts are likely the most believable ones because we know that these astronauts wouldn't live a lie. They would not choose to continue a lie right. This story is one of intrigue and the importance that has been placed upon it does not do it any justice. 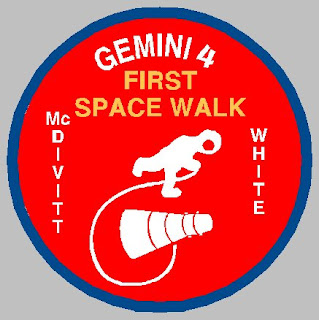 UFO pursuers consider the Gemini IV mission’s UFO sighting as one of the best images on the subject. It shows a weird object in low orbit around Earth. This image, according to an article by UFO Evidence, was even able to confuse the super-skeptical Condon Committee in 1969.

This image was dubbed as one of the best UFO photos ever made. But even so, McDivitt still didn’t make a big deal out of it. Instead, he considered the object to probably be a man-made portion of orbital debris. NASA was full of doubts regarding this image. As a matter of fact, they suggested that there is nothing strange or extraterrestrial on the image. According to other rationalists, the object was actually McDivitt’s booster rocket.

“I was flying with Ed White. He was sleeping at the time, so I don’t have anybody to verify my story. We were drifting in space with the control engines shut down, and all the instrumentation off (when) suddenly (an object) appeared in the window. It had a very definite shape a cylindrical object it was white it had a long arm that stuck out on the side. I don’t know whether it was a very small object up close or a very large object a long ways away.”


“There was nothing to judge by. I don’t know how big it was. We had two cameras that were just floating in the spacecraft at the time, so I grabbed one and took a picture of (the object) and grabbed the other and took a picture. Then I turned on the rocket control systems because I was afraid we might hit it. At the time we were drifting without checking I have no idea which way we were going but as we drifted up a little farther the sun shone on the window of the spacecraft.”


“The windshield was dirty just like in an automobile, you can’t see through it. So I had the rocket control engines going again and moved the spacecraft so that the window was in darkness again the object was gone.”

“I called down later and told them what had happened, and they went back and checked their records of other space debris that was flying around, but we were never able to identify what it could have been. The film was sent back to NASA and reviewed by some NASA film technicians. One of them selected what he thought was what we talked about, at least before I had a chance to review it. It was not the picture it was a picture of a sun reflection on the window.” McDivitt’s description of his UFO on the Dick Cavett Show in November 1973.