Did The US Navy Chase An Alien Aircraft?

Did the US Navy really chase a UFO or Alien aircraft? There been speculation on this one for quite some time now? Even though this is a recognised UFO chase by Navy jets, it is still always going to bring out the imagination in us because it's still not been answered yet. Is this a real UFO.
Did the US Navy really chase a UFO? The video was filmed in 2004 and was investigated as part of the Advanced Aerospace Threat Identification Program (AATIP). It's not clear if the object was ever identified. The New York Times reports that the US Department of Defence programme was shut down in 2012. Was it, was it actually shut down though or just like some other so-called closed programs has this one been kept live, or awake or whatever it's secret code name is? Let's not forget this footage is old now. 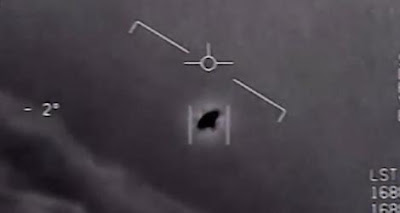 
Link to the video.

It’s finally happening! After years of dreaming and hoping, it turns out we may not be alone in the universe! We have alien friends, maybe and that's only possibly? But if you look at the video and remember where this video come from, well then it starts to look like it could be true that Aliens are real. Footage from Navy planes show them reacting in shock to a mysterious, unidentified flying object off the coast of San Diego which I repeat they cannot identify!

They have no idea what it is. Take a look at it above! Above the entry, above the sky, whatever kind of above you want! Commander Fravor told the New York Times the object was 40 feet in length, had no wings or rotors, and easily out sped their F-18 jet. What is it? Oh, what could it be? “No one knows what they are to this day,” a government employee told MSNBC.

“Research went into trying to identify their strange means of propulsion, their phenomenal aerodynamics which represent nothing on the face of this earth by any country.” Damn!That's probably a red herring as they will already have something even faster than this. It turns out this is also part of a government program (who would of thought that) between 2007 and 2012 to investigate UFO’s and they spent twenty-two million dollars on this so-called "non existence"Alien threat, which doesn't make sense at all. So what do you really, really think about this? I would love to hear your thoughts on this one. Did we find life on other planets?