Alien beings working at Kirkland Air Force Base is a story that people want to believe in because it's got a carefully worded content that makes the person who believes in Aliens want to believe it. I see this common theme throughout the Ufology community but in only certain statements. I'm not pointing the finger at any specific Ufologist but if you know, then you know it's a deliberate attempt at one of a few things? There's definitely Aliens, I fully believe that. I'm definitely not going to blindly believe in anything or any old anything just because it sounds like it could be real? Even if the president of the US said something that is hard to believe well, if it's hard to believe i'll be objective./ Some celebrity Ufologists have a certain amount of power over Alien believers and the nefarious agencies recognise this and are in my own personal view or opinion whatever you call it, are exploiting that. That's the top and bottom of it. Believe in what you want to believe in not what they want you to believe especially if it can't be true because they've been told by a whistleblower. 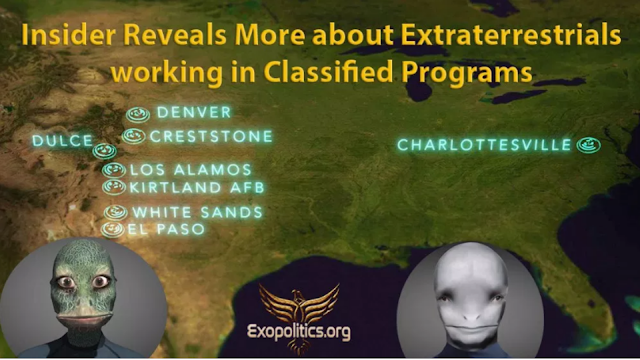 Emery Smith, a former US Air Force Surgical Assistant, has revealed more about his knowledge and face to face interactions with extraterrestrials he encountered while working on classified programs.

He encountered the extraterrestrials at Kirtland Air Force Base, and other classified facilities in New Mexico such as White Sands and Dulce;


along with Denver, Colorado and Charlottesville, Virginia, all of which he has previously discussed on Cosmic Disclosure (Gaia TV).

In the July 10 episode of Cosmic Disclosure, Smith talked about encyclopedic databases with extensive information on different extraterrestrial races he was shown after he began working on the classified programs in 1992 while stationed at Kirtland AFB:

After a few years in the projects and your clearance gets up and you’re getting briefed on different scenarios and different types of extraterrestrials where they’re saying they’re extraterrestrials or beings from other than Earth origin, and also getting access to the most amazing libraries of encyclopedias that they have there it’s all on computer mainframes you get to really understand that we’re just a small, small part of such a wide and vast array of other beings that are spread out through the universe and multiverse.

Smith’s information dovetails with what Corey Goode, another insider discussing classified programs involving extraterrestrial life and technology, says he encountered while working on a U.S. Navy created secret space program. Goode says he was given access to smart glass pads which contained classified encyclopedias on extraterrestrial life and advanced technologies. 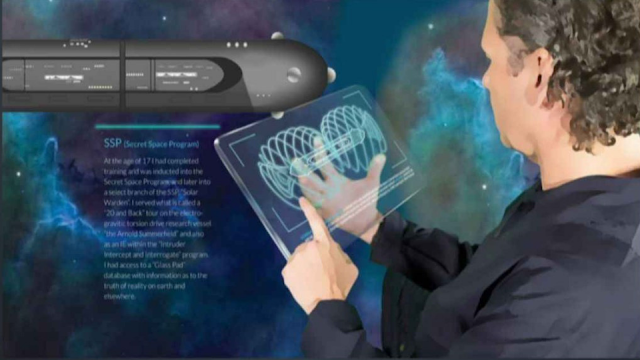 This is a very, small part of a large well researched post on Exopolitics so we suggest that you get your coffee out and a small notebook to take notes as it's a very informative and unbelievably good knowledge read. If your in to the strange, mysterious and Alien plus UFO (possibly real information) then your going to be blown away by this information.

There's many theories and many people think it's all a well orchestrated story line by Ufologists and other people "actors" with nefarious reasons nd are been put up to it by agencies threatening their lives because they know how much they can sway the "alternative thinkers" or the paranoid bunch so-to-speak you know, supposedly like me or UFO Sightings Footage as a whole? Plus there's other reasons to throw people off the scents, like money from tech, politics, future dynasties, control and power and security.


People will always believe in and think about Aliens and UFOs, there's just no getting away from that - so they have to steer you the believer (and me) in the direction that they want you to believe in. If your there, well then your not focused on them!

Just don't get your hopes up or get your sights set on Alien disclosure (they've been saying it's coming for decades) yeah, I'm talking about the "public Ufologist figures" they've got books to sell, they've got cards to sign (for a fee of course) they need you to constantly believe Alien disclosure is coming!

They've got a business that depends on it. If you take anything from this information alone, please be objective to everything and everyone - who knows who has been compromised and who is doing it for the money. If you walk blindly down a street your bound to find yourself in a situation that you can't control, what that means is this:

Blindly believing in what sounds plausible to your beliefs, from likable, educated people is a good way of that "someone" controlling you. If your always going to believe in the plausible sounding Alien story or well thought out story that they couldn't possibly know, but they heard it from a whistleblower, then good luck.

If your aware of the reasons why governments and other "hardcore agencies" are actively covering up Alien beings, then you'll know that they are capable of anything at all.

Absolutely anything! Like a long serving celebrity Ufologist delivering disinformation.


Common sense works but sometimes you need more than corroborated evidence from a whistleblower and plausible evidence? Sometimes it needs you to say no way, that's not real and I don't care if the President said so. Why, because "I can't be sure who's telling the truth at all?"