Oldest Human Fossil Ever Found Is Redrawing The Human Timeline

The earliest known human fossils are always going to pop up. This is the most spectacular because it predates the earliest known human fossil till that point by half a million years which is amazing. The human timelines are yet again having to be rewritten and a new piece of the jigsaw has just been added to the very confusing "family tree". Our very distant early ancestors had that many different evolution bursts that the tree of life is literally sagging under it's own weight of branches coming off the main tree trunk. It's fascinating to see these new discoveries but there's always something unnerving that we keep finding new cousins? I mean, what next? Which branch did our intelligence come from and the one with the insatiable appetite for survival at any and all costs? We're definitely not like the other animals in the kingdom of God that's for sure. But it's one confusing and very unusual species let me tell you. So, just who are we and what will the meaning be of changing the timeline of humans? Why do we continually keep looking for new fossils of humans, just what are scientists and science as a whole looking for? That is the real mystery. 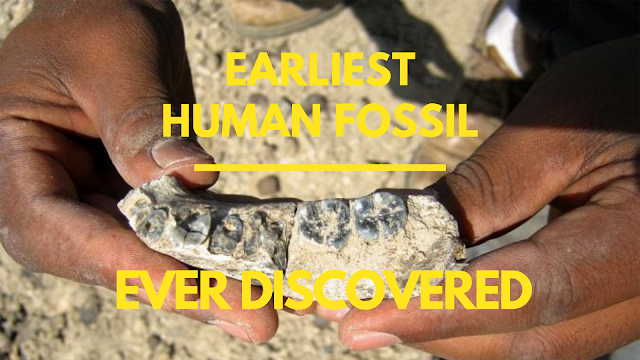 This jawbone, shown steps from the place where it was spotted by Arizona State University grad student Chalachew Seyoum, puts the first members of the human genus Homo in the Afar region of Ethiopia half a million years earlier than previously thought.


The family tree has changed guys, we added a new cousin to the tree of life only a few years ago. I'd like to welcome to the group LD 350-1. Lol. This is an exceptionally special discovery as the last earliest discovery was LL666-1 dated to 2.3 million years ago. It's fascinating because when the timelines keep getting rewritten, we need to really ask the question "what's the deal with these so-called scientific facts"? Mmmh?

Right, so everytime we find another early human fossil it then instantly becomes the earliest known human fossil, fact! But really we should be calling it a "part time fossil fact". Is there a name for that? It's always going to be bested by another even earlier petrified fossil, that's just the way it (the egg and the Chicken scenario) so it's got to be described that way, right? But what, how and where. It might be me nitpicking but please call it something else, just give it a name. My best example is to call it a part timer fossil.

OK, so here's this amazing "human timelines are wrong yet again, post" Check this out:

Discovery pushes back the origin of our genus, Homo, by half a million years.

In a rare congruence of new evidence, two fossil jaws cast a fused beam of light on one of the darkest mysteries in human evolution: the origin of our genus Homo. The two lower jaws one a reconstruction of a pivotal specimen found half a century ago, the other freshly plucked from the badlands of Ethiopia point to East Africa as the birthplace of our evolutionary lineage.

The new Ethiopian fossil, announced online by the journal Science, pushes the arrival of Homo on the East African landscape back almost half a million years, to 2.8 million years ago. The date is tantalizingly close to the last known appearance, around three million years ago, of Australopithecus afarensis, an upright-walking, small-brained species best known from the skeleton called Lucy, believed by many scientists to be the direct ancestor of our genus.


The new jaw, known as LD 350-1, was found in January 2013 just a dozen miles from where Lucy was found in 1974. "This is exciting stuff," says paleoanthropologist Donald Johanson, who discovered Lucy. The Afar, part of the East African Rift Valley, has yielded many other prize fossils of hominin members of the extended human family including the previous earliest known Homo specimen, an upper jaw known as AL 666-1, dated to 2.3 million years ago. (Learn more about Ardi, another human ancestor from the Afar region.) 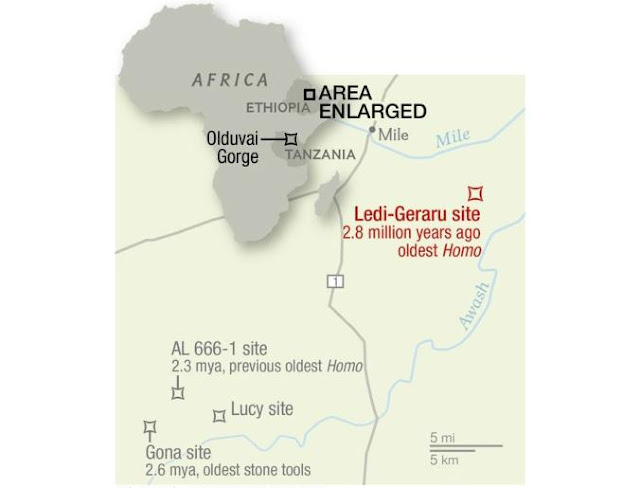 Fossils attributed to Homo in the period two to three million years ago are exceedingly rare. Bill Kimbel, director of the Institute of Human Origins at Arizona State University, in Tempe, who co-led the analysis of the new specimen, once said that "You could put them all into a small shoe box and still have room for a good pair of shoes." Among the features placing the new fossil in that singular shoe box are slim molar teeth; a particular pattern of tooth cusps; and the shape of the bony body of the mandible all traits shared with later Homo. But the front of the jaw sports more primitive morphology, such as a receding chin line, characteristic of A. afarensis. "This narrows the time period in which we can now focus our search for the emergence of the human lineage," says Kimbel, who found the AL 666-1 jaw in 1994. "It's very much a transitional form, as would be expected at that age. The chin looks backwards in time. But the shape of the teeth looks forward." 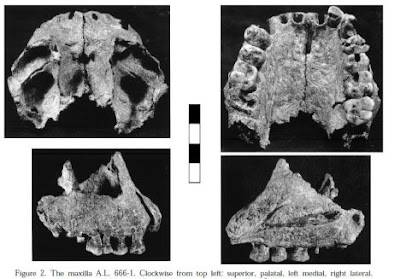 East Side Story To the extent that the new jaw underscores an East African origin for the genus Homo, it would seem to confound the argument made by other researchers that the best candidate for our genus immediate ancestor is a South African australopithecine, Australopithecus sediba. The authors of the Science paper point out that the only known specimens of A. sediba are almost a million years younger than the new Homo jaw from Ethiopia that they would have had to have given rise to. Fred Grine of New York's Stony Brook University, however, counters that there may well have been other populations of A. sediba, or something like it, far older. (Learn more about how A. sediba shook up the human family tree.) "The idea that [the new jaw] makes anything else unlikely to be an ancestor is ludicrous," says Grine. "That would pretend that the fossil record is complete. And we know it can't be, since they just discovered something that wasn't there before." 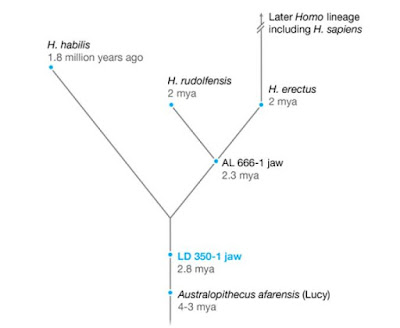 Guy's the post is long, it's a very, very good read so we've only referenced it a bit so that you can check it out for yourself. There's that much information to take in that you need to be bookmark it on National Geographic. It's by a very reputable source and as we know it's from 2015 you can be assured that the information is correct as they have been updating it as time as gone on. But back in 2015 this was sensational news. This is a refresher for you so that the timelines of your knowledge can be synced and you know you have the right information always. Cheers guys, your always amazing.