Pentagon Admits To A Secret UFO Investigation For Five Years

The Pentagon by its very definition is a secret organization, agency and guys, this is just the tip of the iceberg and I really mean the tip of the iceberg. The information that the Pentagon is in possession of would blow your mind. It knows not only about UFOs operating here on Earth but it also knows about Aliens operating here on Earth. the meetings at least on one occasion took place on the International Space Station. The ISS is a hotbed for UFO activity in the first place, but throw into the mixture meetings and Navy jets chasing UFO fleets then it becomes clear that there is more than one Alien entity known to the US government and now the Navy personnel and now the world. This is UFO disclosure and this is Alien disclosure. They will not spell it out for you, they will hold your hand and walk you through it. You either understand the information they give the public or you don't.


What does this mean, it means a few things to be honest with you and that the Pentagon lied when asked if they have ever or are actively looking into UFOs. But I understand that the Pentagon can't just go around giving out top secret information to anyone who asks, on ongoing or very secret investigations.

The difference is this though, they made up stories and ridiculed certain people, said that some individuals were lying traitors, they said that whistleblowers were working for "enemy countries" and basically, they destroyed people's lives just because "someone" felt the public didn't need to know.


It wasn't a law that said the public do not need to know, so it was an individual(s) at the Pentagon who just "decided" that nobody else needed to know i.e the public and they wrapped their own judgement in a loophole which you might of heard of:


"On the grounds of national security".


In the grand scheme of things, coming clean (so-to-speak) on what we already suspected was happening makes this a shame, a tragic shame that people and their careers, reputations and families had to be destroyed and suffered in every way imaginable then there's the humiliations from professional colleagues.
Continue further below -


Quote:
The New York Times said the project, parts of which remain classified still to this day, received $22m (£18.7m) each year, hidden away in US Department of Defense (DoD) budgets worth hundreds of billions of dollars.


My reaction is this:

Why hidden? Why does the (DoD) have to - or feel the need, to hide the cash? Is The New York Times trying to tell us something there with the word "hidden" (as it's a peculiar way to phrase it that a government department is hiding money) that they know about, but can't or won't say? 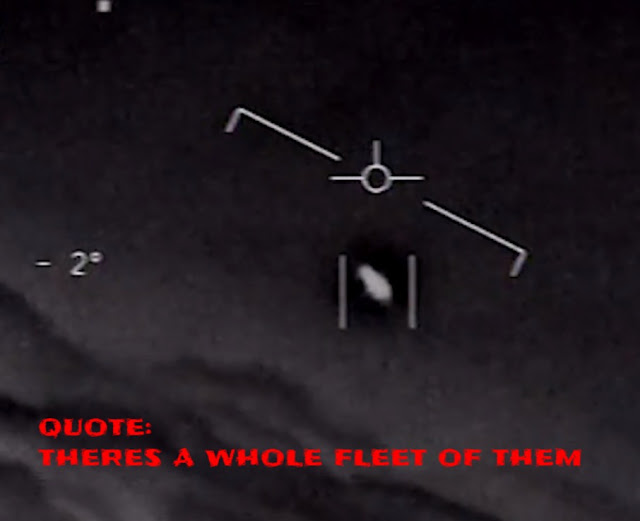 This is probably why there's lots of suspicions surrounding probably all the defence agencies? Maybe this is why people inherently mistrust the so-called big protection agencies...


Continue - And worst of all, friends who now see them in a different light because they've been manipulated by the government and big powers that be. All because individuals at the Pentagon took it upon themselves to make that decision based on their own judgement and not the law!


Unless you count the official secrets act...

Then have the cheek, the cheek to release this UFO video which validates every single one of them whom went on record to say that UFOs are real and the US military and government knows about it.


That's the most tragic part of the whole UFO disclosure project (if it even exists) of this video. It goes right back to that date in particular and then forward from that date.

I can't say for certainty if they knew before the date of filming this UFO but my suspicions are that they did.

Here is a part of the story I researched online and if you could check out the full story, that would be great because the more information we all have about Ufology in general the better and specifically the better informed we are?

The links are in the source section (below) which you will always find at the bottom of every post that we have done.

If UFOs are real, then surely that means Aliens are real? Or does it mean that it's Demons, as I've been told they are many times before...

The truth is finally out there, after the Pentagon admitted it ran a secret UFO investigation programme for five years until 2012.

The truth is finally out there, after the Pentagon admitted it ran a secret UFO investigation programme for five years until 2012. The US defence department’s own “X-Files” operation, known by the less catchy title of the Advanced Aviation Threat Identification Program, was closed after a change in funding priorities, it said.

But the remarkable revelation has raised more questions than answers, including whether the programme has been completely shut down, or just covered up further.


While the Pentagon claims it ended five years ago, it said it continued to take seriously “all threats and potential threats to our people”.


The Navy And The Pentagon’s Mysterious UFO video:


A video shows an encounter between a Navy F/A-18 Super Hornet and an unknown object. It was released by the Defense Department's Advanced Aerospace Threat Identification Program.