Strange Asteroid Might Be A Lightsail Of Artificial Origins

Oumuamua was a massive news article when it was first announced and it was said to be an Alien craft just entering out solar system, it is absolutely stunning. It's a cigar shaped "craft" or Alien spaceship depending on who you speak to or ask? It was declared by very clever people and it was looked into and researched for a long time before it was published as an official scientific paper., This is a great time to get your Alien proof and evidential "fill" so-to-speak as it will no doubt get pulled from circulation eventually like they all do.

In a new study, astronomers from the Harvard Smithsonian Center for Astrophysics say asteroid ‘Oumuamua could be a giant solar sail ‘sent from another civilisation to look for signs of life’.

The study - Could Solar Radiation Pressure Explain Oumuamua’s Peculiar Acceleration - was conducted by Shmuel Bialy, a postdoctoral researcher at the CfA’s Institute for Theory and Computation (ITC) and Professor Abraham Loeb, the director of the ITC, the Frank B. Baird Jr. Professor of Science at Harvard University, and the head chair of the Breakthrough Starshot Advisory Committee. 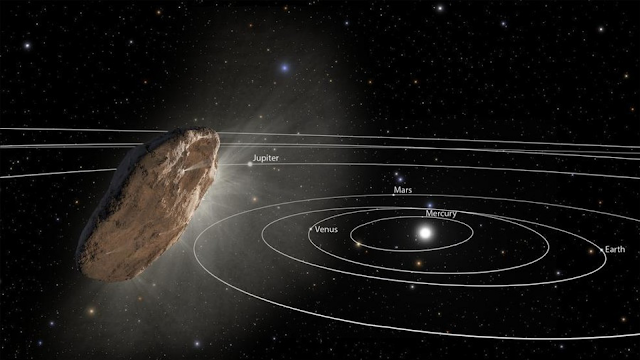 These astronomers have analysed the strange cigar shape of the object, and an unexpected boost in speed and shift in trajectory as it passed through the inner solar system last year.


There's something strange to this that's for sure.

The researchers say the strange acceleration could the the result of solar radiation pushing a giant artificial solar sail.

Lightsails with similar dimensions have been designed and constructed by humans, including the Japanese - designed IKAROS project and the Starshot Initiative with which he is involved. 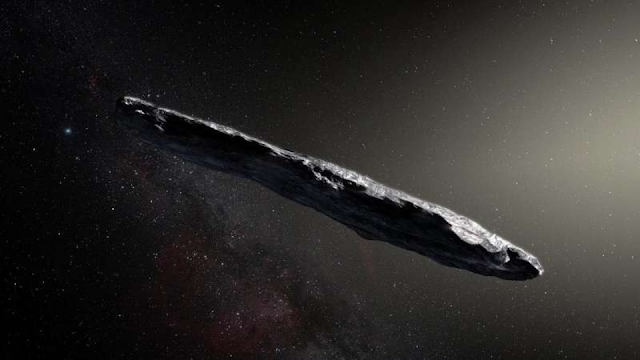 A sail that was only a fraction of a millimetre thick (0.3-0.9 mm) would be sufficient for a sheet of solid material to survive the journey through the entire galaxy.


But they propose some alternatives to this theory also:


Alternatively, a more exotic scenario is that Oumuamua may be a fully operational probe sent intentionally to Earth vicinity by an alien civilisation,’ they added.

Another option, which explains the lack of communication, a lack of any kind of signal could mean the giant object is actually an ‘alien shipwreck’.

You can read the whole study here.


Oumuamua (1I/2017 U1) is the first object of interstellar origin observed in the Solar System. 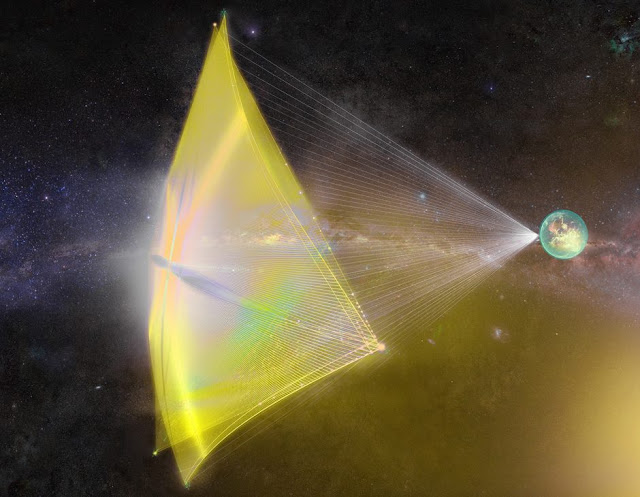 
The observed trajectory is best explained by an excess radial acceleration ∆a ∝ r −2 , where r is the distance of Oumuamua from the Sun.


Such an acceleration is naturally expected for comets, driven by the evaporating material.

However, recent observational and theoretical studies imply that Oumuamua is not an active comet.


We explore the possibility that the excess acceleration results from Solar radiation pressure.


This is a great bit of science.


We find that although extremely thin, such an object would survive an interstellar travel over Galactic distances of ∼ 5 kpc, withstanding collisions with gas and dust-grains as well as stresses from rotation and tidal forces.


We discuss the possible origins of such an object. Our general results apply to any light probes designed for interstellar travel.

Source Institute for Theory and Computation.