Theres lots of definition, shape and obvious unnatural elements to this epic Alien "mega Sphere". Never in the history of this channel have we ever seen such a craft! This isn't a trick of light, it's not a hoax or Photoshop project by a student. Guys, there's life in the universe and as you should appreciate "if we're here and it's taken just 2K years to become an interplanetary species, then please believe me when I say this:
To believe that we're all that the universe has to offer would be a very limiting and stunted approach to all of what we have become as a human being. We're constantly being taught to be open minded, be optimistic about your future and believe in yourself. So, to start with, believing that we're the only being in the universe is not being open minded and deeply limiting ourselves.
Life is so varied and abundant here on Earth and if I know anything about nature is that everything is mirroring each other either in the bigger picture or on a parallel level. The universe could be like Earth in so much that life is varied. Just on a large, epic large scale. To my knowledge, lions don't see fish and bears dont see chickens. Nocturnal and diurnal animals don't see each other but they are there and if you closely, you'll be able to see the clues.
Engross things or enlarge them to a similar pattern in different things and you'll discover that everything is connected by this. It could be what characterises this dimension versus another dimension? It could be our universal fingerprint, the one tbing that binds us all to this time.
Here's my new theory or "updated version of my earlier post".
It looks like a huge Ezekiel’s Wheel type UFO which was spotted In our solar system by NASA’s Stereo Ahead Camera SAC. 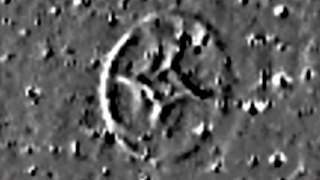 The image above is by the satellite stereo telescope.
This is exactly what it is, it's an impossible to build by humans space city. It's not a planet and it's not a small comet or Asteroid, or even a Sun! That is why it's hard to get your head round it, I can't even get my head around it.
But it is what it is, literally.
If we're going to go down the literal route then let's just put it all out there with no B.S.
As far as I know, humans are not building Sun sized colonies in deep space. NASA put this online for a reason, that's obvious because it's still online.
Here's a bit of sarcasm:
All they do is say, it's a known spacial wave effect with as yet unknown unknown quantities of "fart particles" drifting on an unseen intergalactic highway if you will, where the F.P's (they like their acronyms) particularly participate in a sort of universal waltz and then when the particles of methane are satisfied, they drift near to the Sun.
Which is what we're seeing here in the Stereo telescope images. A sort of blah blah blah.
Then all the Government sanctioned scientists around the bend, I mean world (scientists who have degrees) all regurgitate the same message from NASA.
Publish a paper, even toilet paper and scientists stick their finger in the air, see who's backing it and then decide to either get on board with it or not?
It's a farcical joke!
This is my way of telling if it's real or not:
Is it a real image, yes.
Does it looks unnatural, yes.
Does it look intelligently designed, yes. Has it got impossible shapes and designs - you bet it has.
It's definitely not human made.
It's quite simple really.
It's therefore Alien, because no matter how unbelievable or hard to believe - whatever is left after narrowing it down must be the answer. That's my interpretation of Sherlock Holmes quote.
This is the actual Sherlock Holmes quote:
“When you have eliminated the impossible, whatever remains, however improbable, must be the truth?”
S. Holmes.
I'm glad that I have decided to have this as a rule so-to-speak, because after this UFO information first hit the Internet running, everyone and their Donkey have covered it with it being a 50/50 split.
That tells me a few things:
Theres a truly unique look to this large "planet sized UFO" which I insist is not what I would expect from a passing planet in its own orbit would look like.
Let's look at this planet: 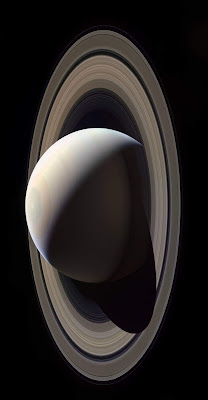 That's the only planet that is ever going to look like the thing recorded by the Stereo telescope. It actually looks a tiny bit like it, but there's no X shape cross section going through the middle of the "thing". 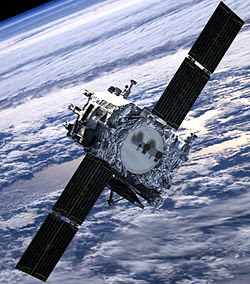 What the jelly on a plate is that? It looks like space invader crisps from the UK sold at corner shops. In fact, it looks Kinda like a pretzel or a space ship or a city in space with the bicycle wheel design or... Yeah you get the picture, I could go on all day long saying what it looks like - just to prove a point.
Go to another object in space and see how many things that might look like? This "object" and it is an object looks like a lot of things because it has to many features for a space object.
It has evenly spaced depressions, it has a center with straight lines converging in the middle of a circle object whi h has a very even bezel which is the same width all the way round. 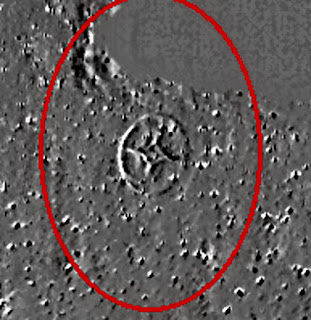 There's a lot going on if you want to look at it and actually break it down in such a way - because I know that it's artificial in nature, that's the only reason I can break it down.
If it was a Moon, then all I could say is that it's spherical in shape, it looks like a snooker ball and... That's it.

I believe that it's called a "obvious artificial celestial satellite" because it bloody is! 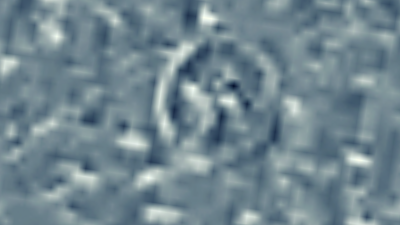 Theres a very intelligent look to the design of the UFO. Its got a doughnut type of shape with a middle that has a star symbol. 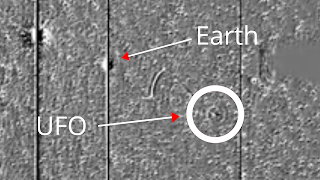 Many things about this UFO are extreme! 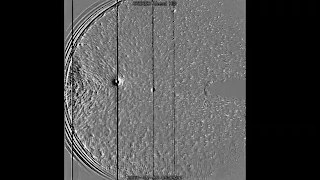 The above images are from a telescope that films in stereo. We see it moving, it's on a deliberately different orbit to anything known by NASA, astronomers etc and it's moving so, so fast.
The YouTube channel Giorgio Mariotti has gone in to this in lots of details. Whereas on the flip side, Live Science "tried to Debunk" this by saying NASA has clarified this as something to do with the planets lol.
They're bloody talking about a triangle in the middle of the screen, to the right lol. They go in depth as well about how this triangle UFO is not Aliens, NASA has cleared it up.
They've been rumbled seriously, they refer to the "conspiracy theorists" they're are at it again, mistaking NASA research for a hidden Alien agenda blah blah.
They've totally got it wrong, the actual UFO is the spherical doughnut shaped UFO and not the Triangle shape stereo satellite screen design?
I don't know what the Triangle shape is that's on the screen but I do know that NASA must have been providing Live Science with info about the Triangle anomaly (I say sarcastically) but the "conspiracy theorists" are actually on about a totally different thing in the screen.
Did NASA really talk to Live Science?
Are they just putting out disinformation because that's what they do?
I don't know about that, but to claim that NASA has been talking to them about this conspiracy and had even cleared it up, well that's extremely frigging suspicious.
How can "NASA" clear up a supposed UFO that's been misidentified...
That makes about as much sense as purple Carrots. In fact, let's go one better and only look at this from a fact point of view.
The NASA Stereo Telescope link.
Also the:
NASA Solar Terrestrial Relations Observatories, known as the STEREO-B spacecraft link.