The Truth About Aliens and UFO'S

In a recently leaked memo (2018), the FBI has confirmed the existence of extraterrestrial life.

Though the claim is now being denied by the bureau.

People are sending tons of UFO related videos every single day through our various reporting platforms.

Project Blue Book shines a light on what the Governments of the world really do know. It also shines another light on just how nefarious, murky, interwoven and very scary lengths the Governments are willing to cover up what they know about Aliens. 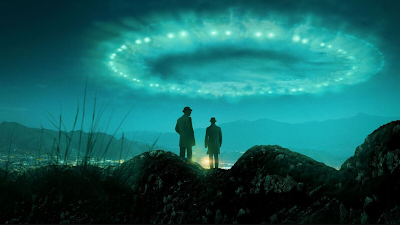 Believe me there's more to UFOs than anyone can really imagine.
It's both a man made mystery and a very real Alien phenomena.

I've provided the 3 different videos that restores faith in my UFO beliefs and Ufology as a whole - for every believer it's still good to have information that reinforces that belief.

It's now May 2020 and yes we've been proved right in one way but there's still a lot that the Governments of the world can do to fully admit to, the existence of Aliens!
This news article from 2018 states this following information:
The "original memo" is from the early 1950’s and talks about a UFO being discovered by the government in New Mexico. Of course, in typical fashion the FBI more recently have denied it, claiming it to be a "fabricated hoax" designed to mislead the public!
That may, be, so... I say very cautiously because aren't they reciting a phrase from their own playbook? Aren't they supposedly denying that they get involved in that stuff but yet here they are giving us full chapter and verse?
This is why they "usually" say nothing because if they comment on it, it means they are talking about it, conversing about it and more over - that means they have an interest in it.
When in their reality, or in their own world - they should be denying everything, admitting nothing, saying nothing and making no reference to anything about it!

But we know better now, is this proof that they lied...

Fast forward from the 1950's to the awesome year of 2019 and there you have it in black and white, but not in typed word form on paper, we get the UFO disclosure we've been waiting for but instead it comes in the very same form which was denied by the Government for many decades "a UFO video" in black and white (actually in FLIR) but it looks black and white lol - which is ironic to say the least.
The videos are below this awesome Alien chap:
Multiple UFO videos was declassified and disclosed after they was cleared for release by the US Government no less and actually they didn't have the courage to do so - so they got the DoD to do it, which they quickly asked the US Navy to do it.
This is the same Government which vehemently denied the existence of UFOs and even put people into asylums once upon a time, and prison!
Let's get back to the present day and gather our thoughts.
So, UFOs are now a scientific fact. They're a matter of fact and a revelation which went over the heads of pretty much everyone.
But why?
Because of the terminology in which it was disclosed. They are now to be referred to as Unidentified Aerial Phenomena or UAP's. This is exactly why it went over many peoples "literal heads" if you ask me because the three distinctive and somewhat crazy sounding letters UFO wasn't used.
That's a master stroke of genius re-branding if you ask me because it took the spotlight off UFOs even though it was UFO videos, it kind of wasn't or - to some lesser degree (if you like?)
Related website with great UFO videos is UFO News.
That's all because the spin doctors at the White House didn't want to called it an UFO which means Alien vehicle, an otherworldly spaceship, space craft by another name! You can guarantee that's why they didn't want to call it a UFO video - even though that's what it bloody was!
Related website with even more UFO videos is Ufosfootage.
Now that's a master stroke in deception, misleading, misguidance and a perfect example of how politicians do business. So, we (UFO researchers) should of seen this coming by a few decades or so?
We know UFOs are real so, it was just a matter of time before it was released and we should of focused on how they (the politicians) would try to disclose this information?
You know, cover the angles, read up on the history of information delivery by deceptive politicians maybe and take a leaf out of their books?
But, I don't feel bad for not doing so - it just proves that it's not in my nature to think like that.
This, together with the constant History Channels incessant questions of "are UFOs real" or "we take a look at the evidence" all still suggests that it never even happened!
They're still implanting seeds of doubt as to whether these UFOs have even been disclosed because their tones would suggest otherwise!
Video 1
The Smithsonian Channel, The History Channel, Nat Geo are all "still" playing re-runs of UFO TV shows which are still asking the basic Ufology questions of which we all know the answers to - in fact they've been answered by the United States Navy and Department of Defense - the DoD.
Video 2
There's no updates in the credits of these TV shows, there's no reference to the released UFOs (oh sorry UAP's) so it's still being asked "are Aliens are real" or are UFOs (sorry I've done it again UAP's) real?
I'll never get used to calling what I know to be UFOs as Unidentified Aerial Phenomena or UAP's.
Video 3
It's maybe because I don't buy in to this absolute hogwash of a deceptive practice.
More and more evidence is coming out that proves UFO’s exist and that we have been visited by alien lifeforms.
Please leave a comment and share, thank you.
Source Exemplore.
Source UFO Sightings Footage Instagram.