White Sky Rods Are Coming To Light Through Cameras

These Sky Rod UFOs are one of the most puzzling and puzzled over sky phenomena (anomalies) of modern times.

Because these "Sky Rods" have seriously - only recently started to come to light because of modern digital cameras, the eye can't see them at all.
In this image below, the base jumper is being filmed by a friend who doesn't notice the white Sky Rod until later on:
They're way to fast, they're so different from what we have seen before that it's a possibility that they could be monitoring us from different dimensions.
Check out our sister sites at:
www.ufosightingsfootage.uk
www.ufonews.uk
www.ufosfootage.uk
Yes,you heard me right the first time, monitoring us from another dimension. Okay, if that's hard to believe then let's take a look at the evidence:
But, for now I'll start with the classic "where do you think they came from" because as you can see, they exist but are to fast to see in real time.
Sky Rods caught on camera around the world: 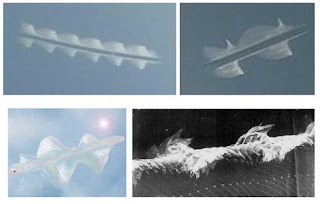 Only slowing down the video footage can we get a look at this amazing and potentially unknown Alien species.
I've been researching UFOs since I can remember and I do remember coming across these many years ago.
People are accidentally catching these on their digital cameras. 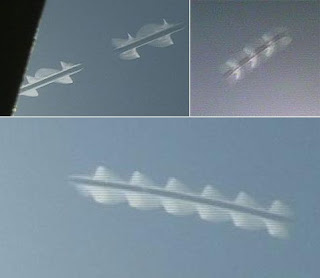 But my limited understanding of pretty much all that Ufology had to offer led me to conclude that it was not real and that was instant, based on nothing more than me looking at it and not liking its "look".
Very scientific, lol.
And that's because of my pre-judgements, lack of understanding, lack of any thought processes in terms of understanding Ufology and how to research Ufology.
Also I lacked in the one thing which anyone who wants to further ones own Ufology knowledge is "open mindedness".
Around the world - people everywhere (on any given day)  have a similar experience, it's the "I thought I just saw something"?
Or the one where you could have sworn that you just saw something move out the corner of your eye?

Guy's, there's an argument against these being real UFOs or if they're creatures. There's a thought provoking website article on "Aminoapps" called Air Rods. You can check that out here, it's the argument against it being anything of note so check it out for a balanced and informed decision at this link.

We've all had that experience and even though you never saw anything, who's to say that it wasn't one of these White UFO Sky Rods?
Here's the awesome YouTube video by Aerial Extreme:
The video is unavailable from Aerial Extreme for some reason? Sorry guys.
YouTube quote:

Prepare to be mystified as you witness the discovery of a new, and as of yet, unidentified flying creature. Caught on camera while taping other events, these creatures stretch the imaginations of us all.

Described as a long skinny rod, hence the name, they are propelled by undulating wings which appear to cover the entire length of their bodies. It would appear that they have gone unnoticed due to their lightning fast speed. Only recently have they revealed themselves, evidently due to the proliferation of video cameras.