This is one of the best UFO Orb formations that I've ever seen because it's the only one I've ever seen! This UFO video is about as rare as it gets.

This is one of the most UFOs in a video that I've ever seen. 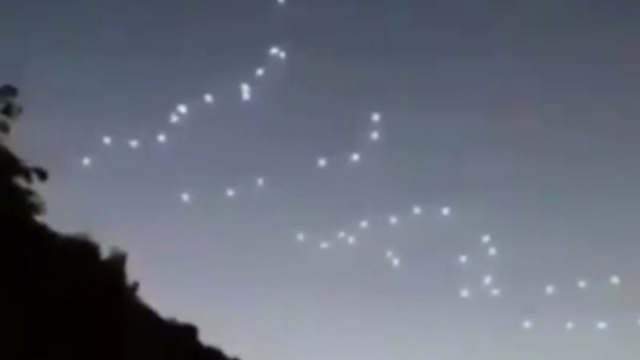 Image source Google Search/Canva/UFO Sightings Footage.
Firstly I would like to thank you for your time and say that if your common sense tells you that this isn't real then that's all good. But, like me I truly believe that this video is real and that the UFO Orbs in the video are quite genuine.
This image below shows the UFO Orbs just before they all get into formation. 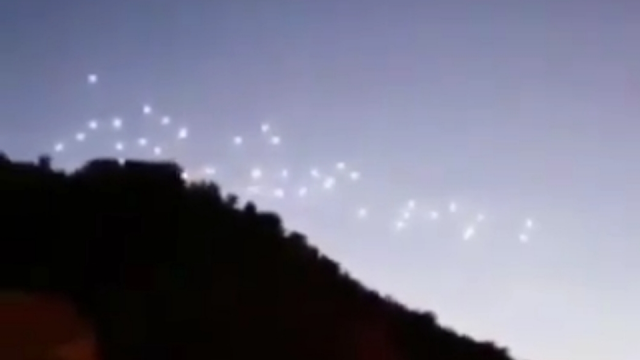 Image source Google Search/Canva/UFO Sightings Footage.
Of course it could be a huge laugh at our expense and we could find that some poor unfortunate soul feels the need to poke fun at a UFO believer...
This, for me, isn't in the latter category but I do think it's healthy to keep an open mind in Ufology and understand that it might be from a movie (which I doubt) or it could be a bored student desperately trying to impress someone who doesn't even like him or her. It's sad but it happens.
Then there's the national UFO believer targeting agency (I don't think it is a real name) whereby people are tasked with putting out believable UFO videos to create doubts about Aliens and UFOs in general. But in a broader sense that if they flood social media with dubious UFO videos it will create more uncertainty around Alien disclosure and UFO disclosure.
UFO disclosure has been and gone. It pretty much went over everyone's heads and that's because it had a different name to;
Unidentified Aerial Phenomena or UAP.
These UFOs are real, they're all in formation in such numbers and therefore they can be seen from a far off distant point in space. It probably isn't anything to do with it but it's worth mentioning that potentially this UFO formation could be seen from far away in space.
There's no information with it, there's no point of reference to say where it was taken from and who's the eye witness and when it happened?
But that's okay because it exists, it's a good point of reference for researchers to say that a possible UFO encounter has taken place here?
And that's awesome!
Here's the very remarkable UFO video:

Please leave a comment on why it is real looking to you and also why you think that it might not be real? Either way, cheers for your time and effort.
Source: Google search.
Source edit: Canva.