UFO Definitely in The Video of WW2 Flag Raising Ceremony

The second world war saw a large UFO increase and one was caught on camera during a flag raising ceremony on the Japanese Island Iwo-Jima. UFOs exist.

This is one of histories most iconic WW2 VIDEOS, the re-enactment of the flag being raised on the Japanese Island of Iwo-Jima.

Alien and UFO expert Scott C. Waring has got the ability to see what's hidden in plain sight (in my opinion) because he is questioning everything and that only comes with having glimpsed the truth. 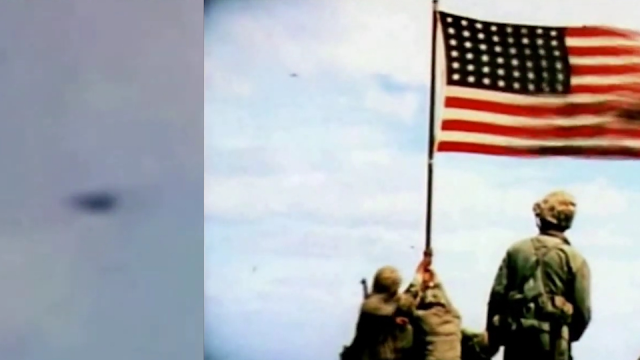 Image Credit Wikipedia/Joe Rosenthal/Associated Press/UFO Sightings Footage.
The truth, there's a few truths believe it or not? There's the Government sanctioned truth and the authorised history truth and then there's the "I was there truth" regarding history. Also, there's the covered up truth about history, then there's a manipulated version of the truth to suit needs and the "nobody knows truth" that is pure speculation but passed off as the truth or misconstrued truth. You can apply history to every single category I've just listed. But, it's the covered up history I'm mostly interested in because therein lays the real truth!
So, what is the truth? It's definitely not common sense as this fools everyone(most people) more often than not. A gut feeling is a good place to start but still it's not the truth. So, to me anyways, the truth is time.
Time will only tell - and - you can rely on time. Because you don't need to do anything, just wait and be vigil and the truth will always find you, it will reveal itself.
Time is the big revealer and that's the truth you can rely on.
Here's just one example of time being the biggest and most reliable way to get to the truth!
Quoted from Sputnik News;

There is 10-30 seconds missing from this historical film! Why? Because someone else also saw it and wanted to remove it from US history," he wrote in his blog. "However, they did a poor job and the cut is not only deliberate, but obvious to all who see it."

Waring also speculates that his find is proof of aliens being capable of "time travel to any place or moment in history to watch humans and study them," though he doesn't elaborate on the time angle.
Here's the excellent video by Scott;

I love it when published videos and official articles, stories if you want and re-enactments are discovered to contain a lot more than meets the eye. Some have a lot going on and haven't been noticed before.
The results are possibly far reaching, life changing and historically, significantly - different to what everyone knows. Just like this UFO in what the world believes is a WW2 flag re-enactment...
Source Sputnik News.
Source Reference Scott C. Waring.
Source Iwo-Jima Flag Raising Wikipedia.