This is a new UFO discovered by Graham at Conspiracy Depot. The UFO is silver and in Antarctica. I think that this is really on Google Earth.

This Antarctica UFO video was posted on the 10th June 2021 to YouTube channel Conspiracy Depot and it's the most real looking and blatant UFO in Antarctica that I've ever seen.

I'm going to go out on a limb here and say "I bet you've never seen this Antarctica UFO before on Google Earth" have you? It's only recently been seen on Google Earth by a guy called Graham at Conspiracy Depot.

There's absolutely nothing in the area to get it confused with, it's been measured at 60 feet and it's more than likely in a Triangle shape although I'm not sold completely on this idea. But either way guy's, what a corking find by Conspiracy Depot. 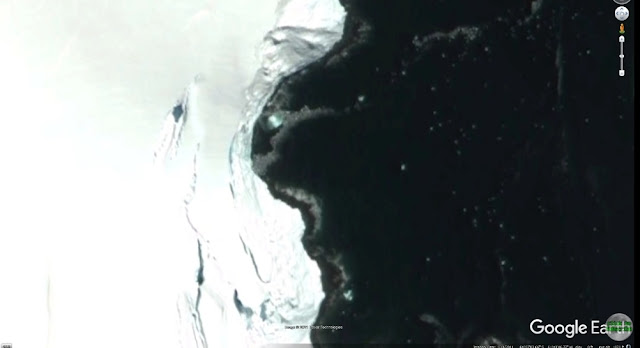 Screenshot (above) of the silver metallic UFO in Antarctica.

Judging by the size of the UFO (roughly 50 to 60ft) and the fact that this UFO is more likely submerged (it looks to me like it's half Submerged anyway's) but that also means potentially that we could only be seeing a small proportion of the unidentified unit.

If that is the case then this isn't a small UFO but a huge UFO and it could be a Mothership, a vessel to take on board other UFOs? Yes perhaps people may laugh at that opinion but anything is possible.

It could also be a top secret submarine of an unknown size and shape or type even? It's silver, it's what looks like a round object and it's in Antarctica. It shouldn't be there! End of speculation, it's not supposed to be in that place where we can clearly see it is. Military aren't allowed in Antarctica full stop, I've just looked it up - unless it's research or delivering supplies.

Everyone, everything and anything that is going to Antarctica has to be given permission, logged, tagged and bagged as they say. The reason is because of the Antarctica Treaty which came into effect on June 23rd of 1961. Also it's the environmental impacts, and pretty much all the usual things that must be done before you go on holiday "as well as" except it's Antarctica so there's a few other steps you must take. Follow this link for specific information.

Antarctica is still the most sparsely populated place on Earth even though there's just over 50 research stations there. The fact that it's only got researchers there mostly means that people literally don't want to go! It's freezing, boring, there's no official infrastructure whatsoever (except for the US's secret military/non military bases and underground facilities, tunnels and present day excavations, connecting tunnels and endless empty spaces continuesly being created) it's a destination that normal people will swerve.