Here's probably the best UFO sighting from a plane that there is. The eye witness filming this said he was glad to have the foresight to record it.

This one's different because we have the eye witness filming this talking about it while he's filming it.

We can hear lot's of people on the plane talking about the UFOs at 4 minutes into the video. The UFOs are flying in and out of the clouds. 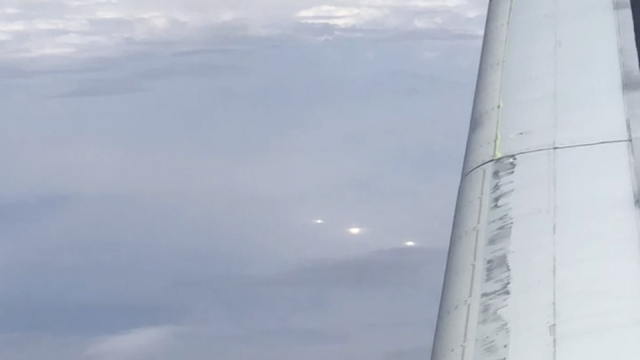 Credit: MUFON/UFO Casebook YouTube Video/UFO Sightings Footage/UFO News/Canva.
It's the people talking about them and they're really shocked and stunned even, just by their presence outside of the plane. One woman say's something about them which I'm not going to repeat in writing lol but it was enlightening.
Related post
5.6 Miles Above Atlantic Ocean Is A UFO With Piercing Blue Light
At One point there's 4 UFO Orbs and the guy can be clearly heard saying "there's one in front of them" which is referring to another white UFO Orb. I'm really liking this one to be real because instead of the usual suspect UFO superimposed onto a person's holiday recording from an airlines window, this one's different because the eye witness is talking about what he's seeing out the window. 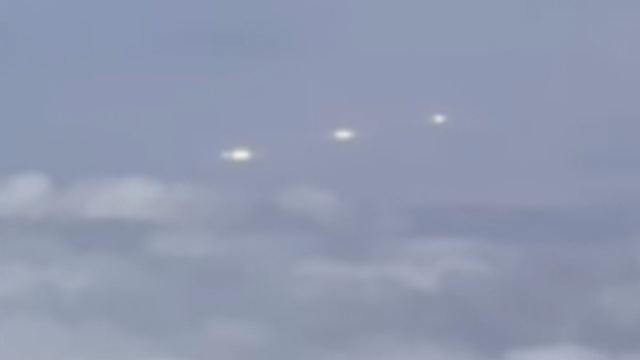 Credit: MUFON/UFO Casebook YouTube Video/UFO Sightings Footage/UFO News/Canva.
For me, it makes all the difference as probably all the ones I've seen regarding UFOs out of the windows of planes never have people talking about them. It's these smaller UFO spheres (usually Orbs or Spheres) which are the most numerous and have now been confirmed by the Pentagon, CIA and the Department of Defense (DoD) and other agencies publicly acknowledging that bona-fide UFO crafts are actively involved in flying in Earth's atmosphere and flying into the oceans. Unfortunately that's where the camera footage of these real UFOs - UAPs stops as the Flir cameras are spectacular but they can't film underwater. The fact that this UFO incident occurred in the visible spectrum and the shape that they are is good news because it insinuates that the UAP UFOs can either switch from been seen in the visible light and back to Infrared only.
Related post
The Clearest Flying Saucer Ever Taken | The Greatest Secret In Human History
This is the eye witness video description and statement:

New York - 07-09-18 - Flying to LAX, I noticed the bright lights out the window. Did a second take cause I first thought it must be a reflection. Used my Iphone 10 to record it and could tell almost immediately it was in fact an actual object(s). The lights would go in and out of the clouds, change elevation and location from my particular viewpoint. I’m assuming it took place over Nevada based on the time. If you look closely, a white blinking light appears randomly both in front and behind the object. This object when viewed by human eyes was white and glowing. Lost sight of it after 5 or 6 minutes as it slowly went behind the wing. In a commercial airline so was traveling at least 500mph. I felt beyond excited because I knew then I was seeing something strange and was grateful to have the foresight to record it.

Here's the actual full video provided by the eye witness which was uploaded to MUFON and UFO Casebooks YouTube Channel:
Please share your thought's and opinions also any ideas that you might have about this amazing UFO sighting filmed from a plane that's heading towards LAX (Los Angeles Airport. I'd also really appreciate it if you could share this post with someone who you think would appreciate it, cheers.
The full sighting details, reported to MUFON and UFO Stalker, and UFO Casebook. Case 93655.
Credit: MUFON/UFO Casebook YouTube Video/UFO Sightings Footage/UFO News/Canva.