UFOs on ISS live feed are one thing. But finding ancient Alien evidence is another, because this is science and not opinions it's a good thing.

This is brilliant news, albeit something that people already know, it's just that NASA and the ESA are "teasing out" information bit by bit.

A recently published paper on 1st November 2021, (Nature Astronomy) has shown us that NASA's Curiosity Rover have made some huge biological discoveries on Mars's Bagnold Dunes. These unrivalled, but very necessary building blocks of life have been sat in a crater on Mars, shouldn't they have degraded by now, just saying is all. How are all these surviving? 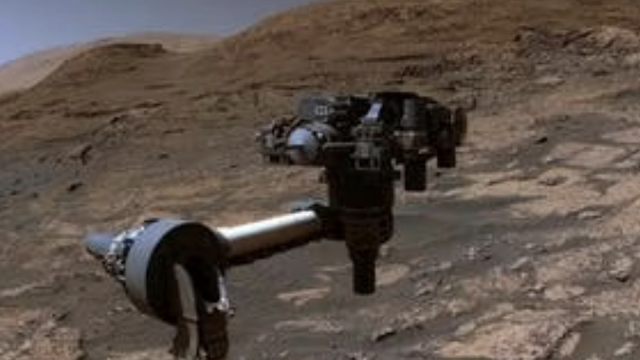 Credit: NASA/ESA/Inverse/Nature Dot Com/UFO News/UFO Sighting's Footage/Canva.
Or, is it that these acids can't live that long, they can't last this long in space - can they, in a very horrific Mars environment? So my questions are very simple really. How have these numerous acids lasted so long? Why don't they degrade over time, where did they come from? Is it life how we know it? Is it life, as in intelligent life, or is it just primordial soup kinda life because that's not really life is it.
My most important question is left for now!
Why are they (NASA) chasing ammonia acids when UFO crafts are constantly and I mean constantly, blatantly and in our faces keep on turning up at the ISS? It doesn't make sense to me why NASA isn't investigating UFOs which the Department of Defense has already confirmed it's position as these UAPs are real. They obviously got past NASA's ISS cameras.
Related post
I Can Prove Alien's Are On Mars | Check This Out
"Discoveries" of biological acids that have been there since ancient times, they must have. But because of what we know, biological benzoic acids and ammonia acids which are the most important biological discoveries means what exactly?
NASA is absolutely a stickler for the rules and although it hurts big time that they won't investigate any of the ISS UFO incidents or any of the astronauts testimonies, publicly investigate anyways!
It looks like they're building up to a bigger picture, part of a bigger picture of one day proving with science that life in space is irrefutable and beyond maybe definite into the realms of "scientifically it's a fact".

No amino-acid derivatives were detected. However, chemically derivatized benzoic acid and ammonia were detected. Mass spectra matching derivatized phosphoric acid and phenol were present, as were several nitrogen-bearing molecules and as yet unidentified high-molecular-weight compounds. The origin of these compounds, including those that may be internal to the Sample Analysis at Mars background, is examined. This derivatization experiment on Mars has expanded the inventory of molecules present in Martian samples and demonstrated a powerful tool to further enable the search for polar organic molecules of biotic or prebiotic relevance.

The rover has a built-in Sample Analysis at Mars (SAM) instrument that measures organic chemicals in samples collected by Curiosity on Mars. Meanwhile, Perseverance’s design gives priority to the sample return aspect of the mission. NASA is going to be taking samples from Mars and is gonna be sending them back to Earth for extended analysis.

It's amazing what is happening with space and space exploration. Things are moving on and technology is improving rapidly.

Check out the published papers and the links I've added. It's all fantastic information and it all leads to historic moments and that's why I thought I'd link you all to this great stuff.

Here's a great visual aid for just what's been discovered on Mars by Videonium's Channel YouTube:

Please share your thought's and opinions also any ideas that you might have about this latest information on ancient Martian Alien building blocks of life.