In 2008 NASA took photographs on Mars and they show what only looks like tree's. The life on Mars argument is nothing new. There seems to be life.

This is a spectacular NASA photo taken in 2008 of a region of Mars which shows what I really think looks like trees, bushes or some sort of Mars vegetation?

I totally understand how it sounds, but look at it. Theres no way it's from a dust storm because that's exactly what NASA wants us to believe. It has the classic tree structure and the branches even look like they're growing out from a central stem. It can't be just me that is seeing this as tree's or branches from a plant type of life on Mars.

In the subimage (which is this actual photo below) falling material has kicked up a small cloud of dust. The color of the ice surrounding adjacent streaks of material suggests that dust has settled on the ice at the bottom after similar events.

Also discernible in this subimage are polygonal cracks in the ice on the dunes (the cracks disappear when the ice is gone).

So, it's apparently dust on ice lol. 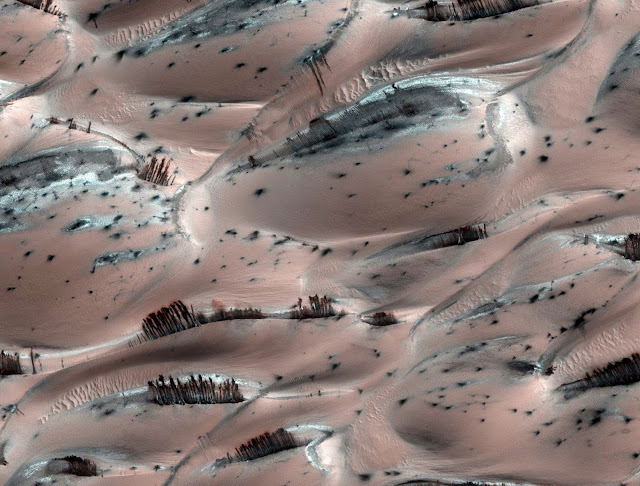 The image above is absolutely untouched in any way shape or form. Here's the photo's official NASA Hirise link and the photos particulars quote:

There is a vast region of sand dunes at high northern latitudes on Mars. In the winter, a layer of carbon dioxide ice covers the dunes, and in the spring as the sun warms the ice it evaporates. This is a very active process, and sand dislodged from the crests of the dunes cascades down, forming dark streaks. 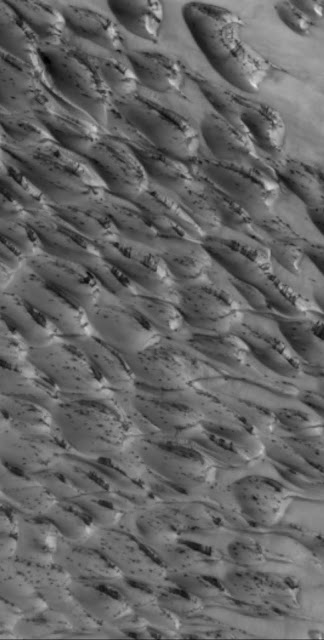 Here's the link to the full NASA Hirise photo.

NASA has been photographing Mars for a long time, this photo along with other strange features on Mars have been released onto their online archives. I honestly believe that NASA has never admitted to life in space but the evidence is there for anyone who wants to see it.

There's so many different Mars anomalies that it's indisputable proof of life on Mars. There was ancient Alien life on Mars and right now evidence point's to there been life there right now just like tree's for example. And, that's just one example from a vast ocean of evidence. I'm sure that if your reading this then your already aware of the other strange anomalies on Mars...

Here's a great video showing the tree's on Mars in a news article on abc 7 news TV uploaded by ChrisJr2007 YouTube channel:

Guy's, please keep an open mind and make sure you pay attention to what you are actually seeing - regardless of what NASA says that we're seeing, I know what I am seeing anyways. Please share your thoughts and opinions and share this post if you don't mind, cheers.