Area 51 has a unacknowledged UFO visitor in the form of a UFO hovering over the USA facility in Groom Lake, Nevada. It's a very real looking UFO.

After watching the video, I'm stumped but only because of what it actually says at the end of the video segment.

I wasn't expecting it to say that it's not being proved or disproved and that it might be real or not - well that's the jist of what it said. But if you look at the very first UFO in this 5 part video UFO montage, you'll surely agree that it looks absolutely real?

It's thrown me through a loop but if it's CGI then it's bloody good!

It state's that the UFO video was submitted anonymously and remains anonymous but it also suggests that it's not actually proven to be CGI? But, let's just put a pin in that bit of crazy talk. Putting all that aside for 2 minutes because if I'm being honest, I really like it but now I don't know what to think.

This UFO image below is a snapshot from the UFO video, it looks so real in the video and it looks like it's actually there hovering because it fit's into the video like a glove with no sign of a hoax or copy and pasting into the video. I really can't tell the difference on this video and that's why I'm saying "just keep an open mind".

Because it's better to look for more information on it than not and it turns out someone else has a video of if from a different angle or radar evidence crops up. Even an engineer could come forward and blow the whistle on a top secret Area 51 UFO program? There's a lot of reasons why we should keep it on the table so-to-speak. 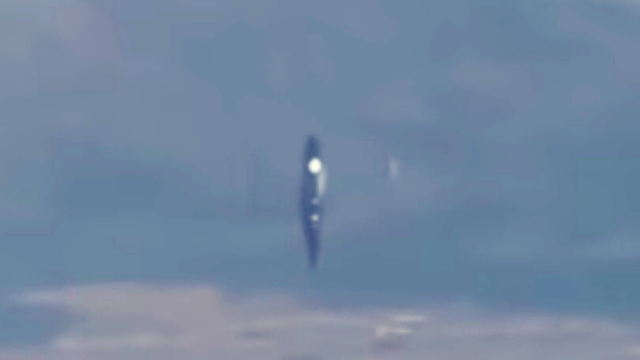 There's probably nobody more dismissive than me (although I'm working on it) when it comes to Gaudy looking UFOs and if I'm not dismissing it then I can assure you that until we at least have more information, we must and I want to stress to you that point, we must at least keep it on the table and keep an open mind about it.

If we can't even tolerate this UFO video then what's the point in researching UFOs? We should pack up the stall and go home instead to bake a cake and talk about politics.

Instead of researching Ufology I should call it "hand picked UFOs or UFOs according to what I like." I'm not going to go down that road of only looking into the UFOs that I like - because if I dismiss the one which does turn out to be real then that's not good.

Here's the YouTube video which is called 5 Mysterious Alien and UFO Sightings in Area 51:

I truly hope that this UFO is real, it does matter if it's not real because it means that someone is out there deliberately faking UFO videos and UFO photos.

In terms of funny, it's not even "chuckleable" and that's not even a word! So, before you make your next fake UFO video, stop and think to yourself this "what are you getting out of it" because I can guarantee you that your only gain is people thinking your a buffoon.