This is the scary moment when a person was filming out of the window of a plane only to be caught up in a UFO sighting. Imagine seeing this UFO.

If I was bored and whiling the hour's away on a long plane journey I'd probably be filming out of the window as well just like everyone else does, right.

But, seriously "what the hell do you do" if a Cigar shape UFO flies past the actual plane that your sat inside of and it's so close to the plane that you could put your hand out the window of the now rapidly decompressing plane, because you opened the window to touch it, lol?
I am only trying my best to look into, the most real looking UFOs or the more better looking UFO sighting's anyway's because I tend to find it easy to recognise a fake or a CGI craft against a high probability of being a real UFO. It's common sense and I know that you've got it also. 👍🏻 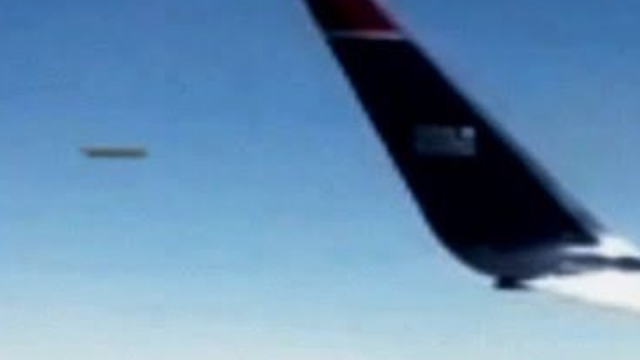 Credit: LooknowTv YouTube video/UFO Sightings Footage/UFO News/Canva.
There's absolutely no way it (this UFO) can't see the plane because it's the biggest thing in the sky and it's right in front of it. I would be thinking why is it flying so close to us? Are we gonna be hit by the UFO and if it doesn't hit us, will it cause any damage or turn off the electronics so we plummet to the ground... 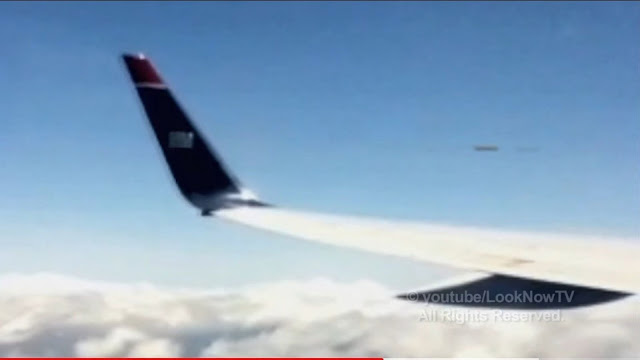 Credit: LooknowTv YouTube video/UFO Sightings Footage/UFO News/Canva.
It's definitely real because it's so hard to fake the blurred imprint as the video is slowed down to half the normal speed we can see that the UFO starts to blur between the frames and when we see it solid again, that's on the frame rate ie 60 frames per second is normal for HD I believe. So seeing it blurred between frames is apparently spot on. I was learning up about how to spot fakes at different frame rates and to be honest with you, photo forensics is blooming marvellous because it gives you (if your interested in learning it) lot's of tools so-to-speak in your arsenal to spot these fakers!
I can also understand that some people get super bored on long haul flights and have a plane window, smartphone and an app to edit images and out fake UFO PNG images into a video they've literally just filmed ut of the window. But it's no excuse for people to then pass it off as a real UFO sighting. Oh but that's definitely not what we've got here as this has a high probability of being real. I might add though that this is just my opinion based on years of researching and getting a good understanding (in my view) of how to spot fakes.
Listen, nobody is perfect and I'll be the first to admit that I've backed a few Donkies in my past only for them to be proved either a fake or totally missidentified as a B movie segment. But that's only because someone set out to deceive people and unfortunately I fell for it or was duped but that's only because I am human and not super human. Seriously, it happens right.

This UFO video though, I'd definitely put money on this being a bona-fide real Silver Cigar Shaped UFO. If it's not a real UFO sighting then I'll eat a pair of socks and laces (like noodles).

It was actually filmed over Hawaii and although it's got a short description on the YouTube video it really is a little known UFO event. In the description it says thank you to the anonymous person for sending them it. So, at least the person filming it had a sense of responsibility and mind to actually report it. It was probably sent in because the eye witness realises how important documenting a real UFO sighting is and that's such an awesome thing to do, everyone should be aware of that course of action. I'll add the UFO video description just below now:
YouTube video description:

A stunning UFO flies by plane window! A passenger caught this intersting UFO on tape on a trip to Hawaii. This is a must watch UFO sighting. Thank you to the anonymous person who gave us exlusive rights to this awesome footage. Thanks for watching & sharing!

Here's the extraordinary YouTube video:
Please share your thought's and opinions also any ideas that you might have about this belter of a UFO sighting and if you've seen a silver type of UFO from the window of a Jet then please tell us all about it and don't spare us the details. Get detailed, lol. Also if you think that someone will like this or will definitely becable to shed any light on this UFO encounter then please share it, cheers.
Credit: LooknowTv YouTube video/UFO Sightings Footage/UFO News/Canva.