Buzz Aldrin admits to seeing a UFO following them and he wasn't stupid and so didn't tell ground control about the light following their craft.

Finally, after years of speculation and opinions based on something that a friend of Buzz Aldrins said we've finally got it from the horse's mouth so-to-speak. Buzz Aldrin is one of Americas most admired and unforgettable astronauts. He's straight talking (now at least) and always giving us great facial expressions on live TV especially when US Presidents are "over reaching or over exaggerating" to the people at home and basically filling the air with wishes. 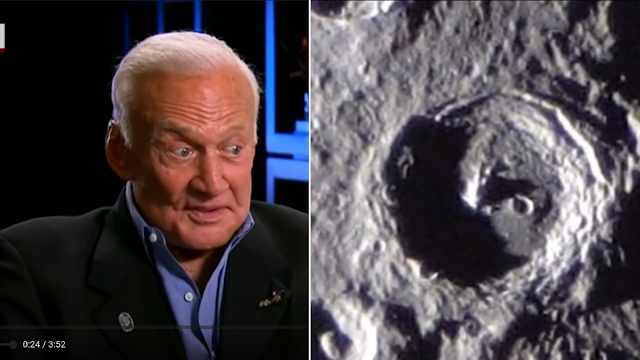 Credit: NASA/SyFy Channel/History/Entertainment Tonight YouTube Video/UFO Sightings Footage/UFO News/Canva.
Buzz is there giving it the best forehead squinting and disbelief look that I've ever seen. It was when Trump was giving the famous space speech with Buzzing pulling faces.

It was almost as if he was stood there shouting "I do not agree with that" and by the way, your gull of it. That's good old Buzz, that moment in TV will go down in history.

Anyways, Buzz was on SyFy's "Alien's on the Moon" and he walks us through exactly what he saw, he tells us in not so many words also as an extra that if the astronauts were to see UFOs, they didn't just blurt it out. Which in of itself is telling us about the "NASA wall of silence" that it demands from all it's astronauts. It's now the 29th July, 2022 and Buzz still hasn't changed much about telling the truth.
But then they employ Buzz Aldrin and the wall comes crashing down to the ground because he's told us things no other astronauts told us, heck combined he's single handedly bettered everyone who's tried to go on record with an insinuation. This is Ufology guy's, insinuations are eaten for breakfast. Take a leaf out of Buzz Aldrins book and watch grid epic video uploaded to YouTube by Entertainment Tonight citing Buzz when he sat down to talk to the channel SyFy, when he talked candidly and without fear about Aliens on the Moon.
Related post
Head of NASA Bill Nelson Said That UFOs Could Be Alien Technology
Epic, this is straight up mystery 101 and "solved UFOs on the Moon" by the guy who's been there, the UFOs he's talking about, he actually saw! Then we have UFO disclosure from the DoD so guy's, UFOs are everywhere and definitely on the Moon. Humanity is under surveillance!
Buzz Aldrin quote:

I saw this illumination that was moving with respect to the star's. We we're smart enough to not say "er Houston there's a light out there and it's following us." So, technically it becomes an Unidentified Flying Object.

Straight from Buzz himself!
NASA has a bad track record of investigations into UFOs and it's probably never gonna agree with the US Government's release of the 3 DoD (Department of Defense) reasons for releasing the videos. But they have and inadvertently the DoD has done more for the existence of Extraterrestrials truth coming out and telling the truth than a so-called purpose built NASA has ever done! That's hard to fathom no matter how many roses that I put with it.

While Neil and Buzz were on the Lunar surface Neil switched to the medical channel and spoke directly to the chief medical officer saying "they're here, they're parked on the side of the crater and they're watching us. SyFy Documentary Quote.

This video is eye opening and it's confirmed by a legend and you know and I know that saying we wasn't allowed to tell NASA there's a light outside and it's following us, is Buzz's way of saying "a UFO light" followed them but protocol dictated we did not use the public channel,
Okay, this video below is awesome, enjoy watching this and take what he say's as the truth, he's been there, he saw them:
Please share your thought's and opinions also any ideas that you might have about this amazing UFO disclosure by an American Astronaut legend. I'd also appreciate it if you could share this post with someone who you think would appreciate it, cheers.
Credit: NASA/SyFy Channel/History/Entertainment Tonight YouTube Video/UFO Sightings Footage/UFO News/Canva.