UFO Changing Shape Over Nellis Air Force Base Including Audio

This is a fantastic UFO sighting that occurred over the Nellis AFB in Nevada. UFO was filmed in the air space right above the test site which is real.

Nellis Air Force base had the craziest UFO encounter filmed from the test site and with the eye witness (military personnel) in communication with the control tower as they all watched this thing change shape several times.

But unfortunately, this is the crappiest piece of audio I've ever heard. Although the UFO footage definitely makes up for the audio, we do hear the people in the audio ask "what the hell is it" and other words but they're hardly audible. 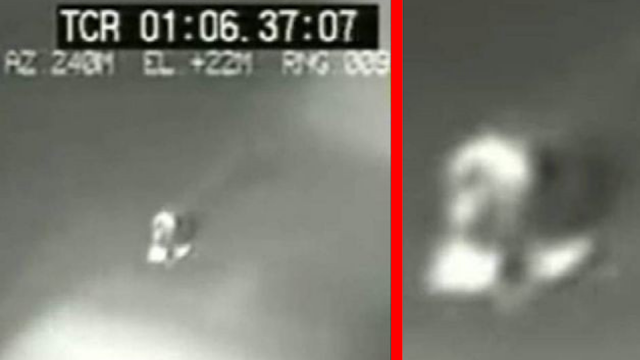 Credit: usaflorida5000 YouTube Video/US AirForce, Nellis AFB/UFO Sightings Hotspot/UFO Sightings Footage/UFO News/Canva.
Related post
Military Unit Recovering A Silver UAP With Vehicles in Siberia
How do military personnel have audible conversations with each other when the radio's that they're listening to aren't even fit for purpose?
It sound's like a garbled, barely recognisable piece of spanglish or like what an Alien being would sound like with helium. We know that this UFO incident occurred in 1995 on 30th May and that as well as audio it was filmed with the camera operator keeping track of the object which disappeared at 1:53 and reappeared at 2:03 all in the early hours of the morning.
In the 2 photo's below, I've shown this exact same UFO from the same Nellis AFB UFO encounter to have changed it's shape at least twice! This is unprecedented if you don't mind me saying so because it's an official military UFO and we just don't have this kind of thing, ever to be released to the general public. That makes this unprecedented UFO footage. 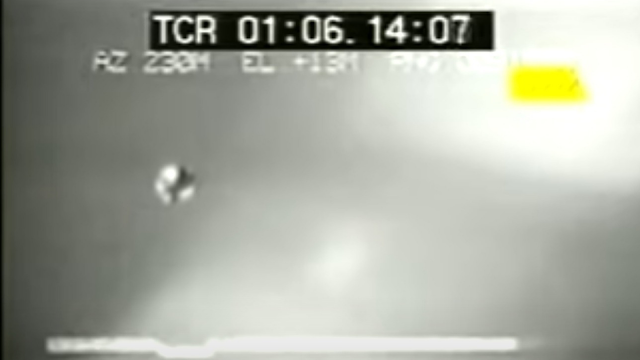 This footage is one of the most important pieces of uncensored UFO material that has appeared in recent years.
Unlike the censored Navy / Pentagon UFO videos from Tom deLonge, the images from this video are uncensored.

Apparently the UFO was observed changing it's shape several times and although it is in the dark with reflections and shadows that are constantly changing because the light's are mostly in a fixed position, we're talking about trained observer's in a test site facility. If ever there was an example of the best and most capable observer's in the world it would be military trained observer's from a test site facility which make it their job to "observe, analyse and remember" everything they're tasked with observing, right? There is no better group of professionals to witness this and give an accurate picture of what they saw, plus we have UFO video evidence. It is what it is for want of a better description. 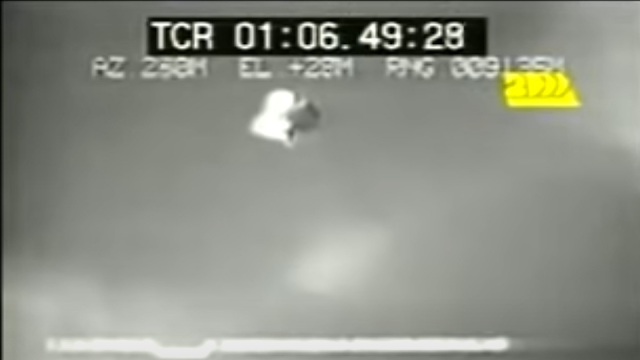 Credit: usaflorida5000 YouTube Video/US AirForce, Nellis AFB/UFO Sightings Hotspot/UFO Sightings Footage/UFO News/Canva.
So it looks like these UAPs have been here for a long time, far longer than either previously thought or previously admitted to? I'm afraid it's the latter which I believe because look how long it's taken for the US Navy and US Government to tell us the truth about what we already knew? It feels like we're supposed to forget their dishonesty and believe them wholeheartedly from now because "woops we made a mistake"! No, you bloody lied and you decided to tell the truth because you were caught in a lie. That's a big, big difference.
Doing the right thing came and passed on the day after this incident, actually come to think about it, that day was the day after "every real UFO sighting" you had the chance to tell the truth to the US people first, then the whole world.
Don't forget that this video predates all the recently disclosed UAP videos by nearly 2 decades! The military should have had a lot better video and microphone equipment, better than anything else or anyone else on this planet, it's unfortunate that they left the security of the base to a potato-like camera and a Karaoke bar microphone, but like I said earlier "it is, what it is".
Here's the actual video from usaflorida5000 YouTube video:
Please share your thought's and opinions also any ideas that you might have about this amazing UFO incident at Nellis AFB Nevada Test Site. It's historic in it's own right and I really do believe that it's related to the recent UAP videos and if it is, then we've possibly had the UAPs here on Earth a lot longer than people thought. I'd also appreciate it if you could share this post with someone who you think would appreciate it, cheers.
Credit: usaflorida5000 YouTube Video/US AirForce, Nellis AFB/UFO Sightings Hotspot/UFO Sightings Footage/UFO News/Canva.