I genuinely thought I did the "most UFOs ever filmed at once" post, not that blooming long ago, and then I come across this epic UFO video.

There's alway's a bigger UFO cluster just round the corner. It's a rookie mistake. First of all I'm gonna start by saying that this is not Chinese lanterns whatsoever! There's way to many and besides it's in the USA in New Mexico which is about as far from China as possible.
Related post
Mothership's Parked Insde Saturn's Rings Photos Taken By Voyager
Okay there's places further away but you get my point. After looking at the UFO video yet again, there's no way it's fake and I'm gonna stand tall behind that claim. Look at it, it's a dense pack of UFOs and it's the eye witnesses reactions to seeing these strange things in the night sky which is making me think that we're seeing something very different here. Sometimes we come across things that we can't explain or that we fail to choose the best words to describe it in full, and how we feel in that moment. But, all that the eye witness filming it can say is "I want my mum" or get my mum to facetime me ASAP. 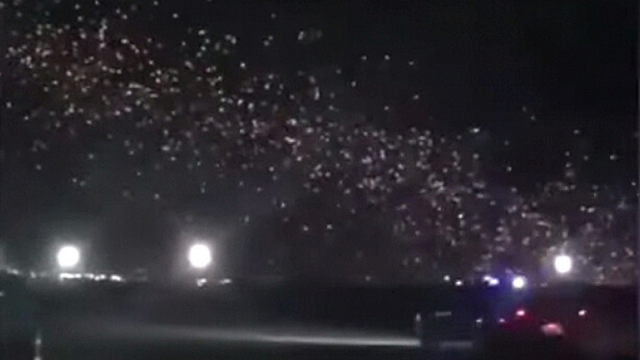 Credit: UFOTV -VIRAL YouTube Video/UFO Sightings Footage/UFO News/Canva.
I'm not complaining but I'd like to have had a decent close up into this UFO pack. Right into the middle of the UFO would have done me fine. C'mon it's tons of UFOs amassing in the sky, everyone in the Ufology world would give their right arm to witness it. If we could have had a zoom into this "UFO super cluster" I'd be a bit more happier. Although it does look like a traditional Chinese style celebration, it's in New Mexico so we've got to "no, we must" throw away that idea or thought train. It's a Chinese celebration and this is the United States, that theory about lanterns and just how many there is, that idea, opinion or whatever you wanna call is out the window so fast it's already in the water treatment plant after navigating the drains.
Related post
Top Secret Flying Saucer Filmed in 1992 it's To Big To Be Man Made
Below is a Police car driving in the lower right bottom corner of the UFO video. I've only just realised that it was tgere! Is this why the eye witness filming it is so shocked because he only just started filming so what else can he see right there and then while he's filming it but more to the point I'm trying to make, what else "has he already seen" and is what he's already seen what is affecting him and his speech. He almost sounds dumbfounded or lost for words even. Like he's seen something that has blown his mind, right? 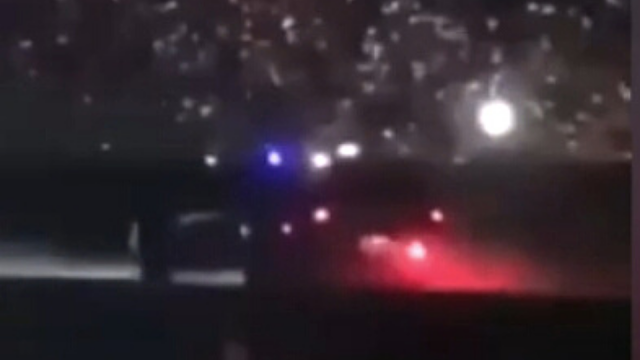 Credit: UFOTV -VIRAL YouTube Video/UFO Sightings Footage/UFO News/Canva.
I just didn't think it could get any better than that last UFO cluster what with it been so large. I think calling something the biggest UFO sighting or the largest group of UFOs etc really should be done so but only after extensive research on it has been done. It's because there's an old saying that state's "there's always something bigger round the corner" and it's true in this UFO case. So, not long ago, about a month ago or so I think, I was researching a large cluster of UFOs over Miami in Florida or should I say in the skies of Miami.
Related post
The Most Detailed Silver Flying Saucer Over Hull England
Which at that time was a huge, probably the largest concentration UFO I'd ever seen or come across up until that point. Actually it was about 2 months ago not one month. Some of the UFO videos I've seen have turned out to be Chinese lanterns or real bona-fide swamp gas. But this one is absolutely amazing, it's standing up to inspection and scrutiny. There's no way it's fake, but if this is a fake UFO then someone has gone to a lot of lengths.

It's gotta be a strange thing to see you know, a very large number of UFOs all moving in the sky, all at once in the same direction. They all look the same and they're giving off a strange, weird vibe.

The eye witness in the first UFO video is 100 percent confused and is literally asking for his mum. I don't mean that he's still crying and sobbing kind of get my mum. I'm not sure if this is a load of Chinese lanterns or some sort of celebration like Chinese new year or a birthday celebration maybe?
But I do know candle lit lanterns are usually only lit at night-time because they want them to be seem and light up the night representing a wish or a prayer.
Here's the UFOTV -VIRAL YouTube video:
Please share your thoughts on this amazing UFO super cluster that was filmed by a very shocked eye witness. I'm liking this one guy's, but if it was over China I'd be like "that's probably a lantern festival" or I'd more than likely have a very different but equally good opinion, cheers.
P.s
On Wikipedia I've looked up the word or letter's (whatever you refer to it as) UFO and its actually says that it's definition is:

An unidentified flying object (UFO) is any perceived aerial phenomenon that cannot immediately be identified or explained.

So when the US Government called the UFOs that the Air Force Jets chased "UAP's", they've actually indirectly called them UFOs, right? Based on Wikipedia's definition because of the word phenomenon. It's food for thought but the term UFO and UAP mean the same thing, according to Wikipedia.
Credit: UFOTV -VIRAL YouTube Video/UFO Sightings Footage/UFO News YouTube/Canva/Wikipedia Unidentified Flying Object.