I'm leaning towards the 3 fingered mummified Alien being to be real. I've seen the X-ray photo's and they look like they all came from the Alien.

This is a really controversial issue because on one hand (no pun intended) we have science and on the other hand we have pseudoscience or "free will and weed" and both were at loggerheads, until now it seems.

Pseudoscience is the embodiment of thinking it, it making sense, it's now become a fact because it makes sense.

What is the literal meaning of pseudoscience:
A system of theories, assumptions, and methods erroneously regarded as scientific.
pseudoscience
/ˈsjuːdəʊˌsʌɪəns/
noun
A collection of beliefs or practices mistakenly regarded as being based on scientific method.
"the new pseudoscience of counselling."
Via Google Search.
The Alien in this photo below has now been verified as a non human species, but a species nonetheless. What was the actual "conspiracy in the first place" regarding the Peru mummified Alien with 3 finger's? Believe me, there's a lot of people who don't believe it's real. With that in mind, I'm gonna research it, then I'm going to make a decision based on the facts.
Apparently it was a deliberate hoax but using other body parts from different mummified mummies? It was a hoax created by Mario and his gang, but apparently for no monetary gains and this Mario doesn't have a last name? I kid you not, that's the strength of the against argument!
These "Alien" Mummies appear to be a mix of looted body part's? That's a quote from the website Live Science. But guess what, the 3 finger Alien is covered in a white substance which is still on the mummies, so how do they know?
Everything in the Live Science website is opinion. Every single accusation is all nothing but one person's opinion. Seriously, I kid you not. It's apparently a hoax created by "Mario" lol. Just a Mario, no other name oh and his gang. Mario and his gang creating mummified mummies for no money just publicity? It's a new one on me, how about you?
If it's a fake then bloody prove it's a fake, c'mon guy's if it is a fake then there must be evidence of it. Find it, announce it, publish it and in the meantime stop talking smack and giving off wild unproven opinions. It makes "you" look like this person that your describing!
I feel like I actually lost a few brain cells reading it I swear instead of Mr Maussan lol. Listen, I do not possess any ability to know the whole truth about this. I honestly just read both sides of the argument and I make my mind up. I quote both sides, I pick out things I like because it's me researching it but at the end of it  I've usually come to my own conclusion and today is no different.
The Peruvian ancient mummified Alien being exists, the DNA tests apparently took place. Gaia.com has done their due diligence on this story and Dr Konstantin Korotkov actually exists. There are X-ray photo's of this Ancient mummified Alien and the remains still exist. 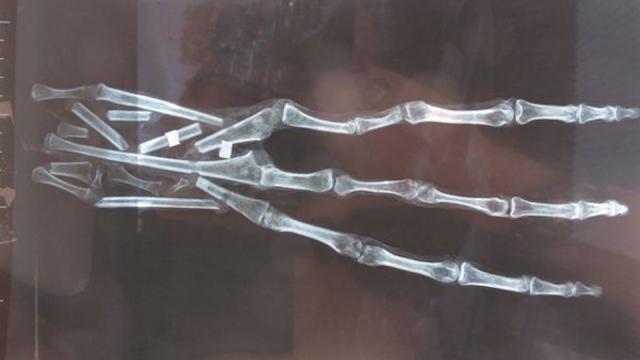 Credit: Gaia.com/Daily Mail Online/Express Online/UFO Sightings Footage/UFO News/Canva/Live Science.
But on the other hand (lol get it), every single accusation by the mummified Alien opponents has been an opinion only backed up with nothing. I kid you not, all of the horrible accusations are 100 percent views only, expressed by people with an ulterior motive. Not one fact or piece of evidence has been pointed out or even eluded to or put forward even. Here's the X-ray photo's which are apparently different person's all put together to create this. I don't know anyone who has 3 fingers or an elongated skull just kicking around the garage to lend them, do you? 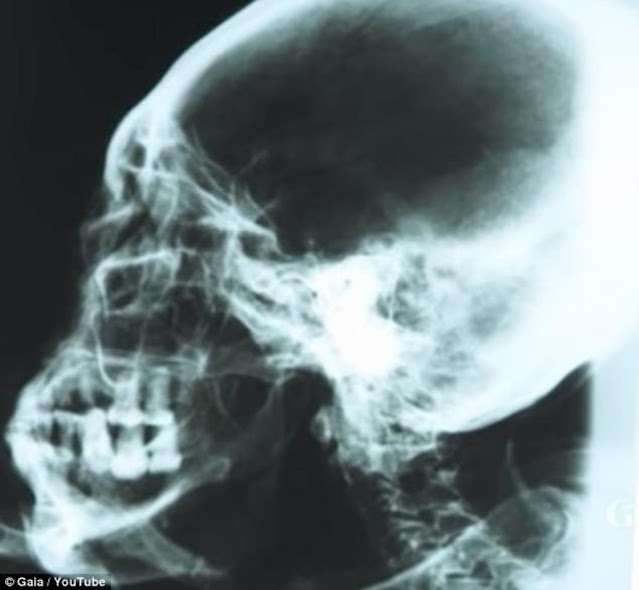 Credit: Daily Mail Online/Express Online/UFO Sightings Footage/Live Science/UFO News/Canva/Gaia.com/Wikipedia.
The Mummified remains of this Ancient Alien has now had it's DNA tested and verified. So, can you guess what the next chapter to this conspiracy theory is going to look like, or would you like me to tell you right now in a "I told you so manner" or would you like to wait and see your thought's play themselves out because they will? People are so predictable.

Quote:
The alien-hunting team behind the find claim that carbon dating samples of the body date it between 245 – 410 AD, though the validity of these tests has not yet been verified. Pictured is an x-ray of the mummy's skull reportedly taken by the team.

Look away now if you don't want to know.
The Russian scientist is going to be challenged as even existing, the DNA test is gonna be wrong and the Alien didn't yield any useful or usable DNA. It's all fake news and it's still in the museum under lock and key. Or, it's going to be called a hoax even though it exists and a Doctor has done the DNA tests. Apparently the Alien's body parts are from various other people and made to look like it does, that's why the white substance is covering the whole Ancient Alien, it's so nobody can see it. What about X-ray photo's, because there's lot's of the Alien X-ray photo's so it doesn't make sense what people are saying about it, here's a quick X-ray photo: 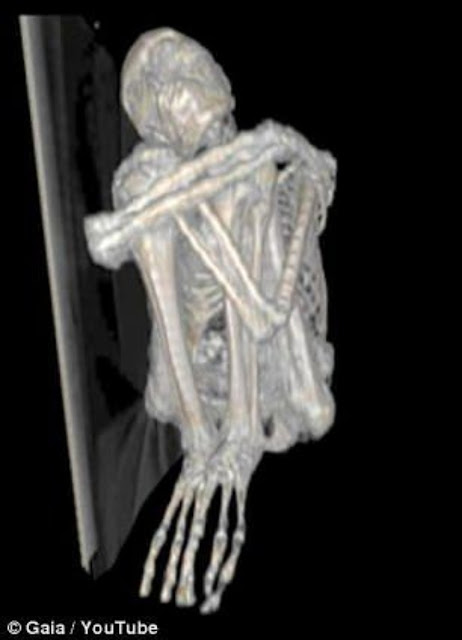 Credit: Gaia YouTube/Express Online/UFO Sightings Footage/UFO News/Canva.
It seems like I've proved my point so I'm gonna be finishing in a moment. But I'm glad that I've written about this amazing discovery because of the obvious hatred of the mummified mummies or Ancient Alien being's as it's opened my eye's a lot.
Related post
Google Mars Has Large Structures And Infrastructure And The Clearest UFO Ever
It seems like all the people hate just one person connected with the Mummified Alien from Peru, a one Jamie Maussan? It's come to light that he fleeced people who paid £15 each to watch a slide show of a real Alien being recovered from the Roswell UFO crash. This happened in Mexico at a UFO conference, and apparently he was part of this team promoting the mummified Alien being?
Quote:

The slides were said to have been thoroughly researched yet they were soon discovered to be pictures of a mummy in a museum exhibition.
'Jamie Maussan is infamous for promoting dodgy UFO videos and alien artefacts,' Mr Watson said.
It then goes on to state:
"He has cried wolf too often to be ever taken seriously by anyone with at least one functioning brain cell."

So, somebody paid the £15 it looks like and now is going out to say anything negative about the Mummified Alien. It looks like revenge to me because as I've pointed out, it's all "Yes all of it" has been opinions only! I will not take sides, I'll make my own decisions based on relevant information, thank you!
Anyone of those will do, but it will be challenged no matter what. It's just the nature of Alien conspiracies. Anyhoo, here's the quote from the Express Online website running the actual original story:

Now Dr Korotkov his team claim to have undertaken genetic tests on tissue samples taken from the mummy, as well as a second individual found nearby named Vavita, Sputnik News reports.
They said the bodies date back to about the 5th century AD and could be extraterrestrials or cyborgs.
But British alien expert Nigel Watson, author of the UFO Investigations Manual, said the finds are most likely a hoax.

Okay, wait a minute, back the hell up, did I just read that quote correct? 😳 So on one hand we have an accepted scientific method applied to a tissue example taken from the 3 fingered being and the results say it's a totally different species and on the other hand we have an everyday guy telling us it's likely a hoax?
So...
On one hand we have a scientific fact versus an opinion? And we're supposed to ignore science and the accepted facts over his opinion? Hmmm. Okay, that's hard to describe exactly but I think the letter's "w.o.w" will sum it up. Throwing doubtful opinions on something before making a statement of doubt regarding something does not make it so. I want exactly what the other half had, proof! The Dr had tissue samples and DNA results, he had the actual beings body. He has the X-ray photo's and all the new sayers have is "I didn't find it, I wasn't involved with it, so it's a hoax".
Seriously, is it just me or am I seeing this whole thing wrong? The Peruvian three fingered Alien entity now has an identity, shouldn't we be celebrating that and trying to figure out how it came to be? It's supposed from the 5th century AD which could be absolutely important to this chaps identity. The rise and or fall of a people's and the abandoned cities of ancient Peru could have a meaning as to why this guy is here on Earth? It's stuff of this nature which fascinates me because I do not believe in coincidences at all.
Was the arrival of the 3 fingered entity (and possibly other's) the start of the end for Peruvian civilisations or was it the beginning of a new start? Was this 3 fingered, elongated head, Alien species welcomed by Ancient Peruvians or was they hunted to extinction with this being the last one to exist? 🤔
Ancient Alien being's are here, either buried, hidden, stashed away or covered up and some are locked away. There's been some discoveries that have rocked the religious institutions to the core. I dare say that this Alien being with an elongated skull and 3 long fingers which nobody can recreate with real body pieces from donors.
Related post
Abandoned Ancient Alien UFO/Ruins On The Moon
Say for instance that there's Ancient Alien DNA manipulation going on today with modern humans bringing back long dead Ancient family bloodlines. What's the point in that, why would this look like a good proposition? Is it for money, is it for something else entirely? 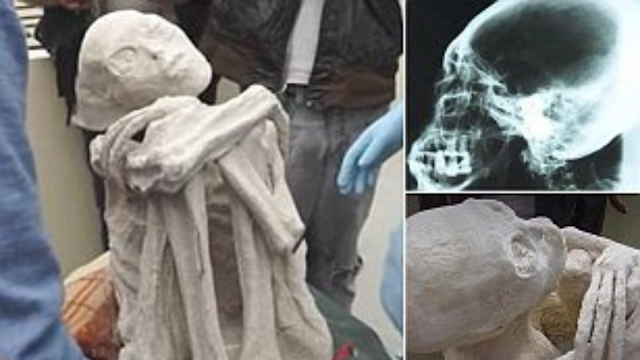 Credit: Express Online/UFO Sightings Footage/UFO News/Canva.
Peru is a beautiful country and it's history stretches right back till before the world had four corners. It's also got skeletons in it's closet and sometimes people say that or refer to it because of old stories or shameful events that took place. But in the case of Peru, it really does have skeletons in it's proverbial closet, literally. Say hello to the 3 fingered Alien entity that was recovered from.

Dr Konstantin Korotkov claims he has done DNA tests to prove they are not human.
Dr Konstantin Korotkov, a professor of Computer Science and Biophysics at Saint-Petersburg Federal University believes the mummies are 'aliens'.
Dr Korotkov is no stranger to controversy. He was widely criticised in 2008 when he claimed to have created a camera that could photograph the human soul.

Here's the video:
Please let me know what you think about this amazing discovery of an ancient 3 fingered Alien entity mummified. I'd appreciate it if you could share this post with someone who you think would appreciate it, cheers.
Credit: Gaia.com/Daily Mail Online/Express Online/UFO Sightings Footage/UFO News/Canva.