Crashed Craft on The Moon And A UFOs Coming Out of Bases At 4:20

NASA has gathered so much evidence that Aliens are on the Moon that it's hard to know where to begin. NASA went to the Moon to recover technology.

The Moon is hiding many secrets and some are literally right on the surface and NASA can't do anything about it.

I literally had a thousand and one different UFO incidents filmed or photographed in, on and around the Moon - to choose from to make this post. Seriously, that's how many times people are finding different, stunning and shocking thing's that are strange about our Moon. And that's only the good ones, the tip of the UFO iceberg "amazing Moon anomalies". 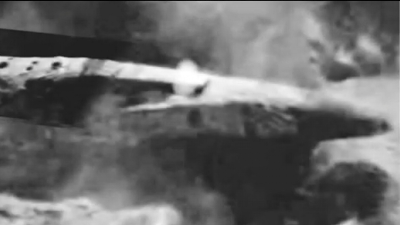 Credit: NASA/Megganewschannel YouTube Channel/Sightings Footage/UFO News/Canva.
At 4 minutes and 20 seconds we see 2 domes on the Moon, look very carefully because something shoots out from between them, that's why the person putting this video together has included this amateur video footage. It's exactly what NASA keeps an eye on, most satellites orbiting the Moon, they're there to keep an eye on the UFOs. NASA mapped the Moon a long, long time ago. Yet they keep using the same old story "to map the Moon" to send new satellites.
Okay  here's a supposed tank on the Moon, a part of an army that the Sun wrote about here's the whacky link. In fact Secureteam10 did a YouTube video about this very tank on the Moon which part of an army... Hmm, that's a new one on me but never say never I suppose. Maybe I'm so used to there only been aerial vehicles on the Moon, lol. I'm starting to hear tomatoes versus tomatas. Lol. 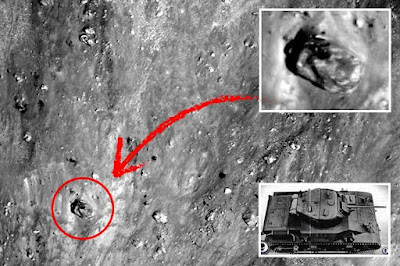 Credit: The Sun.
It's the Moon for Heaven's sake, it's in no way going to blooming change according to your own assessment, but we know through amateur footage with new digital cameras rated to see up close on Earth, hold on. The Moons supposed to be 384,400 km erm...
Hold the hell up, back up a minute. How the hell can we see the Moon up close with a digital camera RATED to see up close on Earth and at a push in triple digits? Unless there's something obvious that I'm missing?
Anyway, these photo's are amazing nonetheless.
They're in plain sight as well. You see, Extraterrestrial entities don't have our sensitivity in mind when making decisions for a new base! The last thing on ETs mind when they're thinking about changing scenery from one Moon cave to the next is "not" what Mrs Smith down Dukesbury Avenue might think if she see's it with a high powered camera!
Here's another great video I've come across aboutvthe Cigar shaped UFO sticking out off the Moon  It's by Megganewschannel YouTube channel:
Credit: Megganewschannel YouTube.
Check out this one out though with the NASA serial number; AS20-1020. The UFO is litterally half on the surface of the Moon and the other half is off the Lunar surface and pointing upwards towards Earth in an accusing point that would say "you did it". Obviously we didn't because it's an ancient UFO on the surface. This one we can see it as clear as day in this official NASA photo. I'm really not sure as to why this isn't the go to piece of irrefutable evidence of Alien's that would settle the Extraterrestrial entities exist issue once and for all, I genuinely cannot figure that out. 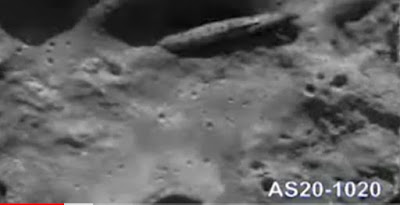 Credit: NASA.
These photo's that I'm showing here aren't nothing new, unless you've never seen such detailed photos before then they're new. But, let's take it account that we've just had UFO disclosure, we should take another closer look at the Lunar surface evidence through new eye's so-to-speak. I like to do this because it's comparing my old hope's and thought's to recent declassified facts (that UFOs are real). 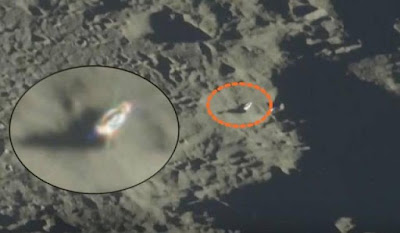 Credit: NASA.
So, looking at these structures on the Moon with new eyes, and knowing that there's a higher probability than before that these are Alien structures is somewhat vindicating but in a "why did it take so long" kind of way.

Credit: Google Search.
These structures on the Moon are what NASA has been aiming for since they had irrefutable evidence that Aliens are working on the Moon and that there's no end of technology to plunder. 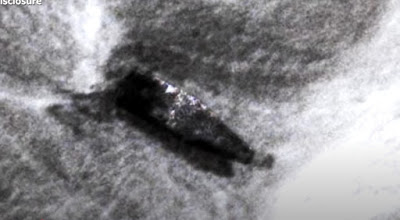 Credit: NASA.
Here's the extraordinary YouTube video:
If you've got some footage that you took yourself that shows objects on the Moon or coming from the Moon or visiting the Moon, please send it to me. Go through WhatsApp or Facebook page UFO Sightings Footage, cheers.
Credit: NASA/Megganewschannel YouTube Channel/Sightings Footage/UFO News/Canva.