An eye witness called Mike took his dog for a walk and he inadvertently caught a great UFO Orb on his phone. The UFO was over Lake Ontario in Canada.

Here's the scenario, a guy takes a normal nature type photograph of the sky with a bird in the foreground, and while he's walking his dog, he goes home none the more wiser for doing so. But...

He's totally unaware that he's possibly just photographed one of the most controversial Black UFO Spheres in Canada - definitely of 2016 over Lake Ontario. An airplane had to take emergency evasive action just a few month's later after he shot this photo! They had to get out of the way of what a Government spokesperson has described as a "drone". But inadvertently, they've just admitted that something was there, right. I'm not sure that the Government spokeswoman knew that someone had possibly caught it on camera? We know that it's a UFO sphere because "Mike" that's his YouTube channel name actually photographed it not long before this airplane incident happened.
Related post
Very Clear Video Of UFO Orbs Moving Together Miami In Florida
The emergency evasive maneuver was so sudden as you'd expect it to be, but it caught 2 cabin crew members totally unaware and it actually sends 2 of the crew attendants to the hospital, ouch!
All because the pilot in a de Havilland Dash 8-400 airplane has to take emergency evasive action at 9.000 feet just to and get the heck out of the way of (what we now know is a UFO) what the pilot at the time thought was a balloon and then the Government spokeswoman said was a drone?
It's a silver and black (probably metallic) sphere UFO that we now know about due to this photograph which had been taken a few months before the plane incident. Okay, it's not on the same day but if the cap fit's, wear it as they say. Personally I believe that it's been taken at the right time and at the right place.
Here's a screenshot from the video that Mike made: 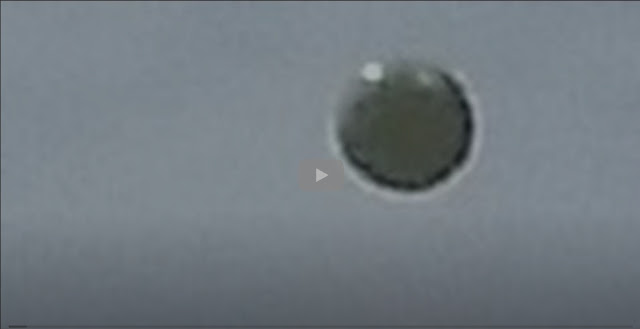 The YouTube video description has 2 link's in it, one of the link's takes you to CBC page which is a Canadian News website (all links are at the bottom of this post) which has a post possibly about this very UFO Orb and the incident that it caused.
It's a revealing behind the scenes (kinda) look into what impact that maybe this UFO encounter had - but on other people and what the Canadian Government's response was which they actually was quoted as saying it's "serious". Here's what the spokeswoman said about it in brief:

Kate Young, the parliamentary secretary to the minister of transport, said the government is aware of the incident, which she called serious.

And yes, after reading the CBC News website post and what Mike (YouTube channel) had to say about this UFO Orb, it's definitely interesting and it's worth looking into even more because there's a lot of these Orbs going way back.
Here's a quote from the CBC News website:

None of the 54 passengers on board were injured during the incident, now being investigated by the Transportation Safety Board (TSB).
The TSB said the "risk of mid-air collision" happened before 7:30 a.m. ET and involved flight POE204 travelling from Ottawa to Toronto's Billy Bishop Airport.
Porter said the event happened over Lake Ontario near Pickering, Ont. — about 55 kilometres east of Toronto — as the de Havilland Dash 8-400 plane was flying at a height of about 9,000 feet. The statement said pilots noticed an object in the distance, which they originally thought was a balloon. 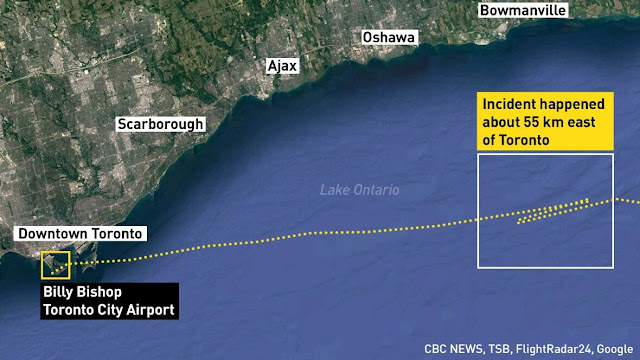 Flight data from FlightRadar24 shows the Porter flight zig-zag on its approach to Toronto. (Credit: CBC)
This is a great UFO capture, it usually only happens to other people just like this one did, stuff like seeing an epic UFO ball - it never happens to me, boo hoo. Lol. To be totally honest with you I'm just so glad that someone is catching these stunning, metallic sphere UFOs and what's more important is that they are reporting these UFOs! Something is going on because of the huge spike in UFO spheres or UFO Orbs as they're becoming known as. I've tried to chase down the original start of this spike in Orbs appearing which I think I achieved? I looked back at NASA's ISS (International Space Station) reported UFOs coming into sight and omg!
I believe I hit pay dirt because I followed my instincts with only a hope and low and behold, on one occasion I found an ISS Live feed video showing what I believe to be the largest cluster of UFO Orbs all of which are coming to Earth and not going away from the Earth which Icounted as 6 in total menacingly floating past the ISSvery slowly. Here's a link to that post.
It just so happened that it happened just before the world was flooded with UFO Orb sighting's which is coincidental but not definite proof...

Krepski says the TSB was unable to positively identify the object. "What we do know," Krepski says, "is that the description and size of the object does not match any known commercial or consumer unmanned aerial vehicle, or UAV. The occurrence location, which is 10 miles from the shore at 8,300 feet is beyond the range capabilities of most commercial and consumer level UAVs."

None the less, it's yet another jigsaw piece of proof in the Ufology rucksack as far as I'm concerned. This rucksack by the way is really heavy with jigsaw pieces! I've literally lost count because I only got to 3 before I realised it's futile, probably can't be done and as it's all still speculation, we'll it's to open ended therefore I'll just keep mentioning them as and when I come across these coincidences and pieces of evidence. Titbits I like to call them for the obvious reason 😏
Here's the extraordinary video made by Mike, the eye witness:
Here's the full YouTube video description:
Accidental Black Sphere UFO pictures. Or strange object in the sky if you prefer. Click the gear icon and watch in HD. This is not a really cool video of a Black Sphere UFO, it's me talking for 15 minutes and zooming in on a couple of pictures that it accidentally ended up in. Watch it when you have nothing better to do.
The money shot section starts at 5:30. Or watch the whole thing and be blown away. This morning I was at the beach with my neighbor's dog and snapped a bunch of pics with my phone. The pics are from a 16MB smartphone so they are much more clear than the video can show. When I got back home and looked at them on the computer, I saw a weird thing off in the distance in a couple of shots. What looked like a black sphere. It was there in one pic, then it was gone in the next, then it was back a few minutes later, then it was gone. Windless day, Lake Ontario smooth like glass.
I am NOT saying it's a ship from outer space, I AM saying I've never seen anything like this and have no idea what i'm looking at. I will leave the comments open on this so you can tell me what you think you see. Spread this around please, let's see what people think it is. PS I own the copyright to all the pics and this vid. PPS wow, i just searched for 'black sphere UFO' on youtube and there's a ton of videos of them. Very cool... Someone is working on something cool they don't want us to know about, I think that's a lot more likely than alien spaceships who somehow can't avoid photobombing our selfies.
******I"m adding this many months later. In response to the comments asking if it's the ball i'm throwing for the dog, great idea, but it's not. Once maybe, not twice. Besides, The ball is bright orange, not black. If you look at the video at 3:44, you will see the ball hit the water, creating ripples. This is 40 seconds after I shot the first pic of the sphere. The distance the kayak covers confirms that. If the dog was going in for the second time in the shot where the ball hits the water at 3:44, the water wouldn't have been glass smooth in that second shot, it would have still been disturbed by his first trek in. Also, if you look at how close to the shore i'm throwing the ball for him, you'll realize how difficult it would be to get the ball that high... Also, here's the kicker. A few months after i shot this, a Porter plane on the same path in towards the airport, Billy Bishop airport, almost crashed into something that sounds like this object. They had to zig zag and dive, injuring people on the plane. At first the pilots thought it was a balloon but when they got closer, they had to pull this dangerous move to avoid hitting it.
This article gives a good overview of what they say happened, but other articles give more details about the description of the object, which the pilots say was about 3m or 9feet in diameter, and was flying at an altitude of 8300 feet, 10 miles from shore over Lake Ontario. They even have a map of the flight path of the plane, and that's pretty much right where i saw it. Not 55km from the airport, more like 5, but it looked to me like it was very close to the flight path a lot of the planes coming into that airport take.
https://www.cbc.ca/news/canada/toronto
And here's an article about how they dropped the investigation after a few days...the takeaway is: "What we do know, is that the description and size of the object does not match any known commercial or consumer unmanned aerial vehicle, or UAV. The occurrence location, which is 10 miles from the shore at 8,300 feet is beyond the range capabilities of most commercial and consumer level UAVs."
https://www.iheartradio.ca/580-cfra/news/tsb-closes-investigation-into-near-collision-involving-porter-flight-and-ufo
Please share your thought's and opinions also any ideas that you might have about this extraordinary UFO video. Also if you could share this post I'd appreciate it, cheers.
Credit: Iheartradio/Mike YouTube video/CBC News/UFO Sightings Footage/UFO News/Canva.