NASA clearly switched the ISS live feed when 6 UFOs was spotted menacingly flying so close to the ISS and passed it on Live feed. This is real UFOs.

Oh NASA, NASA, NASA what is the deal with your engineers switching over the live feed to stop the UFO fleet, been seen flying past the ISS?

I literally have no answers as for your behaviour because I thought that your goal in space was to look for Alien life and share it with the public, not cover the whole thing up... 6 UFOs (that's how many I counted) are Stalking the ISS and all you can do is switch to another camera? What's your blooming deal NASA your supposed to be actively seeking life, not being scared to even put them on TV. Somebody is pulling that string and I don't like it. 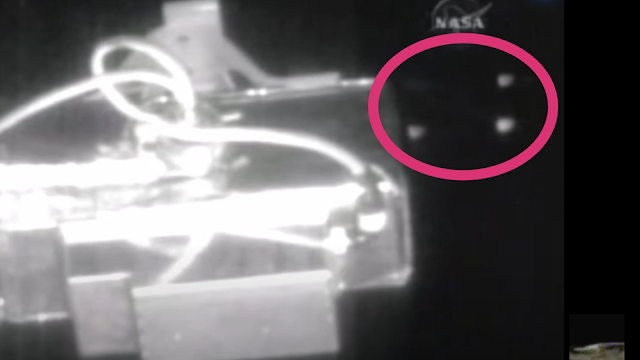 It seems like one big cruel joke that the Extraterrestrials come to you with their hands held out (albeit a bit menacingly) only for you to look the other way deliberately! Then you go one step further by turning off that CCTV at the exact moment a once in a lifetime event is happening.

Then you go turning the screen to see cap com. It looks like a classic case of you dancing to the tune of a "nefarious puppet master" that doesn't want what's unfolding on screen to continue in the public eye.

In fact it's more than a cover up, your denying humanity what's rightfully theirs, ours, mine! Your denying us the knowledge that we're not alone in the universe and I can't forgive you for it and neither should humanity.

NASA has been accused of covering up an alien sighting after a video surfaced showing six UFOs passing the International Space Station live-stream seconds before the feed is cut and replaced with images from a camera showing the inside of a briefing room.

It's not just a one off thing neither as well, as you've turned off the ISS live feed on multiple, multiple occasions when a visible craft has just come into the screen.

I'd like to say it's just a case of bad timing but if it wasn't for the many, many visible UFO anomalies entering the screen on NASA’s ISS live feed on each and every unfortunate incident I'd just think it's a normal procedure, but it's anything but normal.

Please explain why then, when everytime a UFO is on the screen moving away or coming towards your space station or slowly turning away from the ISS, or speeding off and executing manoeuvres that no known objects can normally withstand or actually do - do you deliberately turn off the screen and it goes blue? A message is displayed saying your experiencing technical difficulties?

I do not, I never will and I shall never, ever believe in coincidences! There's no such thing in my world - unless you're superstitious because it's on the same lines as that. Just remember, everything is on purpose one way or another. If a so-called coincidence happens, you can guarantee that somewhere down the line an action is responsible directly or indirectly which makes it no coincidence.

Here's the full Streetcap1 YouTube video which is awesome:

Please can you share your thoughts on this excellent opportunity to meet and greet Extraterrestrials and possibly join the interplanetary group of species capable of planet hopping! Also if you can share this post I'd appreciate it, cheers.