The fact that there's many UFOs being escorted by military Jets might mean that at least one is real. The others might be a ruse to lend confusion.

I can't even begin to tell you what this means if this is real (the UFO video at the bottom of this page) which I'm sure we'll all get to the bottom of.

But firstly I'm going to be making a quick distinction between knowing what a "made for TV UFO animation is" and knowing what a possible real UFO sighting looks like.

The image just below shows the UFO that was made for TV, actually it was a UFO reenactment created by looknowtv specifically to show in the TV documentary and the audience. It's a representation of what the eye witnesses saw. It was a genuine real attempt at giving the TV viewer a glimpse into the minds eye of the UFO witness. In fact, it totally backfired because someone recorded the TV show and said it was a real UFO sighting. What happened next was horrible. Below is the CGI animation of a UFO being escorted by military Jets. I took a snap shot of it to show you. 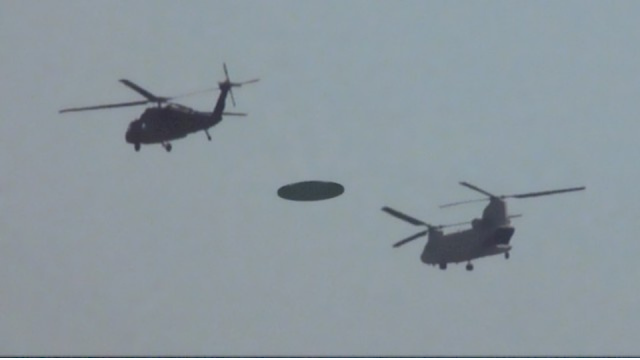 The guy who created the CGI animation was slandered, but because he has it on his own YouTube channel. It clearly states on the video that it's for entertainment purposes but instead he was saveged and you know why, it was all because people doing it was to lazy to read the description! How nasty is that, blatantly attacking someone because they either got behind it, believed it was real but then they found out that it's not real, so instead of being educated, they go after the guy who "clearly stated he's an animation expert" and recreates stuff for TV.

But, anyways I want to show you what the difference is between an animation UFO video and a possible real UFO sighting caught on camera that was flying past an actual eye witness? Just below is the image that shows a possible real UFO actually being escorted by Air Force Jets. 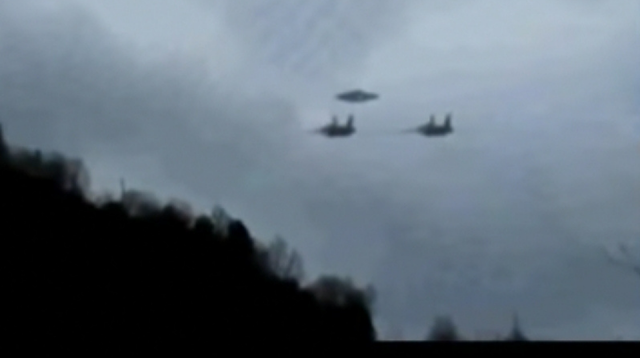 While I prepare that why don't you make a coffee and I'll be right back.

I hope we're looking at the UFO recovery branch of the Air Force and even if it's man made, that is such an impressive thing to see! I have no doubt in my mind that Aliens are behind the UAP videos that happened with the Navy pilots. I say this because they are saying that they found out no country has that type of technology. They would not release it if it was a countries technology because they would never show their hand like that! It's a genuine UFO video of unknown origin...

Here's the full video of the possible real UFO sighting:

That's why I think it's wise to keep an open mind and treat every UFO sighting with caution and with an open mind because the facts are that UFOs are real, it's just now we don't have a catalogue so we must treat them all as the real deal until proved otherwise.

I can think of 3 different videos with military aircraft escorting UFOs either back to or away from their bases... Check out the link just above and there's 3 UFOs being escorted by Air Force Jets, one or none might be the real deal...

That's 3 UFO videos with a probability that they was recovered or man made UFOs but also possibly fake and pieces of rubbish intended to mingle with the other millions of UFOs. Look there's no crime in the Air Force having round disk shaped aircraft you know. It's only because of TV that people have a distinct pre judged shape to UFOs anyways!

Where do you think you got that knowledge about what an Alien looks like, I mean it's not like you've seen one but yet you already have a pre judged look. So do I, I swear that I used to believe that Aliens we're tall, grey, black tear drop shaped eyes with a huge round head and a tiny mouth with 2 tiny holes for a nose. You and me, we all got it from the damn TV.

So, when I say that this UFO video (above) possibly looks like a genuine UFO video, I'm saying it because it's actually true. There is a slight chance that what we think we know a UFO looks like, might just be wrong or right? The more that we can rule out, the better. So the guy stating that the UFO video he created was nothing but CGI - is awesome because he's deliberately and actively helping Ufology out by giving us the right information instead of letting it become part of the mythology and mystery.

In this day and age, 2021 it's really not a case of the UFO phenomenon either being real or not because we all know that the military has engaged real UFOs. So yeah, I'm always, always going to air on the side of caution when it comes to UFOs because we now know that they are a scientific fact!