Sphere UFO definitely caught the eye of a member of the public and it was filmed using a tripod after having the mindset to grab a tripod and camera.

There's a saying that "history repeats itself" and while it's only three words, it definitely has a large and commanding statement.

The San Diego Sphere UFO sighting looks like the Sputnik satellite made by the Russians and sent into space for the first time in human history!

The similarities of the Sputnik satellite and the San Diego Sphere are to striking to ignore. Let's not forget about the ancient painting of the sphere with antennas.

Alien secretly recorded inside a UFO

Below is a fantastic Sphere but it's not right! This thing shouldn't be in the sky at all. There's no visible propulsion. 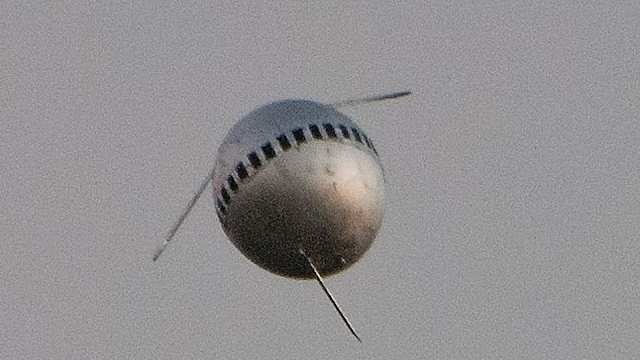 Coming home about 18:55 when I pulled into my driveway. Above and beyond my neighbors home I noticed a bright orb hovering. It reflected the sunset orange, and that is why I noticed it; besides it was a completely clear blue sky. I thought it could be a balloon or some sort of odd looking helicopter, but it didn’t have any rotors.

It appeared to have rods or antenna coming out of it. I went to my backyard to get a better view. I appeared to be less than a mile away over residences. I got my camera about 5 min later and set up my tripod.

I took a few photos. Then got my video camera and began to shoot video too for about 20 min. Over the approx 45 mins that I watched it, there was some wavering like it was being affected by air movement. At times it would descend behind a large tree, then reappear slowly as it came out from behind the tree.

The object remained relatively stable then started to slowly drift away to the SW until I couldn’t see it anymore because it was too dark. I was intrigued by it. My photos showed that it indeed had 3 rods coming from it.

What a great testimonial from an Eagle eyed witness who had the mindset to grab a camera with a tripod film this amazing UFO.

That's very indepth and amazing that the UFO anomaly stayed there for a long time, enough time for them to set up a tripod and film it for approximately 45 minutes.

Haven't we seen this before in artwork? I'm pretty certain that the Russians designed and built a satellite that looked exactly like the one we see here?

I'm wondering if this simple sphere (with antenna sticking out of it) is quite common? If you have seen anything else like this before and if you have please leave a message on this post, cheers.