This Flying Saucer is roughly around 5 stories high so it's an absolute monster and it's gonna take some serious amount of energy just to move it.

Huge, that's the only word to describe this Flying Saucer in exact detail, it's the all encompassing word that fit's this to the T.

The date is the 28th of August 1992 and this Flying Saucer being moved is really happening in the United States.

As you can see by the spectacular video footage there was a super massive Flying Saucer being filmed by a guy as the people milled around it and by the looks of it they we're all in control of it. The people definitely looked in control of it even while it was moving (suspiciously like they've done it before). 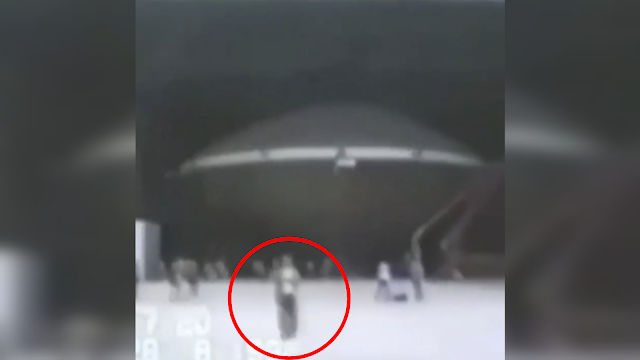 Credit: Committee on Transportation and Infrastructure/US Air Force Area 51/UFO Sightings Footage YouTube Video/UFO News/Canva.
If the videoing of this object was for insurance purposes then that's a definite Hollywood film prop. But I'm pretty sure, actually I'm convinced that it's not a Hollywood film prop because of it's size. Also we'd have seen it in a movie from the 90's or early 2000's? I don't know of any movie that has a nearly 5 story high Flying Saucer in it, do you? That's not to say it isn't a movie prop - but from what I know it's just way to big? The videos date on the screen says 28-08-1992 and it was apparently filmed at Area 51. We also see it being moved from what looks like one hangar to another possible hangar via a connecting road. 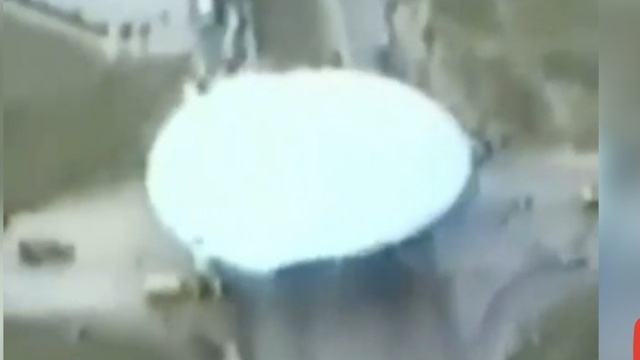 Credit: UFO Sightings Footage YouTube Video/UFO News/Canva.
But I have noticed that there's no propellers, no engines, no nothing to move itself and there's no evidence of a crash and retrieval scenario going on? I don't see any light's on it, and there's no exhaust protruding from it anywhere that I can see and as for an Earth like traditional propulsion system, I honestly don't think it would be able to do anything anyways?
What is propelling this very large Alien looking spaceship?
Also to boot, there's no antenna so what kind of technology is going to be inside of it? Unless the aerial vehicle in this video had all of it's inner technology actually built up inside it as the whole thing was being created then I  can't understand how anyone could get anything inside?
Related post
Mothership's Parked Insde Saturn's Rings Photos Taken By Voyager
Unless we're looking at a recently recovered Flying Saucer why would humans want to create something like this? The lorries underneath it are rated for I think 50 tonnes but don't quote me on it? 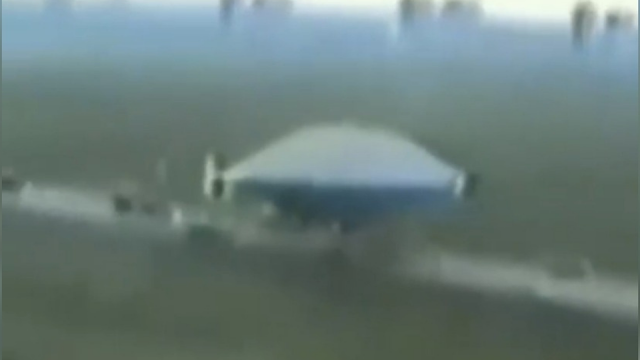 Current truck size and weight standards are a blend of Federal and State regulations and laws. Federal law controls maximum gross vehicle weights and axle loads on the Interstate System. Federal limits are 80,000 pounds gross vehicle weight, 20,000 pounds on a single axle, and 34,000 pounds on a tandem axle group. There are also Federal standards for length and width on the National Network (NN). The NN comprises the Interstate and certain roadways designated by the States. There are no Federal vehicle height limits.

If this happened 30 years ago nearly, I wonder what has happened to this Flying Saucer? I'm curious to find out where this is now? My thinking is that if it's not broken then why fix it? Advanced aerodynamic flying vehicles like this one must be as vital now as it was way back when they filmed it in 1992.
Related post
The Clearest Silver Metallic Flying Saucer Type "Disk" Over London
And after looking at the video for the 50th time, there's only one large lorry underneath it carrying it's weight and moving it. There is other lorries underneath it but I don't think they're doing anything to be quite honest with you? It's strange that, because why would lorries be flanking the main lorry in the middle of the unknown object but be doing nothing? Also, why is there so many people hanging around?Unless, I think we need to apply some common sense here because they must be doing something important and there for a real reason and maybe we just can't see it as it's a bit to dark to see underneath it.

The people in the hangar could all be waiting to get inside of the Flying Saucer and also waiting for it to be secured in place so it will not move?

That makes sense to me, what about you? Is this the Air Force or is it Area 51 scientists and engineers on this?  The people around this Flying Saucer must be affiliated with some agency or other? Unless it's a part of the shadow Government or it could be a part of the top secret military world and it could be a part of their projects on recovering crashed UFOs? UFOs that have landed on Earth and cannot take off again, or a simple broken down Extraterrestrial vehicle...
There's many word's to describe this flying saucer behemoth just because of it's sheer size and after "huge and behemoth" the words actually seem to fail miserably because humongous though it is  you start to see the ant like people next to it, the HGV lorries underneath it which are somehow moving it and carrying all that weight looks like toy vehicle's. I couldn't help but be mesmerised by the way these people are manoeuvring this like they've done it before or it's as if they know it intimately.
In otherword's, I think they know exactly how to move it and what will get the job done because they blooming made it! Seriously, would that surprise you to learn that they created it inside this overwhelming "size wise", hangar? It reminded me of this Flying Saucer found on Google Earth which I wrote about a long time ago. Check it out just below and I've linked to it below the image... 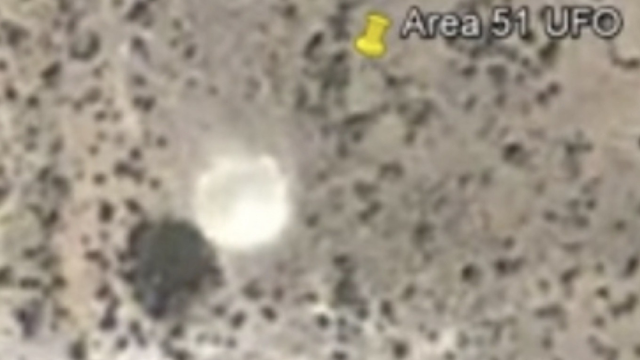 Credit: Google Earth/UFO Sightings Footage/UFO News/Canva.
Link to this above post:
2 UFOs Around Area 51 on Google Earth | People Still Don't Think We've Been Visited
Check out this UFO image below, I wrote a post about it because it was found on Google Earth. One of the two UFOs looks just like this one in the hangar.
It was filmed in 1992 and I've pointed it out in the video that there's another guy filming this planned move because we see him with a early 90's camcorder which used to sit on the shoulder with the person filming it looking through an eyepiece. I'm explaining the camcorder because there's people reading this who'll say "what the hells a camcorder" and why has he got that thing on his shoulder like a Bazooka?
Believe it or not, 1992 was 29 years ago. That's 3 decades in the making and camcorders have gone from a bulky Nike shoebox sized video recorder to a pin head in your phone.
Here's the full video which I've uploaded to my YouTube channel:
Please share your thought's and opinions also any ideas that you might have about this amazing Flying Saucer that was filmed in August of 1992 which 29 years, 2 months and 15 days ago. I've done image searches from it, which looks into the image content and I've tried a lot researching the early 90's Flying Saucer sighting's etc all to no avail. And the information on this specific Flying Saucer in the hangar is also extremely hard to come by. I am convinced that it's because of it's age, it's just shy of 30 years so we've got to continue looking into this and update this post as and when the information becomes available.
Credit: Committee on Transportation and Infrastructure/US Air Force Area 51/UFO Sightings Footage YouTube Video/UFO News/Canva.