A silver metallic UFO was filmed by an eye witness that absolutely caught it at its best. We see the flying Disk fly behind a mountain it looks good.

If that's not a real UFO then I honestly don't know what is and at one point this flat Disk comes past the eye witness and it's so close he or she could literally throw a stone at it.

I mean just look at it close up, I've got no qualms in saying that it's definitely real. It's as good as it's ever gonna get aside from it landing, an Alien getting out and waving a flag. There's absolutely no information with this UFO encounter that I can find anywhere online. But don't let that put you off from it's authenticity as most fakes actually have a story to back up the UFO hoax, just to make it sound more real. 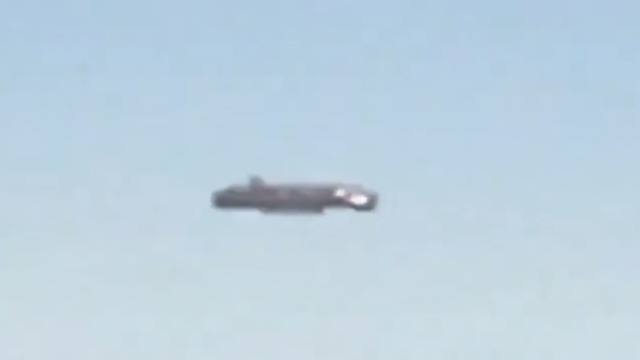 If you think Ufology gets any better than this, please let us know because from where I'm looking from, it's as good as it's ever gonna get. It's flying through our atmosphere with ease, it's not using any traditional Earth fuel or traditional propulsion systems used by any Earth traditional aerial vehicles or engines and yet it flies effortlessly.
In fact I'd go as far as to say that it's defying gravity for starters!
I suppose that's because we're looking at an altogether different mode of transportation and altogether different type of technology which we simple and mere humans are not used to seeing. It's the only answer as to what we're seeing, right?
Related post
I Can Prove Alien's Are On Mars | Check This Out
Here's a spectacular close up of the silver metallic UFO: 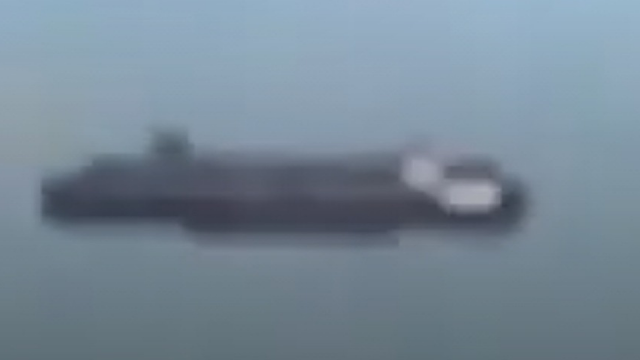 Credit: Alien Invasion YouTube Channel/UFO Sightings Footage/UFO News/Canva.
I'd totally agree that this isn't a UFO at all and it would likely be a drone. But we know for a fact that we humans do not possess publicly or otherwise any type of technology that could pull this off, not even in a recreation or a reenactment. Like I said there's no sound, no propulsion system, no exhaust, no antenna, no propeller, no jet engine, no light's, no magnets, no strings, no mistaking this is a definite Flying Saucer type of flat Disk.

It's flying through our atmosphere with ease, it's not using any traditional Earth fuel or traditional propulsion systems used by any Earth traditional aerial vehicles or engines and yet it flies effortlessly.

And it's simply stunning. I enjoy trying to figure out what is driving these UFOs. I also enjoy trying to figure out what is propelling them forward and sometimes sideways, or backwards. The less I can figure out the better chances it can be a UFO. I'll admit though that anti-matter reactors and anti-gravity engines etc which all come under reverse engineering UFOs, it's really not my strongest point. It doesn't need to be because the videos and photographs all speak for themselves. Not so much the UFO photo's but definitely the UFO videos speak for themselves. 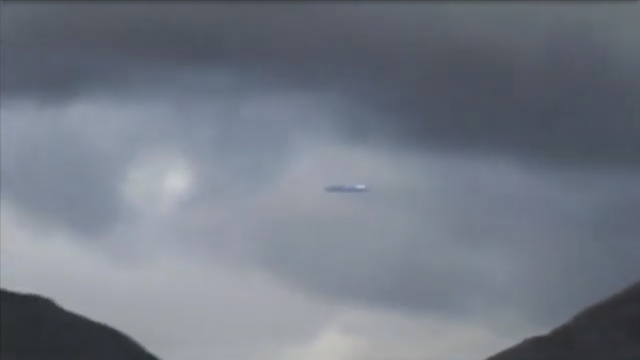 Credit: Alien Invasion YouTube Channel/UFO Sightings Footage/UFO News/Canva.
As far as theceye witness been so close they could throw a stone at it, I really don't recommend anyone to start throwing any stones at any UFOs - just in case you miss and hit something else or someone. Also if you are in the immediate vicinity of a real UFO, you could end up on the end of a huge Alien's boot! look at this Silver Disk in the video and you'll see the clear details on the side of it. When it start's to disappear from view and it's starting to go behind the mountain, you can see it's a seemless disappear behind the mountain and everything looks like it should do.

This is where we'd probably see the tell-tale signs of any skulduggery or spoofing of the UFO on it's edges and on the outlines where the hoaxers haven't quite got the sharpest skills because most hoaxers of UFO videos (if not all) tend to be absolutely free of any and all brain cells and usually listen to K-Pop wearing their mum's eyeliner. 🙄 Grrr I don't, like, fakers!

No! I'm not even gonna go down "that" road today, I do entertain it sometimes though when I'm feeling a bit down but I refuse to get drawn into making fun of UFO hoaxers "today". If you know me,  you'll know that these tool's are people that bug the s**t out of me! I don't hate them, I just detest their silly, stupid behaviour of faking a UFO sighting and then laughing at people who believe them.
Related post
Apollo 16 Astronauts Photographed An Alien Spaceship In Space In Official NASA Photo's
So, back to this Silver Metallic Flying Saucer type Disk or flat and "roundish frisbee looking UFO". It's hardly got any details on the outside except for smooth looking and very defined sides which are rounded off and the back of it and the UFO almost has a wheel arch look to it's lower right bottom? It's as if this looks like a silver shell of a car but with no wheels or windows? Go ahead and have a quick look, it really does.
Related post
The Police And Air Force Called It A UFO That Had Exploded Over Vietnam
What is propelling it along in the sky in the first place, there's no sound, it's got the Sun's reflection in the right places coming from only one direction and the shadows look legitimately correct - so it looks pretty genuine to me. Also, it's not got a white halo around it's circumference which is another tell-tale sign of a copy and paste plus the use of a snipping tool. This is the leftovers from manually cutting around a model UFO on a table top. It's then put into a video that has innocently been filmed and this shows a mountain? The cutting would leave bit's behind on it's edges. Again, these are all great signs and it could possibly point to this been a bona-fide real UFO sighting?
When this UFO finally emerges on the other side of the mountain it's obviously a wee bit smaller but only this time it's going straight into the clouds which must be hard to fake because the UFO has to have a believable cloud pass over it's moving surface. Both the cloud and the UFO is moving so this must be a hard thing to fake, I'd imagine?
We get to see it going in and out of the really moody looking clouds, they're about as dark grey as they can get before these clouds start lashing it down with rain. The more I keep looking back at segments of the video for this UFO, the more I'm really liking it.
Here's the YouTube video by UFO News:
Please share your thought's and opinions also any ideas that you might have about this amazing UFO sighting filmed right next to a mountain and over a populated urban area. I'd also appreciate it if you could share this post with someone who you think would appreciate it, cheers.
Credit: Alien Invasion YouTube Channel/UFO Sightings Footage/UFO News/Canva.