The Apollo 17 Astronauts photographed an Alien spacecraft out of the craft window they're in and it's absolutely stunning. Is this an Alien cover up.

Have you ever seen this partially transparent spaceship photo before, if not then your in the same boat as me, so don't worry.

Seriously, I've never seen such a fantastic and as detailed Apollo 16 photo of an apparent half transparent Alien craft in space before and to boot, I've often thought we've had as much controversial stories as we can handle. We've obviously not had all the controversy from the Apollo mission's then, because this little rascal lol comes along to challenge that thought train!

I'm seriously asking the question now, is this a blatant Alien cover up because this craft is right next to the Apollo spacecraft.

UFO Sightings Hotspot I believe reported that this photo is from the Apollo 17 mission but the photo is part of a sequence and series which was actually taken aboard the Apollo 16 mission. That's what it says on the write up on Archive.org which is where the photo is. Also at 0:02 seconds into the video below the photo is definitely there and that YouTube video by Dutchsteammachine has all the photos from that series in a video slideshow. 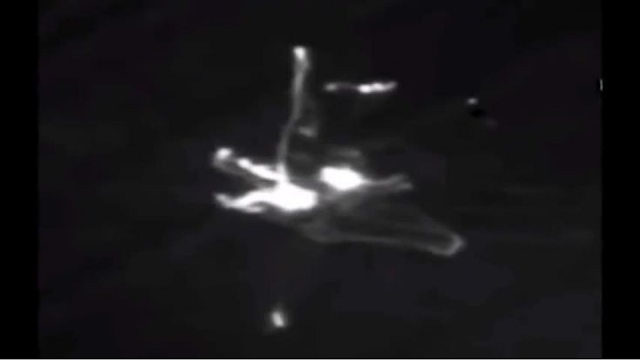 Credit: US Archive dot org Apollo 16 Photo's/NASA Apollo 17/UFO Sightings Footage/UFO News/Canva/Dutchsteammachine/Apollo 16 AS16-123 UVC Far Ultraviolet Camera/Spectrograph S201.
Related post
I'm Going on Record And Stating That This is The Best Double UFO Sighting Ever
I mean, it's as detailed as any close up of a UFO that I've ever seen before and because it's the Apollo crew taking it, the authentication factor goes up a notch and to be honest I'd expect nothing less, right? 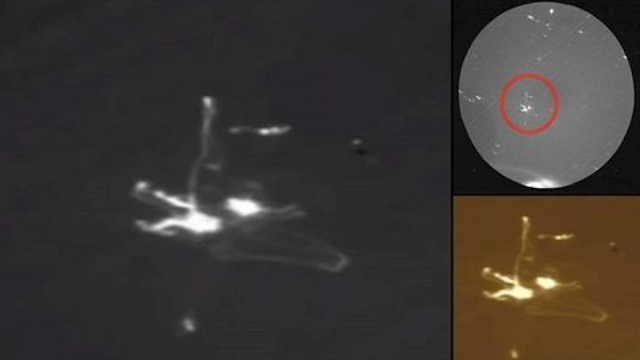 Credit: NASA/UFO Sighting's Footage/UFO News/Canva.
In this 3 photograph collage (above) we can see a single NASA photo showing what is believed to be an Alien spacecraft, from 3 differing ways. Don't forget that this is in "the official Apollo mission photo's."
Wikipedia Apollo 16 Moon Mission quote:

Apollo 16 (April 16 – 27, 1972) was the tenth crewed mission in the United States Apollo space program, administered by NASA, and the fifth and next-to-last to land on the Moon.

Here's the actual full YouTube video which I have created, narrated and added the NASA photo's to it. I've recorded my thought's, please enjoy:
Credit: UFO News YouTube video.
The cameras were top notch back then in 1972, the astronauts were all accomplished photographer's in their own rights (they had to be for the cataloguing of their travels) so I'd expect nothing less. But, it's the controversial content included in this freaky photo which is gonna turn out to be a top secret Alien craft probably or more than likely. Here's a quick quote from the website UFO Sighting Hotspot:
Quote:

Apollo 17 was the final mission of NASA's Apollo program. Launched at 12:33 a.m. Eastern Standard Time (EST) on December 7, 1972, with a crew made up of Commander Eugene Cernan, Command Module Pilot Ronald Evans, and Lunar Module Pilot Harrison Schmitt.
After viewing many images Michael from The Kepler Telescope Channel found an image showing what appears to be a partially transparent alien spacecraft next to the Apollo spacecraft.
Michael said: I don't normally get interested in these objects, normally they turn out to be ice particles or thermal blankets or something like that, but this NASA release from the 1972 Apollo 17 mission seems to show something otherworldly.

So often we come across such amazing UFO photo's like these and yet every single time we come away from reading what we can about them only to have more questions than before we looked at the UFOs. That's because NASA censored all communications and nobody will go on record to put anything straight about UFOs in their own evidence. It's about as strange as this very UFO in this very photo.
You'd expect that someone would want to get to the bottom of what it can be, what it is and what other evidence can back it up. It might mean though that the astronauts themselves are on double mission's, the public mission and the secret mission's. If they had this UFO or Alien spacecraft in their sights long enough then they was probably in contact with it? We could even go one further and speculate that it was actually supposed to happen. This meeting was alway's planned and that's why the UFO is in the center of the photo...
Here's another theory, the Apollo mission's were alway's supposed to establish contact with Extraterrestrial entities from day one, because lets have it right, they've been plagued with Alien craft's in photo's, UFO sighting's through windows etc, and iterally I've lost count of the many UFO sighting's from the start to the end of the Apollo mission.
Here's the Dutchsteammachine YouTube video:
Please share your thought's and opinions also any ideas that you might have about this amazing UFO Spaceship, Spacecraft or invisible, transparent spaceship or whatever you like to refer to Alien Vehicles in and around Earth? It's about as brilliant as it can possibly get with this obvious UFO, it's just that NASA's crazy attempts at hiding this UFO haven't really worked. See, I get it that NASA can't dispose of photo's as these are all numbered, right. So they post them within a million other similar looking photo's and hope nobody will find them?
Guy's, here's a quick video which I've just screen recorded and narrated myself. The obvious star of this whole event is featured in this UFO sighting video. I had to record my thought's and feeling's on this brilliant NASA anomaly - even though I do get straight to the point. I thoroughly enjoyed putting my thought's down on video so-to-speak because it definitely ticks every single box that I can think of, what about you?
Related post
Mothership's Parked Insde Saturn's Rings Photos Taken By Voyager
But people are alway's going through the camera footage of all the Apollo mission's and all the other mission where astronauts and automated photograph's have been taken. This is why we have a plethora of amazing, unedited, unexpected but not wholesale unexpected, it's more of an "I can't believe what I'm seeing... until I realise it's NASA photo's I'm looking at". Then it all makes perfect sense and a wee bit disappointing because I want these supposed leaders to, well, lead.
Credit: UFO Sightings Hotspot/Archive.org/NASA Apollo 17/UFO Sighting's Footage/UFO News/Canva/Apollo 16 AS16-123 UVC Far Ultraviolet Camera/Spectrograph S201/Dutchsteammachine YouTube Video/Wikipedia.