This is the ultimate proof that there is definitely a real Alien presence on this planet. This is a NASA video that shows 2 UFOs defying physics.

These UFOs don't look like your typical looking UFO but then what we have here is NASA filming 2 UFOs blazing through our atmosphere.

I'm going on record right now, to say that this the only UFO video you'll ever need to see to know if Alien's exist or not. 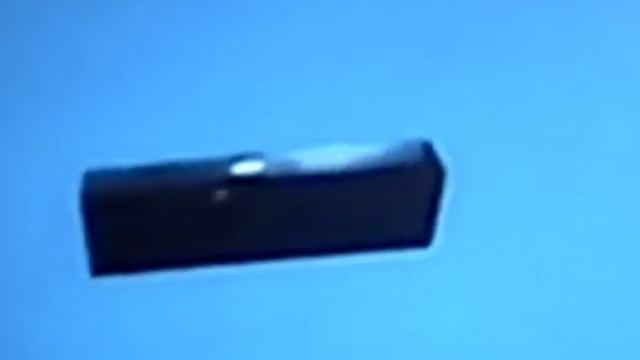 Credit: Express Online/Jeffrey Boys Jnr YouTube/UFO Sightings Footage/UFO News/Canva.
These 2 UFOs are defying the laws of physics and the laws of what's possible (if that's even a thing) but it's a fantastic way to explain how I feel about this. It's proof positive that Aliens are here, because humans do not possess anything remotely like these rectangle UFOs. They're going against everything that we know as being possible. There's no visible propulsion system or thrusters expelling fuel exhaust.
Wow, the details are amazing on this close up of one of the two UFOs. It's simply unprecedented if you ask me. I've not come across any rectangle shape UFOs before that have so much detail like this. The top of it shows like a small round glass window with another white button or some other sort of object. How the heck is this flying and is it using anti-gravity engines or anti-matter reactors... we can't get a gauge of how big this is. 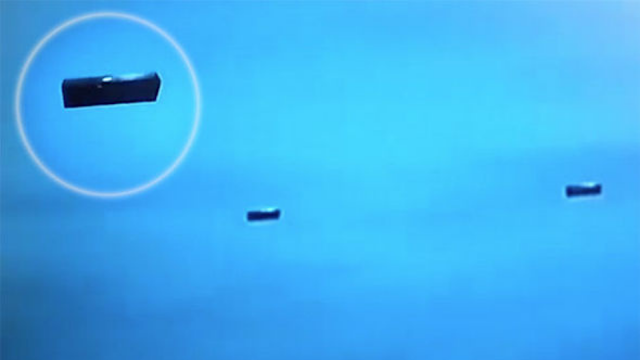 Credit: Express Online/Jeffrey Boys Jnr YouTube/UFO Sightings Footage/UFO News/Canva.
It's a square box for all intents and purposes that's flying at a speed outside of our atmosphere but close to Earth and they're absolutely gunning it! Nothing man made is gonna catch it except for a camera! That's no joke, it's a camera just like this one filming the unfolding event that's going to be the only thing to come close to "catching up with it".
Related post
The Clearest Silver Metallic Flying Saucer Type "Disk" Over London
2 UFOs flying or should I say, "whizzing past the Earth" and all we can do is say cheese! Personally I think it's diabolic to think if UFOs did come here, that we couldn't even meet them in low Earth orbit. Unless, I suppose if they gave us a week or so to allow private companies submit their drawings... 👀 That's literally what the official process is, now that NASA is using subcontractors to take apples and a few lenses, shampoo, a few more bits and bobs to the lowest bidder. 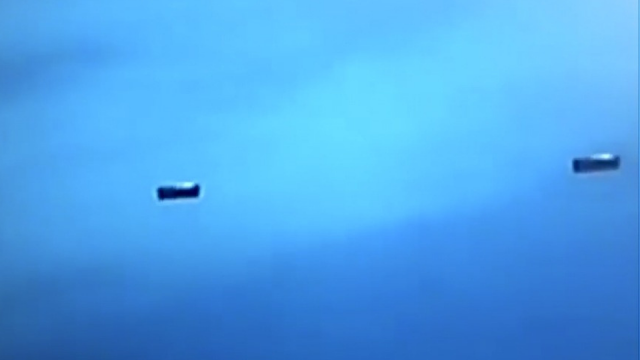 Credit: Express Online/Jeffrey Boys Jnr YouTube/UFO Sightings Footage/UFO News/Canva.
And to boot, they'd cover the whole thing up anyway's with a mission to fix a crucial part of the solar panels blah de blah. The people who filmed this UFO video should be allowed to release it on their own accord and the video. They should be allowed to tell the truth, they should be allowed to create panic if they want... Hmmm, okay I'm just starting to think about it?

Question:
Should Astronauts be allowed to publish their own video evidence independently of NASA - if they film a series of UFOs or just the single UFO, if they filmed it from space or on NASA’s property ie the ISS?

My first reaction to this video was:
I'm bloody speechless! In fact speechless is an understatement, I'm blown away by not just this stunning UFO video but also by NASA's refusal to acknowledge what we all know is true, that Alien's are here on Earth.
It's all NASA's own evidence anyway's so they're giving us mixed signals and it's so frustrating beyond the joke! And that's no joke neither. As an example, NASA releases a normal everyday video, right. Then someone finds 2 rectangular shaped UFOs in said NASA video as it's taken from a recorded live TV feed. But instead of NASA jumping for joy, they jump to their feet, shut the curtains or blinds, they rip out the telephone wire and shout out loud "lock down" and hits a big red button. Then everything goes dark...
Here's where the cover up starts, and it starts with swamp gas, weather balloons, damaged camera lens or some old film was reused with the old footage bleeding through. Also, it's a lens flare, or it's actually some test pilot footage that got mixed in with the new footage by accident... Seriously though and lies, they continue.

I could go on and on with stating the lies and the excuses that have come out of NASA that try to explain what we can see right in front of them. The only thing they can't say is it's a hoax.

And that's because it's their own footage given to the public. If they say its a hoax, they're effectively calling NASA a prankster agency, right. But what the hell is going on here because that's gotta be the best UFO video ever taken by anyone and that's bar none!
This is a brilliant UFO case, it would be perfect for NASA to investigate further and it would great for NASA to throw the weight of their agency behind getting the public answers because they have all the right equipment.
Related post
The Most Unusual Triangle Wing Shaped UFO Filmed Over London UK
It's not everyday that I come across a double UFO sighting especially when it's a video taken by NASA with the UFOs literally in front of them. This video is probably more than brilliant, I'm gonna call it epic real evidence. If I was to witness this my heart would be in my mouth, and my thought's would be racing. I would more than likely not be able to operate a camera because I'd be flying a plane and operating a camera so it's a very fortunate event that we have this UFO video at all, based on what I've just wrote. My hand would definitely be shaking because of the adrenaline.
There's 2 UFOs, square, they're both a black colour and shiny.
Having a prejudice about what a UFO looks like (innocent or not) based off a few TV shows or Hollywood movies is probably gonna be wrong. I'm certainly not letting science fiction dictate my own decisions because it's fiction. It's a good thing to take in as much information about a UFO sighting - like this one in this post and make a decision based on the info at hand.
Firstly, it certainly looks like a square box or something that doesn't belong in the skies of Earth. So that's a good thing. There's 2 of them which as anyone knows is always best for surveillance, reconnaissance and so the other one has your back. Single UFOs are always good but having 2 brings an extra layer of seriousness. It brings the witness, it brings an evaluator, it brings a sense of purpose, ideas etc and pretty much everything a 2 man team in our military would bring to the table.
It doesn't matter if none of that is usable or relatable but it's actually tightening the net on getting to the answers by taking away the obvious. It's probably not part of any standard model (if one even exists) but someone should put a rational model together that shows a way or how to get to he "more than likely" answers of a UFO sighting.
Oh it's a massive task, probably near on impossible because we're talking about putting together a model to identify Alien's.
Yeah, it's that blooming serious. It's that strange, it's not often that people put together a model to detect an Alien UFO.

Here's one thing I have learnt about this amazing UFO sighting - and that is that this UFO encounter looks rectangle, it's rare but not unique. So I looked into it further and low and behold we've actually got recorded evidence of another earlier rectangular shaped craft.

Here's the absolute mesmerising UFO video:
Please share your thought's and opinions also any ideas that you might have about this amazing cube shaped UFOs filmed from NASA's ISS. Also if you think about someone else who might know some more about this then please share it with them  cheers.
Credit: UFO Sightings Footage/UFO News/Canva.