As far as exceptional UFO footage goes, this is what I call a substantial UFO incident. It's a silver metallic UFO in the shape of a triangle UFO.

This UFO encounter happened over London in the UK and was filmed by a guy with camcorder which he just had time to grab and take a quick video and some photos.

You've really got to admit that this triangle-shaped object looks like serious business. There's a part on it's top surface which is very dark in colour, why is it totally off center and towards us or to it's right? With it's top being dark like this, is it a hatch or a part of it's windows maybe? Is it a metallic or unknown material door perhaps or is it something else entirely and could it be related to a weapons stash or is it where it's propulsion system is located?
You know, I'm probably way off because it's a "possibly Alien craft" and what do I know about Extraterrestrial vehicle's engineering maintenance manuals and their design? I'll tell you now, I wouldn't want to know because I'd either be an Alien or a sneaky top secret scientist keeping secrets from humanity which by rights is everyone's knowledge and not just the special people, lol. But seriously though, there's only one reason why Alien technology and Alien knowledge is being kept a secret and that's gotta be weapons, military technology!

The US wants it all for themselves so the military wing dings can feel superior and the fact that innately they don't trust anyone else "ahem", cough, cough Russia.

Other than what I've seen that has been reported or uploaded to social media and that's not just me who thinks that but almost everyone on Earth thinks it. The people who might know what this exact craft is are in Area 51, are in top secret bases, are inside off world bases, the hybrids must know and all the reverse engineers and the technician's know. Okay let's not forget about the scientists working on anti-matter and anti-gravity engines. 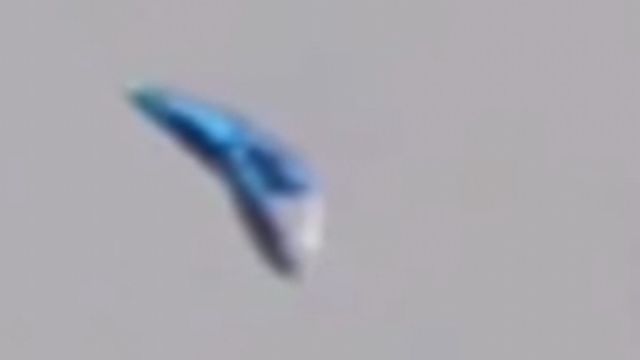 Credit: MUFON/UFO Casebook/UFO Sightings Footage/UFO News/Canva.
This aerial vehicles probably got an inertia dampner, anti-gravity system and can do the party trick that we saw on the UAP vehicles which wasn't showing up on normal everyday video. Only Flir (Forward Looking Infrared) cameras could see them and film them. This is an everyday camcorder video and photos but if it's just a case of primitive and everyday signals and receivers, which all cameras have digital receivers by the way, just behind the lenses then why can't they be blocked or damaged remotely beyond repair?
Related post
Blonde Haired And Green Eyed Woman Claims To Be An Alien Hybrid
If you shine a torch directly into a camera or a laser it will affect the lens sensor. It'll probably damage the whole camera depending on it's strength right, so why can't a craft, a magnificent Silver UFO which is in a wing like design and that appears Alien, have some sort of "defensive or offensive technology" inside of it? We just don't know (albeit publicly) how far ahead of us the UAP aerial vehicles are ahead of us, so how far ahead of us is this extremely detailed UFO?
It's not everyday that this type of incredible UFO is actually caught on camera but some day's destiny does throw us a freebie or a titbit if you like just to keep us all (UFO believer's) on our feet and interested in the UFO phenomenon. How does anyone describe this UFO other than a flying type of wing or a triangle-shaped object which just so happens to be silver with a section of it in blue.

Silver Flying metallic looking craft's are filmed in our atmosphere all the time. As a researcher I come across these types of craft's all the time and that's no exaggerated claim. They are literally everywhere and it's probably only luck that the ones we know about was even caught sleeping.

It's something that once you have seen it, you can never unsee it or never forget it because it's that strange. All I can liken it to is a flying Delta wing or a sci-fi spaceship or something like that? 2018 was a strange year because of where Ufology was at because of the previous year and the actual disclosure of the UAP apparent threat which we now know is totally legitimate.
Related post
The Clearest Silver Metallic Flying Saucer Type "Disk" Over London
So just a year after having Ufology confirmed as a totally real phenomenon and having it acknowledged we are treated to this fantastic UFO sighting. Ufo Casebook covered this as did MUFON which I suggest you look this UFO encounter up and do a thorough investigation yourself because it's a fantastic UFO incident. 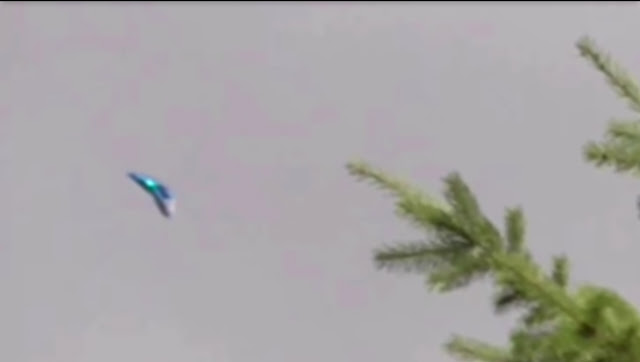 Credit: MUFON/UFO Casebook/UFO Sightings Footage/UFO News/Canva.
What with the UAP videos, many politicians were literally caught on the back foot by all of this and probably couldn't understand why it was been given any real credibility, but that's because society has treated this way (at arms lenth) for decades. Now the secret part of the Government has come forward with this information, politicians must get on board!
The eye witness said:
It happened over London, England  on the 23rd September, 2018.

The observer and videographer of this event states that he saw this triangle-shaped object flying above his head in London. He states that he just had enough time to grab his 90x zoom camcorder and capture video and still frames of the enigmatic vehicle. The object in question is seemingly unique in its color and shape in that the top or cupalo appears to be off-center as compared to other reports of triangle-shaped UFOs. Of course with today's technology it is easy to create something like this and it is wise to be skeptical. You will see a blue color along with gray on the other side with the blue, off-centered top. Take a good look and see what you think.

Here's the full, absolutely stunning "silver wing type UFO", UFO Casebook YouTube video:
Please share your thought's and opinions also any ideas that you might have about this amazing UFO sighting filmed over London in the UK. It's been acknowledged by the Government of America and the Governments of the world that there's definitely a phenomenon now going on which must have action taken because as we see in the various military videos that these thing's are invisible unless looked at through Flir cameras which stand's for "Forward Looking Infrared".
Also if you could share this post I'd appreciate it, cheers.
Credit: UFO Casebook/MUFON/UFO Sightings Footage/UFO News/Canva.