UFO Lights in A Row Over US

This is a spectacular UFO Orbs formation from the US. It's not been posted elsewhere that I can see so that leaves it with a lot of doubt. Is it real.

Four lights in a formation row during the night is a bit strange as nothing normally creates this kind of spectacle except for UFOs, right.

The US is undoubtedly the UFO capital of the world, so much so that we're becoming accustomed to seeing a UFO without even looking into it anymore. It doesn't matter if we film UFOs because we expect them now, they're becoming a regular occurrence maybe we even know that it's just a matter of time before we see one. 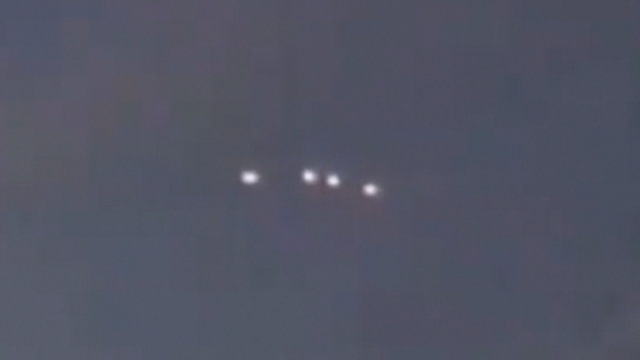 Seeing these UFOs in a row with their light's blinding has left an impression on the eye witness filming it definitely as he sound's like he's in disbelief. Other than that it's not even made the news which is really strange. I've gone back many years, I've searched for over an hour to get more information but there's nothing and I've tried a reverse image search from a snapshot and the Google keywords four lights UFO and various versions of that aren't bringing this exact same scene up anywhere...

So now I'm asking myself, is this real because I can't find it anywhere...

Does that point to this been a fake because it's a few year old that I know of from the Instagram page, to be honest I really don't know what to make of it? I'd expect a lot more information if I'm being honest with you, even if it was reported anonymously I'd still expect it to be posted elsewhere by other people, right?

It's not the Las Vegas 4 light's in a formation that was seen there and filmed because that UFO sighting made every headline in the land, plus the sky is very different. It's not the January 20th New York City UFO incident which also had 4 light's in a row filmed there by an eye witness. These Texas UFOs really do seem to be unreported on?

It also seems that nobody else in the area saw the UFO which is an anomaly all by itself. You'd think that lot's of people saw this and filmed it also, but no. Absolutely nothing else is coming up in any search results...

Texas has been seeing a lot of UFOs but not in formations or like this one. Arizona had the Phoenix lights incident which look similar to the one's here but they were in an arrow type of formation. This is why I'm stumped because I can't find this exact same UFO anywhere online unless you guy's can find it? Please let me know if you do and I'll be able to update this post, cheers.

IF you know anything about this UFO formation then please let me know, cheers.