These 2 UFOs are more than likely the real deal. It's only my own opinion but all you have to do is check it out for yourself and you'll understand.

I racked my brain trying to think of a fitting title but I struggled and I couldn't think of one for the life of me,  so I just wrote what I saw and wow, it's exactly what happens.

I really hope I've stumbled upon one of the best kept secrets in Ufology or at the least, I've stumbled upon a little known double UFO sighting which is top notch. I'm definitely not questioning it's authenticity because to me it looks like it's real, feels like it's real and I'm pretty sure I'm not alone in thinking that it is a bona-fide, straight up, UFO sighting! 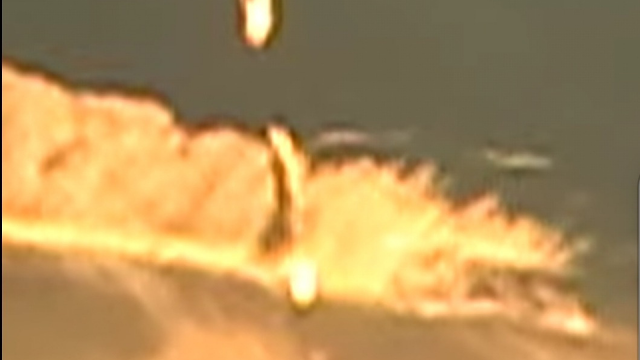 Credit: Collectivegreatawakeningdotcom YouTube video/UFO Sightings Footage/UFO News/Canva.
Video quote:
It started out so small and it just grew so fast!
My feeling that this is a real UFO sighting isn't exactly confirmation and it's definitely not science. It's just part of what makes up my reasoning that helped me on a personal level - get to my own conclusion. 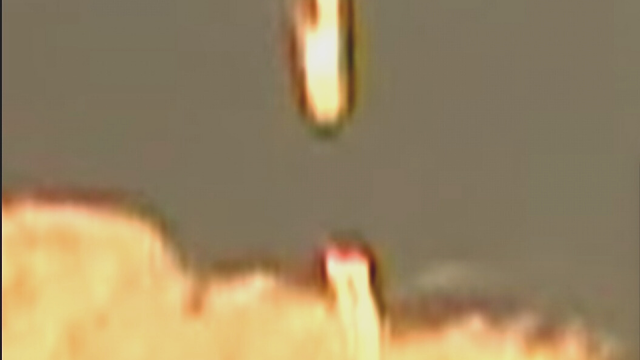 Credit: Collectivegreatawakeningdotcom YouTube video/UFO Sightings Footage/UFO News/Canva.
It's a 4:31 seconds long video and the strangest of thing's have been caught on film. Even the guy filming this doesn't know what he's filming, also the woman in the video doesn't know what these unusual oddities are? We see the wildest behaviour happening with a supposed Jet (I quickly doubted it's a Jet though). Then at 26 seconds into the video another UFO aka flashing light appears directly below the "first UFO that we see in this video which is also smoking" I don't think it's contrails.
I don't know what this blinking or flashing UFO under the first one is all about or why it's doing it but it seems to be part of why it's changing it's form, in fact it's transforming from a flashing light into a white sphere at 35 seconds. Then it begins to get bigger, longer and almost as if it's leaving a trail of smoke behind it just like the first UFO did!
To say that this video is bizarre is an understatement. To say this video is a hoax is wrong, dead wrong! That's a very real double UFO sighting video. Tell me what you (the reader) thinks about the authenticity of this video? See, what makes it really interesting is especially as we have multiple eye witnesses confirming on video (albeit just out of camera view) and a changing - before our very eyes - of a UFO!

In term's of having an all time favourite UFO sighting I can definitely see this UFO video being in the top running for the number one spot?
Lee Lewis UFO Sightings Footage.

Then the second UFO in the bottom part of the screen also starts to give off a stream of white smoke. To be honest the top UFO in the video actually looks like it's 2 UFOs, side by side, right next to each other. As I'm watching this video and stopping and starting, then commenting here in this post. I find it's the best way to give a full description of what I'm seeing instead of just giving a general impression of what I saw or an overall opinion on what I "thought" happened 2 hour's later etc.
Related post
Military Unit Recovering A Silver UAP
For research purposes I find it's the best way for me as I tend to analyse it as I go and that's a good thing for me because it means I'm addressing all the thing's that might be of use later on, ie seeing similar thing's happen in other UFO videos and I can then match up other UFOs and say with more certainty if it was here on such and such a date.
I know it's a massive task, to keep track of all UFOs and how they behave but if I or "we" can narrow the field down significantly if we only focus on the UFO sighting's that have a date, a time and a place just like this very UFO incident now?
This way it makes our "task of documenting UFO behaviours" a lot easier. I know it's for keeping a track on where these UFOs go and possibly what they're doing but if we documented some and it works, then it's irrefutable evidence that Top Secret drones or Extraterrestrial entities operating in Earth's atmosphere and that's huge!
This UFO video is from 2015 on the 19th September in Snowflake, Arizona, US. It was filmed between 6 am and 7 am.
This is a snapshot (below) from the video which shows exactly when the UFO on the bottom actually transformed from a flashing white light into a white Orb at 0:35 seconds this is the screenshot: 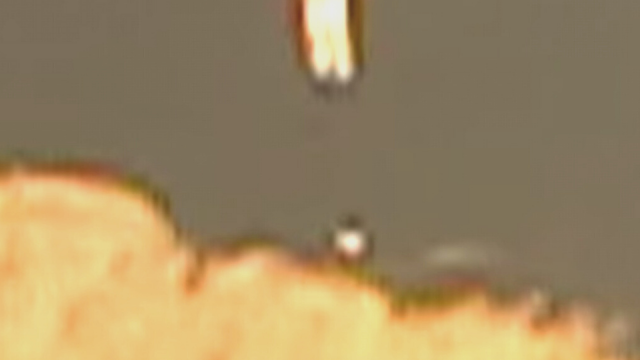 Credit: Collectivegreatawakeningdotcom YouTube video/UFO Sightings Footage/UFO News/Canva.
Iwe can see in the screenshot directly above, the flashing white light UFO turning to a white - what looks like a solid UFO Orb? It then starts giving off smoke so does that mean it's just appeared from thin air and it startstomove awaybut downwards? That's impossible though as nothing can do that, right?  So, something else must be happening that maybe I don't understand? That's not hard lol but even so, it's still all unfolded in the (what I believe to be real video) so there's gotta be another explanation and that's just the way it is!
The woman in the video then goes on to say...

"this one here on the bottom is reaching up and the other is coming down, this one over here started to appear from nowhere, I saw it"

Let's try to get somewhere with this sighting, we have the dates, the times and the place. It's definitely enough information to go on, good luck and if you do find out any more info please let us know, thanks.
Here's the extraordinary YouTube video:
Please share your thoughts and opinions also any ideas that you might have about this awesome double UFO sighting. Please share this post if you can as I'd really appreciate it, cheers.
Credit: Collectivegreatawakeningdotcom YouTube video/UFO Sightings Footage/UFO News/Canva.