Blake Cousins from Thirdphaseofmoon was sent a really good UFO video by a person who wishes to remain anonymous. The video shows a pilot engaging UFO.

UFO sightings are pretty much accepted by most people now, but the UFOs themselves are still in doubt because of CGI and animations. 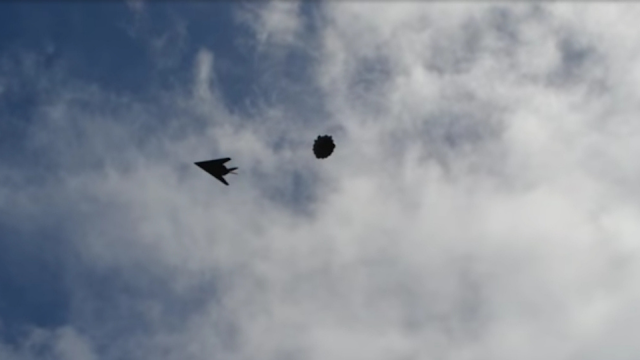 Credit: Thirdphaseofmoon YouTube/UFO Sightings Footage/UFO News/Canva.
This is spectacular in every single meaning of the word - what with the eye witness apparently filming from Groom Lake property and being able to get excellent footage of a UFO and Jet Pilot engaging each other! That would be a first in my book, it is what I call "mind blowing". It's got to be an insider able to film this close and it's got to be someone who either searches people going in or coming out of Area 51.
In other words, by process of elimination the answer could be a security guard maybe? One of the Kamo dudes because I've seen footage of single guards in the white vehicles that guard the perimeter of Area 51. Or if it's not a Kamo dude then it could be a contractor or a military insider with access to the top secret information?
Related post
Massive UFO The Size of a Planet on NASA’s Telescope
The answer to the origins of this UFO video is quite possibly never going to be known to anyone but Blake Cousins and the eye witness filming this otherworldly encounter? That's my initial thought and also I'm going to say that the folk's that exist at the top tier of Area 51 knowledge might of already had the investigation and brought to justice the culprit or culprits because it did happen a long time ago in 2012... 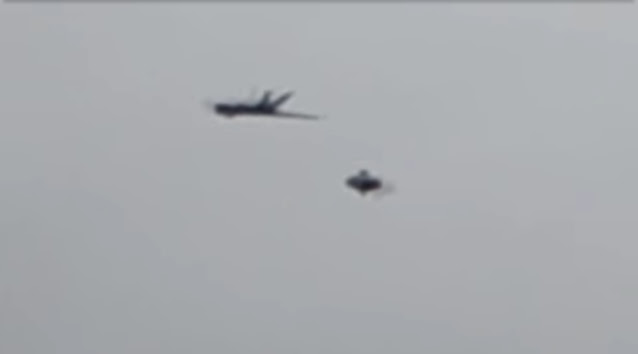 Credit: Thirdphaseofmoon YouTube/UFO Sightings Footage/UFO News/Canva.
Sure of course I can take the easy way out and just "fake" and turn the lights out "and go to sleep". But what I find works is to get people talking about the UFO sighting and try to actually get some answers. I don't have any qualms in making a decision about a UFO or asking questions about any UFO sighting and posting it for the world to see. Even when they try to belittle me by leaving nasty comments about my spelling.

If you go online to comment about people's spelling mistakes on a person's personal blog, then you are a sad individual and I genuinely feel sad for you.

***
Here's the full description on the video:
UFO Sightings Stealth Fighter Jet Engages UFO Controversial Footage! Groom Lake Nevada! Source of this video wants to remain hidden but has shared this exclusive video with Thirdphaseofmoon.
I really don't care about what people think about Blake Cousins because it really has nothing to do with anything as it's just a clash of personality and I honestly don't see why people get upset with someone for trying to uncover the UFO cover up. I just don't get it, we've all got opinions and thoughts, views and ideas including suggestions and comments and expressing them is always a good thing unless it's derogatory and uncalled for which I could understand but it's nothing like that.
Anyhoo, the Jet in this video seems to be engaging with the UFO and that's absolutely mind blowing! This video was created in 2012 which is nearly a full decade ago. So based on the dates, we can definitely say that the US Government's known about UFOs and pilots engaged with these UFOs. If the Government's willingness to lie about UFOs is so obvious now, I wonder what else they've been lying about? And that's a valid point to make.
Everyone knows that if you tell a lie, you have to tell more just to keep the original lie going "especially" when they're constantly being challenged by the public regarding UFOs and Area 51, S4, Roswell to name but a few. Also, just because someone wants to remain anonymous when they send you a UFO sighting video you can bet it's because there's a bloody good reason for it.
Here's the full video, enjoy:
Seriously think about what you want to be real, what is real and what might be real? Because there's a huge difference between all of them. Don't be so quick to dismiss a UFO sighting because now they have told us UFOs are real, that UFOs are here on planet Earth, we need to be more open minded than ever before. Please share this post, cheers.
Credit: Thirdphaseofmoon YouTube/UFO Sightings Footage/UFO News/Canva.