This is the evidence that shows a UFO crash landed on Mars. There's a gauge on thee surface right behind the UFO. Yhis looks exactly like a UFO.

I haven't seen this before and I've done so much research on Mars official media covering many sources which includes photos and live videos, all going way back till the present day.

There's so many updates to this post that I literally don't know where to start? Since this Flying Saucer (Disk, if you ask me) was first photographed by the NASA Mars orbiter there's been ice found, animals as well but that's depending on what you believe either your eye's or "years worth of beliefs" that life on other planet's doesn't exist? And the latter is based on what when you think about it? Absolutely nothing! NASA's in space actually looking for evidence of Extraterrestrial life. So it can't be NASA, they might say that they haven't found anything yet, but they'd never say Alien life doesn't exist in space! Because if they do say that, they will be negating their own ethos. It's us, we actually tell ourselves that life in space doesn't exist. NASA's out there right now in August of 2022 looking for it! 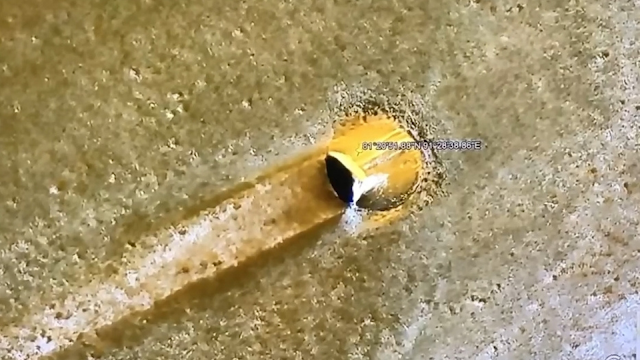 I'm also guessing that you might not have seen this as well because your here reading this too? You'd be right to think that this is interesting and to be honest with you, I think it's got potential as well to be the real deal.

The coordinates are there for you in the video itself which you'll find below. Google Earth, but on the Mars section is a great place to look for Mars anomalies. You will find stuff if your willing to look for it.

It's the gauged out surface behind the back of the UFO that's convinced me, plus the perfectly round shape of the UFO.

How about this then; it's just over 400 feet long and it's perfectly round in it's diameter. I'm always blown away with the stuff discovered on Mars because out of all the planet's and Moons with artifacts found on them, Mars gives us practically everything! And that's no exaggeration because you've probably seen the skulls, the guns, the structures, spoons, animals, UFOs, doughnuts lol and even soldiers Stalking the Rover.

Okay, maybe there's a wee bit of Pareidolia going on and people like me are seeing what we want yo but the list is endless with everything under the Sun. And that's no joke neither, if you put into Google search the word Mars then followed by any word such as tree or "doughnut" for example, it will have a photo of it. That as they say, is Bonkers.

Just because of the plentiful and various artifacts that can be found on Mars, more so than any other planet in the solar system as it goes, it gives me pause for thought and it point's to there been intelligent life once on Mars in it's history which is billions and billions of years as a planet. It's very clear to me that we live in a neighbourhood and we're part of a vast group of lifeforms that can and does (in it's early beginnings), successfully travel from planet to planet's. It's just the homes are planet's and everyone else in the neighborhood has a very big piece of land in between the homes.

Here's the full video with the coordinates in the video straight from Google Mars: