At an air show in the US an F22 Raptor Fighter Jet encountered a Flying Saucer which flew right over it and it was filmed by an eye witness.

This is the moment that a Flying Saucer flies effortlessly and fast right past an F22 Raptor fighter Jet whilst at an air show.

This UFO footage has been put through multiple filters, by many different people over the year's and the people who have seen it still haven't been able to debunk it "yet" which doesn't mean anything really in either way. 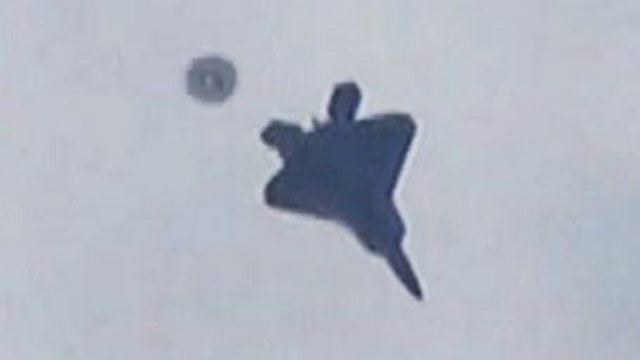 Credit: LooknowTv YouTube Video/UFO Sightings Footage/UFO News/Canva.
I personally think it's because it passes all the test's but no professional expert wants to put their names to it? Unfortunstely there's no location for where this happened but that's okay because believe me, since 2013 we've had a landslide in opinions, beliefs and support for Ufology but in the professional expert world, people are still reticent to either get involved or put their names to it. Oh they'll do the expert work but say keep me out of it, that renders the work null and void because if you presented it with the UFO video, people could say "you've just plucked it out of thin air". It needs expert's to grow a set and start to think about the real world and not just all about what's good for them. It sounds great, but selfish I suppose, especially when people's career's are really at stake.
Related post
US Navy Destroyers Comes Under Attack By UFOs | The Aftershock Hits Navy Ship
From what I have seen, it looks real but even I know that software and graphics are so good nowadays and over the counter software that's relatively cheap can create anything, and create it next to exact if not perfect. Anything that you desire can be faked, hoaxed and pranked. Take someone's highjacked F-22 Rapter Jet Fightet footage from an air show for instance and add a UFO to it, hey presto it's a hoax created by anyone. But I have hope, I really hope that we have a real Flying Saucer on video. 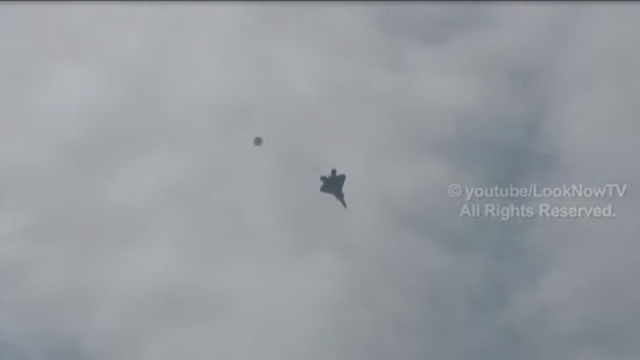 Credit: LooknowTv YouTube Video/UFO Sightings Footage/UFO News/Canva.
But I'm alway's ready to give the benefit of the doubt regarding something that I can't prove and although I'd like my senses to be based on scientific fact, they're just not! Nobody can look at a UFO sighting video and say "real or fake" I mean they can, but it isn't fact. It's a guess, my guess is that I'd like for this yo be real. The camera is taking probably 60 frames per second which would be right for this to be solid on the second and blurred in-between which is what we see.
If it was digitally added, we'd see a continuous solid Flying Saucer no matter what, wherever it was paused and that's my understanding? I'm not an expert, I'm a UFO enthusiast who loves the idea that UFOs are real and Aliens are here on Earth. There's probably millions of people who have the same opinion on that. Only video and graphics forensic experts with training and degree's and "years worth of training" might I add, can tell us for sure if this video has or hasn't been tampered with?
Here's the description from the YouTube video quote:

An amazing UFO was filmed passing directly over a F-22 Rapter Jet. The UFO passed over the jet at a high rate of speed, March, 2013. If you look at the UFO closely, you might be some markings-or a zigzag circular pattern that wraps around the middle of the UFO. RIght now, more details of this video are unknown. We are happy to present it to you here on youtube/LookNowTV first. Stay tuned! Sorry if you viewed this again. We had to re-upload due to an internal youtube video glitch error, on the orignal upload.

Here's the full YouTube video:
Please share your thought's and opinions also any ideas that you might have about this amazing UFO sighting filmed at an air show showing an F22 Raptor fighter Jet having the time of his or her life. I'd definitely appreciate it if you could share this post with someone who you think would appreciate it, cheers.
Credit: LooknowTv YouTube Video/UFO Sightings Footage/UFO News/Canva.