Costa Rica has had one specific UFO incident which has become known as the best UFO photographic evidence ever taken. And I have to agree. It's great.

The clearest UFO photo was taken by the Costa Rican Government mapping agency whilst on board an aeroplane taking HD (for the time) mapping photo's.

Firstly I'm gonna point out that the biggest piece of this epic and historic UFO photo jigsaw, is or was, the chain of evidence! Oh believe me, this was under scrutiny and attacked by the ney sayers, the Costa Rican equivalent of the MIB (Men In Black) because even they turned up. This Flying Saucer was absolutely huge, estimated to be at least half of a football field in length to a full sized football field in size!
The study was funded by the Costa Rican Electricity Institute (ICE) to determine water sources in the area for their planned hydroelectric project. 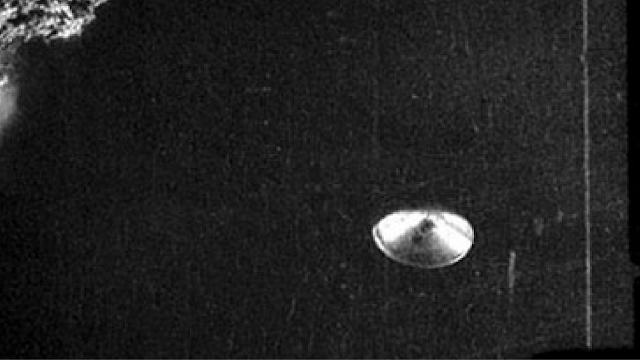 “When the photographs were developed, one of the frames (with the time of 8:25 a.m.) showed what seemed to be a metallic disc about 160ft in diameter, which had just left, or was on the point of entering, the lake. It was giving off light, and had made a sudden manoeuvre at the instant the photo was taken. The object showed up on neither the previous frame of film nor the one afterwards. Checks on the negative eliminated tricks of the light as an explanation.

I think you should consider reading into this because it's as good as it gets, it's never failed to live up to expectations as far as I can tell? If your serious then check out these two link's  which are here and here, you'll be off to a good start. Maybe I was lucky and where I started from I kinda stumbled upon the most interesting facts and part's to this whole UFO event? Bryce Zabel of Medium (awesome writer by the way) wrote an intriguing article about this incident. After five decades of people looking into this, what has been concluded can be found in the "Cometa Report conclusions", you'll be more hopeful that what you believe is real.
Here's a quick quote by Bryce Zabel:

This document has long been thought to be among the most open statements on the UFO subject ever made. Titled “UFOs and the Department of Defense,” the report that was sent to the French government concluded that the ETH, Extra Terrestrial Hypothesis, was the most likely explanation for what’s truly going on with these objects.

And what's become of this expert led investigation into the UFOs and the "Department of Defense" report? Well, not a lot actually. But you can bet that it will get looked into when more and more UFOs keep coming.
The greatest secret in human history.
The New Yorker, which you must read this article because it's enlightenment 101.
Here's a quick quote from thisNew Yorker article by By Gideon Lewis-Kraus, April 30, 2021:

Some of these extraterrestrial spaceships had been “downed, retrieved and studied since at least the 1940s and possibly as early as the 1930s.” Efforts to reverse engineer such extraordinary machines had led to “significant technological breakthroughs in energy generation.” These operations had mostly been classified as “cosmic top secret,” a tier of clearance “thirty-eight levels” above that typically granted to the Commander-in-Chief.

Mind blowing information is there to be had, it's out there ready for you to read, to understand and become aware of what is going on out there but on a different scale to everyday life! It's exciting, it's fascinating and it's not a joke to be laughed at. That response was deliberately introduced to the public so that people would not want to even talk about it for fear of ridicule by their own family, friends and even Dr's, Nurse's, mental health professionals.
If talking about UFOs is insane then why has the US Government and the UK Government been investigating UFOs for decades? Do you see the hypocrisy and the lengths they will go to, to stop people from knowing about Alien visitors... what I'm saying about UFOs and Aliens is all verifiable, so how on God's green Earth can it be insane? For instance, this UFO photo:

The Costa Rican National Geographic Institute on the 4th, September in 1971 had accidentally or inadvertently and without knowing beforehand that they had just taken the best UFO photographic evidence that has ever been taken. On board the airplane were photographer Sergio Loaiza, a specialist in aerial photography, plus geographer Juan Bravo, and topographer Francisco Reyes. Photographer Loaiza was using a R-M-K 15/23 camera, a special one-hundred pound map-making beast, donated by the German government and rigged under the fuselage of the plane. The film used was black-and-white emulsion with an ASA speed of 80, expected to produce a high resolution negative.

Sometimes I wonder if people want to know about UFOs because I've asked a lot of friends of mine about their personal views and opinions about UFOs and Aliens alike. Put it this way, most laughed, most looked distant, some actually tried to be nice and fake an interest. But yeah, sometimes I do wonder if the world even want to know? I put it down to the Governments disinformation of UFOs and how it's acceptable to ridicule someone for a UFO and Alien belief but yet it's reprehensible to ridicule someone who believes in God? Beliefs are a deeply precious thing and an important part of a person's whole make up. Without beliefs charities wouldn't exist. Without beliefs there would be no religion.
Related post
Top Secret Flying Saucer Filmed in 1992 it's To Big To Be Man Made
There's alway's something more to be written in the cases of undeniable and very real photographic evidence of Flying Saucers and UFOs that has been analysed by top professionals in photographic evidence analysis.
Here's a quick Alien Disclosure Group YouTube video which was filmed by a pilot over Costa Rica in 2013:
Researcher Mick West is a ney sayer and has his own argument which can be found here. I'll tell you what though, he's blooming thorough and very passionate about getting to the truth. Whereas I'm a faith based believer he's a science based believer (if I'm wrong I apologise but that's the impression I got) and while being a believer is great being a science based believer kinda leaves no room for imagination or "what if" and let's just think about the implications of such a thing etc. Science as far as I'm aware absolutely leaves no room for exploratory work because it only deals in presented works. Research and development or investigation and exploratory work into UFO sighting's is totally different, so no wonder science and believer's are always butting heads or arguing and having heated debates! One does all the work and has a huge insight because of the exploratory investigation while the other just comment's on the end conclusion.
So, for me personally I'm sticking to a faith based hope and a belief in that the universe is huge, so we must have neighbours because for sure as I'm here right now, there's plenty of space! Oh they're here alright. Remember when the US Government declared that UAPs (Unidentified Aerial Phenomenon) are real and released the 3 videos... Just look up the word "phenomenon" real quick. Do you see what it's meaning is? A fact!
A fact or situation that is observed to exist or happen.
An understanding of how big space is and if I was to literally show it to you in a craft that went 10 thousand miles per hour, we would never get there as it's expanding, lol.
Credit: Costa Rican National Geographic Institute/Sergio Loaiza/Juan Bravo/Francisco Reyes/Bryce Zabel of Medium/Cometa-Wikipedia/Alien Disclosure Group YouTube/UFO Sighting's Footage/UFO News/Canva.