The KGB actually recovered an Ancient Alien being from a tomb in Egypt. The video looks absolutely real. The evidence points to this video been real.

It's not a joke, apparently an Alien wrapped just like mummified King was discovered in Egypt and subsequently recovered by Russian KGB forces.

This isn't just huge, this is amazing and not only because finally the Russians have their own possible recovered Alien but also it's because we've now got proof that ancient Egypt was infiltrated by Ancient Alien being's. Credit: Ancient Code/AETOS-NEWS/UFO Sightings Footage/UFO News/Canva.
I'm not surprised by this video because it's Russia, everything in Russia has the potential to end up sold on the black market because if you know anything about communism you'll know that capitalism is the Devil and there's no such thing as free enterprise.
Related post
Abandoned Ancient Alien UFO/Ruins On The Moon
In Russia back when this video is from which looks to be at the height of Communism in the 40's, everything in Russia was owned by the state. The camera, the army vehicles, the radioactivity detector, the gas mask, the lot. Even the tractors on Russiam farms are all owned by the state, nobody owns their own home, the wheat in the field is owned by the state as well.
Below we can see a huge convoy of KGB Agents in massive military vehicles. The camera hardly even knows they're there! If someone spent a lot of money on props like these, believe me they'd make sure they got their monies worth and at least film some more of these expensive military vehicles. That's just human nature which I'm sure you'll agree with? 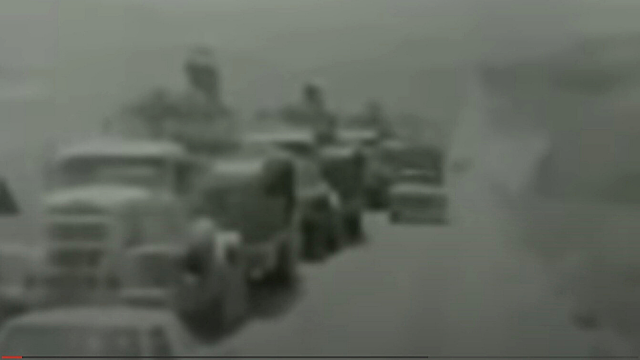 Credit: Ancient Code/AETOS-NEWS/UFO Sightings Footage/UFO News/Canva.
So, no wonder this video has ended up on the black market which was a huge black market by the way and because it's an ancient Alien being, it's got value to a westerner and then sold on to someone. Which after decades it's then sold on to whomever owns it just before it's ended up in the hands of someone who's put it on YouTube, phew!
There's definitely a lot of "someone's" in Russia, lol.
As far as I know and am aware this is a real Ancient Alien and there's no evidence that say's this video is a hoax? But it could be, I'm very aware of what people can claim though and that seems to be enough for some people to believe and it's enough to throw doubt on anything Alien conspiracies. But in this case I'm going with the "scale decision". Basically that means we separate the two arguments into two groups and see which one comes out on top?
So, there you go. The scales don't lie, actually to be honest with you it's just a way to say that people who say it's fake is just spouting opinions and assumptions based on nothing. I'd definitely prefer to have an actor from Russia to come forward with evidence that he was paid to act as a KGB Agent and had proof he was filming on a movie set. Then, I'd like him to have photos of him with the other actors and the actual Alien in sarcophagus and the coffin etc or even to still have some props from the set with thrm in some personal photos. Now that would be irrefutable evidence, right.

So I'm afraid whats good for one is good for the other or do the people who say it's fake have their own separate rules? EXACTLY MY POINT!

The KGB in this video look real, the stage or set is absolutely huge, it's filmed in Egypt. It's correct KGN uniform and the vehicles look correct. It's definitely underground, it's everything you need in determination of a real video.

Related post
Train Wheels Discovered on Mars ie Ancient Civilisation Definitely Existed
Anyhoo, here's a brilliant piece of the story with the most interesting facts, and it's something that once you know more about it, you'll definitely want to know even more. check this quick website quote out.

Quote:
It is really difficult to find objective evidence that could confirm the accuracy of this report !!!! The only valid opinions provided are from the American TV show itself which at the time of the transfer, according to which the team of experts after the evaluation of the film confirmed its authenticity !!!! The US television network has released the film once and since then it has not been republished anywhere and there is no copy of the video available other than those that are available thanks to those who took the time to record the show !!!!
The famous film presents the KGB on a secret mission in Egypt, codenamed "Isis Project", in which the Soviet government discovered the existence of a mummy which seems to have nothing to do with humans but with an alien !! !! Before the video was broadcast in America, the film had never been played outside the KGB structures !!!!
It all started with the revelations of Viktor Ivanovich (rbth.com), a Russian neurologist and astrophysicist where he was hired by the Kremlin as a scientific adviser for the development of advanced propulsion systems !!!! According to him, Ivanovic had access to some secret KGB files which referred to a special mission in 1961 as part of the "ISIS" program, which aimed to discover traces of lost knowledge and technology from Ancient Egypt, which could be used for Russian military applications !!!!
The mission team consisted of Egyptologists of the Soviet Academy of Sciences, Herman Alekseen of the Hermitage Museum, an Egyptologist, military experts in chemical and radioactivity, and some Gamel Abdel Nasser and the Vice President of the Republic of Egypt! AETOS-NEWS.

So, there you have it literally from a few sources. The information overall is very useful and point's to something been recovered and that it was taken to Russia.
Below is an Agent of the KGB which he's looking at a relief or Ancient hieroglyphs on the wall of the ancient Alien's tomb. 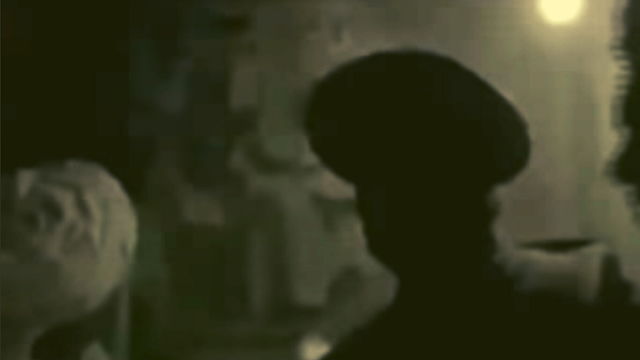 Credit: Ancient Code/AETOS-NEWS/UFO Sightings Footage/UFO News/Canva.
But if it was an Ancient Alien, that's the only thing which is the unknown because it was wrapped in something so we couldn't actually see it. The video is real, we've all just seen it. It's if it's an actual Alien which is the literal unknown.
Here's the actual full YouTube video:
Please share your thought's and opinions also any ideas that you might have about this amazing Ancient Alien being in an Egyptian tomb recovered by KGB Agents from Russia. Please share this post with someone who you think would appreciate it, cheers.
Credit: Ancient Code/AETOS-NEWS/UFO Sightings Footage/UFO News/Canva.