This is a very good out of place artefacts statue because it shows us a very clear and detailed laptop in ancient Greek history. It's got USB ports.

It's a new day, it's a new start, let's start off with a brilliant but bizarre Oopart (Out Of Place Art,efact) it's a laptop in an ancient historic carved statue.

It's a bit strange, even bizarre but I've also seen this kind of thing before in another carved statue that actually had a smartphone which was posted online by someone else a while ago. The chances of it been real were always going to be very slim, but this one here below in this fantastic picture is a bona-fide real ancient statue.
I'll post a picture of it below with its place of origin in writing below it and the date and the place where it's on display now... prepare for a brilliant mind blowing time lol. It's the USB port holes that send this one right over the line and into the WTF land. This is a 100 years BC (Before Christ) artefact which is over 2K years ago. I'm absolutely stunned because it's so old and definitely something that I find interesting as it shouldn't be there. It looks out of place. 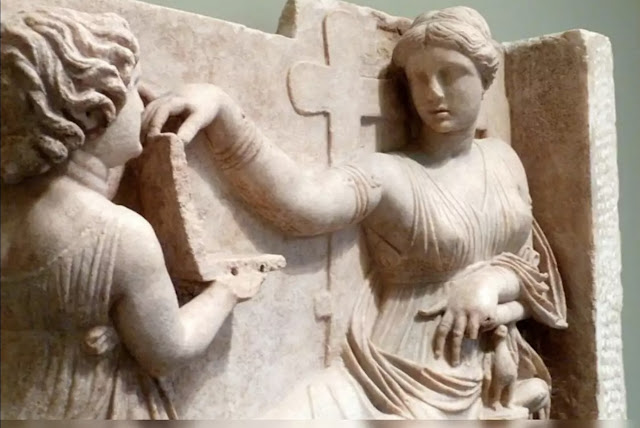 An ancient greek carved statue from 100 BC. A Greek art sculpture, put on display at the Getty Museum in California, depicts a “Grave Naiskos of an Enthroned Woman with an Attendant” dating back to 100 B.C. It has a queenly woman, gracefully seated on a chair with her right hand at the lid of a shallow box held by a (servant) girl.

So now that we know this is a "shallow box" lol whatever that means? We know that the carved sculpture is definitely real. It just proves that this is not a modern day sculpture recreated by a hoaxer. So it really is up to you to decide what this actually could be? "I know what I think this is because I believe in ancient historic Alien's". But even if it's not a laptop, the striking similarities are definitely going to give us a conversation piece 😉.
Is it nothing more than pareidolia which basically means that it's nothing more than seeing familiar patterns in objects.
Statue of a laptop or an Oopart?
Quote:

There are a number of theories as to the cause of this phenomenon. Experts say pareidolia provides a psychological determination for many delusions that involve the senses. They believe pareidolia could be behind numerous sightings of UFOs, Elvis and the Loch Ness Monster and the hearing of disturbing messages on records when they are played backwards.
Pareidolia often has religious overtones. A study in Finland found that people who are religious or believe strongly in the supernatural are more likely to see faces in lifeless objects and landscapes.

This one is just as good as any of the strange and brilliant Ooparts that I've ever seen in the past. How can a statue have carved into it something that clearly looks like a laptop but be from thousands of year's ago? I'll tell you now, it's an amazing and a bizarre coincidence is what that is. The ancient Greeks where very good at everything from math to inventions and Democracy.
Quick quote:
The ancient Greeks were the first to create a democracy. The word “democracy” comes from two Greek words that mean people (demos) and rule (kratos). ... The first known democracy in the world was in Athens. Athenian democracy developed around the fifth century B.C.E.
Here's a video from YouTube's Apex TV showing us all a fantastic ancient historic carved statue anomaly of a laptop which even has a set of USB ports that are carved out into the side of the strange "shallow box". Guy's, it really is what it is, I don't know what ancient Greeks used to keep inside of a box this short and with hardly any volume to it, just what could be kept inside this box?
Description:

An ancient Greek sculpture contains a mysterious object that bears an amazing resemblance to a modern laptop. Conspiracy theorists have hailed this sculpture as proof of time travel. Could this be evidence that time travelers have brought modern laptops to the past? What do you think?

Please share your thoughts on this amazing but bizarre Oopart. It's obviously of some importance and must stand for something? What's going on in our historic past as it seems to be changing before our very eyes or we are just waking up to it now.
Credit: Times of India/UFO Sightings Footage/UFO News/Ufosfootage/Getty Museum.