Theres a very good discovery happened at Lake Michigan because a ring of stones underwater have been discovered. Like Stone Henge in the UK it's real.

This is mind blowing to say the very least and if this is legitimate* it puts humanity much older than we could ever have imagined.

There's a couple of intertwined stories with research. It's actually got a lot to say about our time lines.

To back this up, please check this link (The traveller World Guide) and that's because of this quote:

A team of archeologists discovered a similar structure under Lake Michigan. It’s 2021 and we still have no answers regarding its origins. Let us take a deeper look at this mysterious structure. 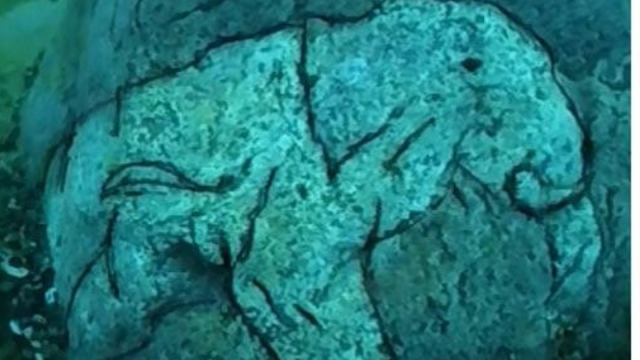 Above is the Mastadon Dinosaur carved onto the stones in Lake Michigan. 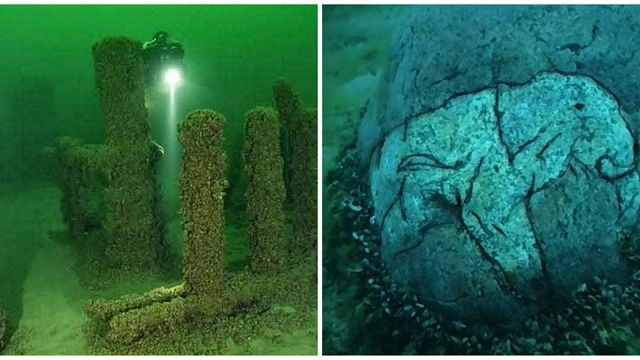 The stones, the carvings and the divers in the image above. Below is an archaeologists image of the stone with the Mastadon Dinosaur carved onto it. Below is the actual Stone Henge of Lake Michigan. 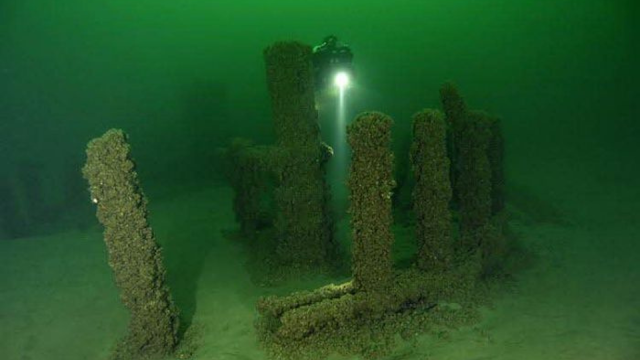 It's still not been disproved and those saying that it has, well you should take it with a pinch of salt. Look into it, do your own research like I have, please it's so satisfying when you research something and you learn that someone is throwing spanners in the workings and misleading the story. I implore you to check, and then double check and then verify it. Wait a bit, check it again, cross reference "thus far" and make sure that you get your story straight! Quite - literally lol and how that phrase was intended in the first place, before it was highjacked by the bad guy's.

I absolutely love researching and I know I've still got a lot to learn, I hope you come with me when as I grow, thank you.

Lake Michigan, it's pretty much the most beautiful Lake your ever going to know. It's everything that a Lake is supposed to be and more. But what's setting this stunning lake apart from any other lake in the area or in the US for that matter, is the strange (supposed) stone circle structure which resembles Stone Henge in the United Kingdom on the lakebed. Is Lake Michigan giving up it's long held secrets of human activity possibly going back a lot longer than the history books are telling us?

I've actually been featured in the UK Newspapers year's ago for a similar discovery in Ta Prohm temple in Cambodia and the subsequent news article which I wrote.

I'm talking about this "Stone Henge" in Lake Michigan which has "supposedly" got a carving of a Mastadon Dinosaur scratched or carved into one of the stone block's surface. Which by the way I might add one crucial detail about this, it's underneath the water!

Let's go back to 2007 to a place called Grand Travers Bay in Michigan, US. Dr Mark Holley and his team of underwater archaeologists have been scouring the bottom of Lake Michigan and they was expecting to discover or at least try to find the wreckage of a shipwreck...

Is this picture a seed sent to Earth by aliens? Scientists discover mysterious organism

But instead the underwater team apparently came across this strange stone structural sight of obvious and deliberately placed stone block's in a kind of circle (or at least the initial details suggested it was) which resembled Stone Henge in the UK.

If this is true then this is big, he (lead diver, Dr Mark Holley) probably started to think this immediately and absolutely loved it because the second that he discovered it, he knew that was going to be a lot of interest like phone calls, many interviews, many debriefings and a lot of explaining about what is actually down there which you'd expect to happen right?

How do I know that? Because if it's hinting at the possibility that it could either rewrite history or correct history, add to or change human history then there's going to be a lot of people interested. Dinosaurs which must have coexisted with human beings then yes, you better believe that it's going to get real, fast!

Underwater rock formations on the lakebed of Lake Michigan and Lake Huron may have been created by hunters thousands of years ago.

Also, did you know about this exact same "Stone Henge like discovery" it's actually not what you think?

Look I'm putting together two sides of the story so you can make up your own mind up about this story?

These sensationalized headlines are misleading: there’s no “henge” to the structure. The stones are small and arranged in a V-shape instead of a circle. Plus, the supposed-mastodon image hasn’t been analyzed to prove whether it’s a carving or a natural feature of the rock.

The real underwater stone sensation lies 120 feet below neighboring Lake Huron: an area the size of a football field with dozens of 9,000-year-old artifacts and human-built stone structures that comprise the most complex prehistoric hunting structure ever found beneath the Great Lakes.

Seriously, for real go and read this news article which clearly stated that exact same statement! It's absolutely incredible stuff in itself. It's clearing up one story with supposed truth (no tangible evidence mind you, just words) and govi g another stunning statement about another 9 thousand years old human settlement of hunters under the waters of Lake Huron.

Archaeologists Have Found Prehistoric Rock Structures Under the Great Lakes. Here's What the Stones Can Tell Us.

“It’s a Pompeii-type situation. Everything is totally preserved in cold, clear freshwater. You don’t get that often in archaeology,” says John O’Shea, an anthropology professor at the University of Michigan, Ann Arbor, who has led the research on underwater sites in Lake Huron.

These underwater antiquities give us a glimpse of how prehistoric human communities worked together to find meat.

Put yourself in the shoes of a dedicated underwater archaeologists? Also, imagine what you've supposedly just stumbled upon which is a new Stone Henge that is more than likely unknown to humanity? Also it's got a carving of a Dinosaur on it's side. That's not just exciting but it's probably more along the lines of being "lost for words" and that's because of the enormity of what you've (in this case Dr Mark Holley) just stumbled upon which is just starting to set in and it's possibly only setting in "bit by bit"...

Thats's a lot to take in.

This is something that is right up my street because a few years ago now, I was researching something similar and I happened to stumble upon an old Amazon Jungle batch of photos regarding carved inscriptions, carved reliefs and strange carvings of a Dinosaur - which basically, to cut a long story short, it came down to the dates. Let's look at the word Dinosaurs and the word Dinosaur, it was only coined in 1841 when Sir Richard Owen came up with the name dinosaur in 1841 to describe the fossils of extinct reptiles. He coined the word by combining the Greek words “deinos”, which means terrible, and “sauros”, which means lizard.

The Ta Prohm temple in Cambodia was built at around the end of the 12th century which, not one person on the planet should have had any information on, or about Dinosaurs and yet there was a really clear and very old Stegosaurus carved really deep into the stone wall. My news article on my blog was featured in the UK mainstream newspapers including the Daily Star.

Depiction of a Stegosaurus in carvings outside the popular Ta Prohm temple in Cambodia is proof the pre-historic creature lived with humans.

The dinosaurs – with broad plates on their backs and spiked tails – should not feature in any carvings as they became extinct millions of years ago.

Here's the incredible video (clip from #theproofisoutthere) showing the underwater archaeologists discovery of the strangest carving of a Mastadon Dinosaur carved onto a stone which is part of the Stone Henge circle of stones in the beautiful Lake Michigan.

I'd absolutely love it if you would share this post with someone who would appreciate it, thanks. Also and more importantly, please share your thoughts and opinions on this supposed discovery in Lake Michigan itself, underneath the water, cheers.

There's always something that makes another thing feel less than real... That's pretty much life in general but in this case, it's actually the (from what I can gather) it's all been taken out of context or total misrepresentation of the facts on behalf of certain individuals?