NASA Commissioned A Research Team To Study UAPs In Ukraine

NASA is actively involved in looking for evidence of Extraterrestrial craft's actually on Earth as well now. Here's evidence of NASA's involvement.

Here's a fantastic piece of evidence that shows us NASA is actively involved in looking on Earth for evidence of Extraterrestrial craft's.

They call it UAPs and this document shows us that the scientist's at NASA have been looking for trans-medium object's in Ukraine.

In other words, the UAPs that the US Navy Jets where busy chasing using the Infrared videos (Flir), it's these which NASA are researching. Trans-medium Objects, from water, sky and space. That's what NASA's going to be researching which is a massive U turn for them, it's a calendar noteworthy event for me as well, it's definitely worth noting when we had "change."

The main Astronomical Observatory of NAS National Academy of Sciences of Ukraine conducts an independent study of UAP also. 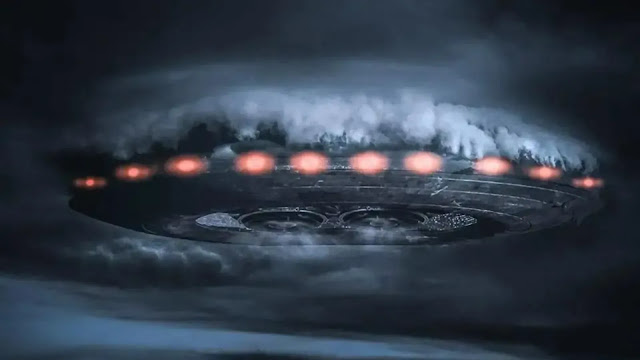 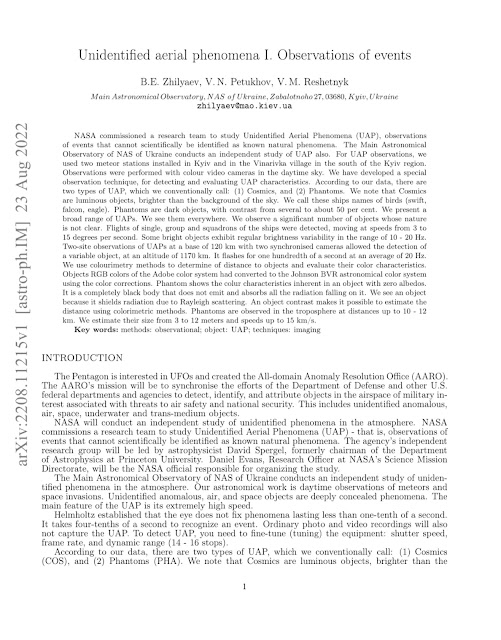 For UAP observations, we used two meteor stations installed in Kyiv and in the Vinarivka village in the south of the Kyiv region. Observations were performed with colour video cameras in the daytime sky. We have developed a special observation technique, for detecting and evaluating UAP characteristics.

For everyone who said the NASA UAP study would be useless, the mere announcement of it is literally cited in the first sentence of the new Ukrainian UFO paper.

According to our data, there are two types of UAP, which we conventionally call:

We note that Cosmic's are luminous objects, brighter than the background of the sky.

We call these ships names of birds (swift, falcon, eagle). Phantoms are dark objects, with contrast from several to about 50 per cent. We present a broad range of UAPS. We see them everywhere. We observe a significant number of objects whose nature is not clear.

Flights of single, group and squadrons of the ships were detected, moving at speeds from 3 to 15 degrees per second. Some bright objects exhibit regular brightness variability in the range of 10 - 20 Hz. Two-site observations of UAPS at a base of 120 km with two synchronised cameras allowed the detection of a variable object, at an altitude of 1170 km.

It flashes for one hundredth of a second at an average of 20 Hz. We use colourimetry methods to determine of distance to objects and evaluate their colour characteristics. Objects RGB colours of the Adobe colour system had converted to the Johnson BVR astronomical color system using the color corrections. Phantom shows the colour characteristics inherent in an object with zero albedos.

It is a completely black body that does not emit and absorbs all the radiation falling on it. We see an object because it shields radiation due to Rayleigh scattering. An object contrast makes it possible to estimate the distance using colorimetric methods. Phantoms are observed in the troposphere at distances up to 10 - 12 km. We estimate their size from 3 to 12 meters and speeds up to 15 km/s.

The Pentagon is interested in UFOs and created the All-domain Anomaly Resolution Office (AARO). The AARO's mission will be to synchronise the efforts of the Department of Defence and other U.S. federal departments and agencies to detect, identify, and attribute objects in the airspace of military interest associated with threats to air safety and national security. This includes unidentified anomalous, air, space, underwater and trans-medium objects.