14 UFOs Filmed From A Ferry In Open Water's

This video is absolutely amazing and jaw dropping because it's a video with 14 UFOs. It's been filmed from a ferry in the middle of the ocean.

Here's what I'm talking about guys, 14 UFOs which is being filmed by the witness on a ferry in the open ocean.

We can even hear people talking about the UFOs which are orange Orbs or Spheres, Ball's or whatever the next round name is going to be created! 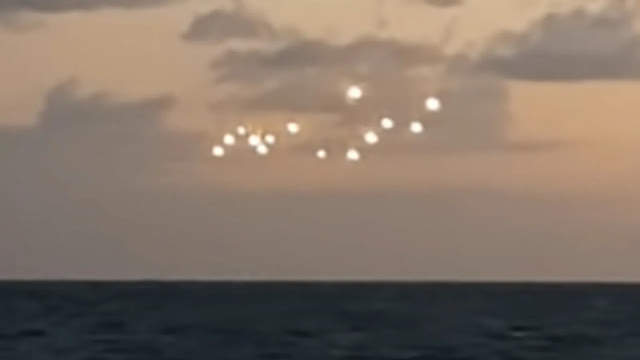 I mean we've just had the UAP acronym created so why not create some more?

Anyways, these UFOs at first looked to me like flares (but it's sunset, we can see everything in every direction) and that's because of the orange glow. I know that flares can be any colour and actually the main bulk of flares I believe are red? But because of the ample sunlight we can rule out flares as it's a waste of equipment, waste of money and totally the wrong environment as there's nothing to illuminate as the Sun's out.

But, orange Orb light's are generally associated with the military and flares I assume need aircraft to release them. But these one's aren't tapering off or slowly vanishing or disappearing at all. As a comparison this is how it looks in the videos of "any" military flares.

The video here was uploaded to YouTube by the "William Guy channel" and I believe that it's him who is actually in the video and it's him who is talking? There's no information with this UFO sighting because all the evidence and knowledge of use in in the video. Also, it's not hard to make the leap or assumption that it's this guy's YouTube channel who saw it and filmed it? There's no description with the YouTube video but we do have the transcript of the actual video which has all the information contained within.

It's just curiosity I suppose, that we really want to understand what is out there over the ocean? With the UAP disclosure all this stuff takes on a more seriousness. If Extraterrestrial life is flying in our atmosphere then we should know. If we don't know and 8t does happen then I'd personally rather be ready!

What I mean by "be ready" is I'd rather have the knowledge beforehand so that I'm not stood there in confusion. And yes, it's almost as if we're living in the Twilight Zone because it's a true fact now that there's UFOs here on Earth and even the US Government doesn't know where they're from? But, personally I think that they know a lot more that what they're allowed to say and I can say that knowing that it's true.

I'll refer you to the recently announced statement from the DoD Department of Defense that yes there's more UAP videos but they cannot be released because they would go against national security. I say "fair enough" because just admitting that in public is all we wanted. Knowing that we are not wrong, knowing that UFOs are real as a matter of fact is enough... At this time.

John Greenewald, Jr., the person who runs The Black Vault, reached out to the Navy, citing the Freedom of Information Act (FOIA), requesting for the release of videos around UFOs or unidentified aerial phenomena (UAP) as the government calls these objects in the public forum. "The release of this information will harm national security as it may provide adversaries valuable information regarding Department of Defense/Navy operations, vulnerabilities, and/or capabilities. No portions of the videos can be segregated for release," said Gregory Cason, deputy director of the Navy's FOIA office, in a written response.

However, the request was denied since they would potentially harm national security...

Look, I don't know what part of "phenomena" is US technology but this is a clear attempt at the US Navy saying it's ours. Or "not everything is Alien." They're clearly trying to backtrack and say it's all technology of human being's. It's their own acronym, UAP is what they came up with. But last time I checked phenomena was not technology otherwise it's not phenomena.

That's why I'm writing that they're backtracking.

As to the witness being on a ferry and states they're in the middle of the ocean. We can't identify the ferry and there's no landmarks on which to reference or take a bearing on so we literally don't know where this was taken.

But like I always say, it doesn't matter because we've got the evidence or the actual UFOs on camera which is key to any UFO sighting and event and "thank you very much."

Lol, having UFOs on camera is key to any UFO sighting, lol. Okay forgive me it's late and I've been drinking coffee lol.

But still, he state's that they're on a ferry in the middle of the ocean, there's 14 UFOs which are not actually that far away from the ferry, that's like being in a room with UFOs. Yes the people who are on the ship might have a radio and will probably have telephones/smartphones but if those UFOs wanted to interact with the exhibits (people on the ferry) who's to stop them, really?

Did the captain of this ferry radio this into the coast guard? Was anyone notified about this unusual event? We might never know.

Just knowing that there's UFOs here is a bit unnerving.

It's maybe not the first thing that people will think of but it must cross some people's mind's?

Real people have been abducted by Extraterrestrials it's not just a story. And I believe that more than ever now because of the UAP disclosure. The US Government has released 3 UAP videos and people in the past have said they've been abducted by Alien's.

Guy's, they've literally just had probably a half of their story verified! That's the Alien part... And the world seems a wee bit stranger after making this connection. The connection is always there, it's just taking time to think about it and what it actually means that the US Government has released these 3 UAP videos.

There's a massive and I mean a huge underlying issue here, it means the mutilation of cattle, crop circles, abductions, experiment's and much, much more all takes on a bigger meaning, a darker side to it and then I think it just get's bizarre. I'm only mentioning the implications of what it means for the US Government releasing UFO videos from military pilot's.

What the hell is true, what is real and is all of it real? And yes, these are valid questions. Of course they're valid questions unless we just ignore it and don't make any connections between each other? I suppose we can go back to a time when it was still up in the air? But only mentally as it's actually taken place, the 3 UAP videos was released.

By the way, it was what 5 day's ago when I wrote about a new statement from the US Department of Defense or DoD. Yes, they have more UAP videos but they will not be releasing them because of matters of national security!

See, everything that I've just written is not ludicrous, it's all grounded in rational thinking based on the evidence.

And probably the most scariest thing of all is how what was once considered crazy is now normal. Tomorrow, what's it going to be tomorrow? What's crazy today really could be considered normal tomorrow because it happened that quickly when the UAP videos was released.

It's the 21st century, anything can change at the drop of a hat. It's no surprises then that the US Department of Defense DoD has more better UFO videos because if the ones they can't release because of matters of national security, that eans the ones they have released are not as good as them. We saw definitely UFOs in the 3 vids already released right, so who knows there could be actual ET evidence within the witheld videos...

14 UFOs, that's definitely a lot of unknown object's traveling in our atmosphere, don't you think? It's not Air Force flares, don't they usually arrange them in a line? Plus flares gradually fall to the ground. These UFOs are hovering above the ocean in the middle of nowhere with nothing to illuminate and it's sunset so we can see in all directions there's no need for flares.