Here's a rock sculpture of a rocket ship type of space craft that is 3,000 years old. Sitchin offered evidence that it's ancient Aliens in origin.

History is not so much wrong as it is absolutely ignored because of the evidence by way of genuine Alien artefacts that proves Aliens visited in ancient times.

Please, by all means don't just take my word for it, why don't we just let the genuinely discovered artefacts speak for themselves? 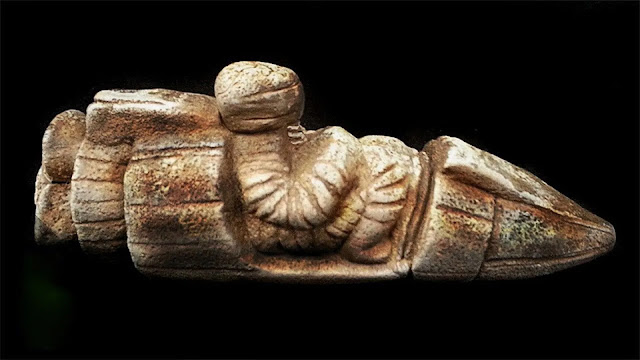 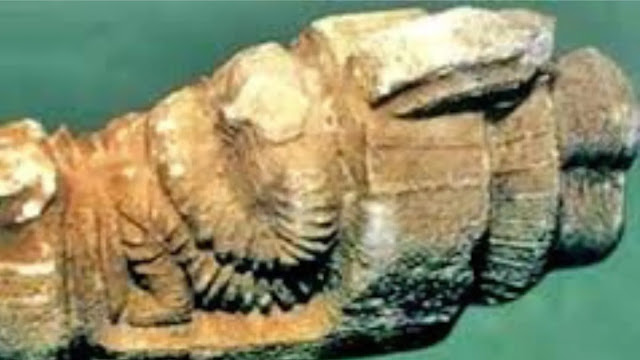 Oh if these absolutely real ancient artefacts could speak, what a fantastic tale these pieces of "priceless artefacts would tell?"
Tales, stories or legends is more to the point because it's a definite case of copied history. Maybe it was an artist, maybe it was just a local or a person who wanted to keep an accurate account of the Alien spaceship?

Ancient Aliens coming down to Earth sounds absolutely bizarre doesn't it? But look at the rear end of the "artefact" that's thrusters for a combustion engine! These are the 20th century only technology and cannot, could not be anywhere before the 1930's so this statue here depicted with a Jet engine or some other strange contraption that clearly had a form of thruster literally, figuratively and literally (yes literally again) should not exist then! The statue is a 3,000 years old piece of space travel history.

Look, when Alien disclosure comes people are going to be asking the questions about all the strange hidden away discoveries just like this rocket type space craft from three thousand years ago!

The pilot's even got an atmospheric pressure suit on! It's also aerodynamic! It's a truly wonderful but bizarre looking statue that defies any logic. Of someone presented this to a person who wasn't aware of it's existence, they'd say this was a recent model by someone who has knowledge of modern day aircraft's for sure.

A 3000-year-old spaceship-looking artifact is one of the most famous artifacts that supposedly prove the fact of the arrival of ancient aliens on Earth. Zecharia Sitchin was the first person that drew attention to it, having discovered the artifact in Turkey in 1973. This mysterious stone artifact incredibly resembles a rocket with modern engines, in which a man is shown sitting in a spacesuit. It could be the ultimate proof for the ancient astronaut theorists that the otherworldly beings visited Earth in the distant past.

So, just what's the chances of it being a total mind blower and a piece of history that's actually directly from the age of Extraterrestrial life coming to Earth? Right, well it all boils down to this actually been from 3K year's ago? It all literally rests on the shoulders of the 23 cm long artefact. Currently though this artefact is in the archaeological museum of Istanbul. It's probably "the wonder" of the world and not just one of the wonders of the world.

Sitchin wrote in his book "The Earth Chronicles Expeditions" and no matter what you might think about him, he's shaped a lot of people's knowledge and views regarding ancient history of Earth and has fitted into this historic version a timeline of Extraterrestrial life which almost on a daily basis it's starting to look more and more likely that he got it correct.

The rock artifact is a carved out, one piece scale model that most certainly (definitely) resembles a space craft of the modern 21st century. It's the pressurised space suit, it's the jet engines behind it which is a needed feature to push a craft through Earth's atmosphere. How would people from 3 thousand years ago know that? Aerodynamics is a relatively new concept. It most definitely did not exist 3K year's ago let me tell you that now! It shouldn't exist in any shape or form at all. So, let's ask the most important question of all, is it a fake?

Well, to answer that I'll just give you a quickie, fact. It's in the archaeological museum of Istanbul. "And" I don't know of any other known to be fake, ancient artefact kept in a museum because a fake anything doesn't usually even make it to a museum! It's original origins is normally determined well before any artefacts could bring a museums reputation into disrepute.

It is 23 cm long, 9.5 cm high and 8 cm wide. Zacharia Sitchin further explained that at the back of the object was a bug exhaust engine surrounded by four small exhaust engines. This spaceship has room for a pilot but look, you can see that unfortunately the head of the pilot is missing.

Guy's, I can only write so much before it's too long of a post or it's now a booklet. I suggest that you look up this exquisite piece of Earth's history, because that's exactly what it is. I can write until the cows come home so please do look this up, there's a lot of information on this and you never know it might lead you into another ancient artefact that you did not know about?

Here's a fantastic piece of history in the shape of an ancient 2,000 years old bronze Matrix.

Here's a quick explanation for the piece as submitted to Reddit by Stanetosane in the group r/archaeologyworld and what a fantastic, beautiful piece of history this is.

Quick quote:
2,000-Year-Old Bronze Matrix from Sarmizegetusa Regia, Romania The item was discovered in the archaeological site of the former capital of late Dacian Kingdom, situated deep in the forests of Șureanu Mountains, southwestern Transylvania, at 1,000 m elevation. 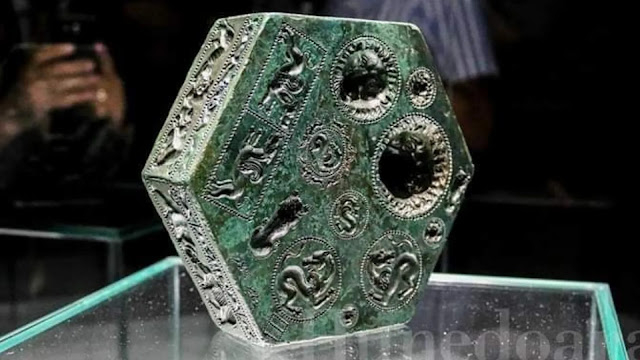 There's a lot of new stuff being found on a regular basis. Archaeology has gifted the world lately "some unusual and bizarre artefacts."

I'm not going to be so blunt with my opinions because it demands it of me. Hidden quite literally and found by archaeologists around the world are thing's that really does turn history on it's head. I don't know why the power's that be don't just all in one swoop put every record straight? From history to Aliens and UFO's plus conspiracies?

Let's have a massive reset and put all the truth out there so human beings can start over with a clean sheet and a good, solid foundation of truth, honesty and dignity...

No laughing at the back please.

Guy's can you please share this post and if you have any thoughts or opinions on this, please share it in the comments section below, cheers.