Here's a brilliant UFO sighting over Wellington In Colorado US. It's a Diamond shaped UFO sighting and apparently it's seen every single morning.

The eye witness has reported this UFO sighting as looking like a "wormhole" and I think you need to know that this has been seen every morning.

I'm starting to think that the witness has either forgot to mention something about it and that possibility we're all just missing some tit bit of info as it's a UFO not a wormhole? 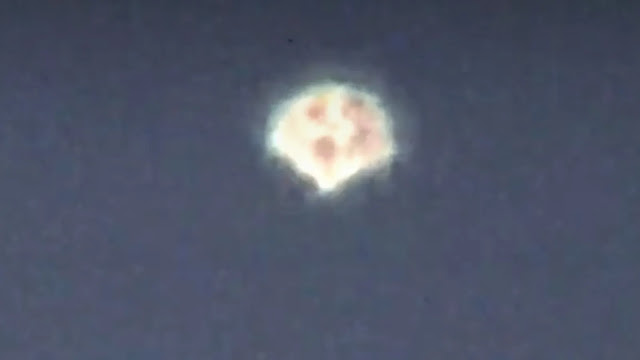 Diamond shape UFO sighting over Wellington In Colorado US.

Anyways, when the witness zooms into the UFO it's hovering and it's definitely not the white dot of light as initially seen. It turns out to have a bizarre diamond shape to it. I still don't know why it's been referred to as a wormhole?

The video is posted on YouTube and even after watching this a couple of times I still don't know why it's been called a wormhole, am I missing something here that you can see but obviously I cannot see? It definitely doesn't really matter because it's still an absolute stunning UFO video.

It's a real UFO sighting I have no qualms in stating that. It's the shape of this thing when it's been zoomed into, it literally takes on some strange, bizarre look which I've never seen before. Has anyone else ever witnessed a shape that looks like this one because normally UFOs don't have anything remotely looking like this?

It's got like 4 black spot's on the front surface (if it's a surface) and it's this which is throwing me through loop's trying to identify it? I've not seen a UFO white light have a totally different kind of look once a closer look can be had! And that makes this one a strange anomaly.

If you've got any thoughts or opinions please, share away as this one's very different from any other and it's intriguing. Do you live in or near Wellington In Colorado, if you've seen it before then please let us know in the comments section, cheers.

Okay so there's this light in the sky I see at work in Wellington Colorado and it jumps around and goes up close and then far away. I took video, poor video, I'll try better tomorrow. This video isn't about the jumping around. It's about getting a close-up of the light. Can anyone tell me what this is or to some video enhancement or something? Again the video is all over the place because I'm trying to zoom in on it so it's me making the light all over the place. Although in the end it does go far away and I can't get a close up of it. The first 15 seconds are the best. Looks like some kind of wormhole. Taken around 4:45am, 4-20-22.

Colorado is most certainly one of the USA most common UFO hotspots because I've personally been sent multiple UFO sightings from in and around Colorado US. I've been asking for people to send me their UFO videos and I'll post them on their behalf here. If you've filmed any and think it should be seen by the world, then let me know.

Here's the extraordinary video which was uploaded to YouTube by Corbin Schon channel: