This is a definite hoaxed Alien Video showing a supposed recovered Alien Grey in Siberia, Russia. It's definitely a piece of artwork only it's fake.

Oh you best believe that it's a truly unique piece of artwork but that's all it is, the Russian, Siberian Alien Grey is a piece of... artwork.

The supposed Extraterrestrial entity in the following video is currently sat Inside the director of cinema photography's cupboard in Russia, probably, it really doesn't surprise me anymore. 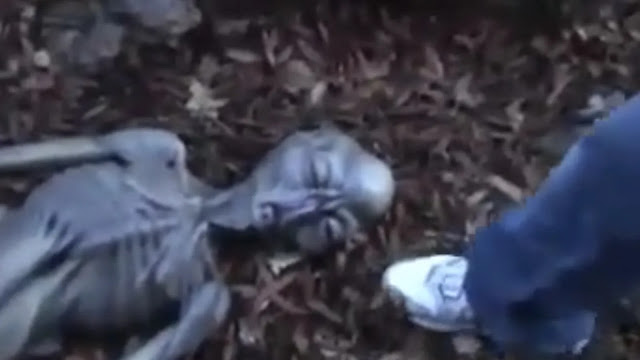 It's a wonderful example of hoaxing Aliens but then being found out.

It's not a real Alien Grey and it's definitely not from a galaxy far, far away. But, let's not forget though that it's still only speculation that it's a hoax which I'll admit that it's only a 50/50 true or false scenario which it's probably a hoax and it's not been fully determined that it's a hoax though so I'll just make it clear about that now.

But, I'm sick of this stuff masquerading as a legit Alien that's been discovered and supposedly in subzero temperatures in the middle of the Siberian wilderness! I'm usually the first person who says "hold on, give it a chance and let's stay open minded" but like someone pointed out to me, there's only so many things that we can be open minded about. Where do we draw a line? I never really had a line that I'd drawn for myself and that's because I really wanted to give everyone the benefit of the doubt.

But that person is right, I've got to draw myself a line at the thing's being real or a hoax. I'm drawing a line in the road and this is the first thing that's gone past that line. The website Classified UFOs has this as a misrepresentation of the truth. It's actually a decent website but the text is very hard to read as it's dark grey on a dark background. The video is towards the bottom of the page.

It's laughable, it's ludicrous and they are laughing at us for believing that there is a real (not departed) Alien Grey in the world. But the only problem is that it's not an headline grabbing Alien Grey is it, it's not an Extraterrestrial at all and that's why it's not in the headlines because it's been determined by other's already that it's a hoax. And there's me saying "hold on, keep open minded".

Did you know that there's a Professor in Ufology? It's absolutely true and it comes under history. Professor David Jacob's is the Ufology expert at Temple University Philadelphia in the USA. This is how far Ufology has 100 percent come along since the dark day's. I'm so pleased that it's getting better, it's getting organized, it's being accepted by pretty much all walks of society and rightly so also it's about time too!

I'm absolutely gutted (on the flip side) because of Ufologies history of belittlement and ridicule at the hands of many different organizations and private individuals (who should have known better) which for whatever reason saw fit to bring about a deep hurt for a sub-group of people who absolutely, definitely saw genuine UFOs and reported them. Subsequently losing jobs, careers, families and friends. All they wanted was to tell the truth and was causing no harm to anyone. That's why I feel so sad about this, because it was undeserved.

I feel like they should look back upon their own misconduct and be ashamed because let's face it, even if it was a mistaken UFO sighting, they had no right to act like that. But that's human beings for you, the human nature is cold, unfortunately.

I'm talking about the politicians, the TV host's, the Government agencies, Government authorities, the Government itself and countless other people who was willing to destroy people's lives for coming forward with UFO sightings which we now know as a matter of fact that they're real. UFOs, yes they exist and yes the US Government knew about this all along. They could have set the record straight at anytime and regained careers, livelihoods but chose not to...

I remember first seeing this Alien Grey video and I was excited about it I'll be honest because I thought just like millions of people also thought that this was real. I even was naïve to think that perhaps people would start to accept that Alien being's are real. But it never had that type of effect. Learning further along the road though that this is a hoax, oh well at least I can say it's because I wanted to see the best in people and yes, I wanted this to be real.

"Grey" Aliens appear like that because they've taken DNA from humans they have abducted, zany Professor David Jacobs claims. Giving his unusual theory on grey aliens, the professor of history at Temple University specialising in Ufology, claims it all 'boils down' to them having a slit for a mouth.

The extraordinary video which was supposedly "one for the history books" lol, has turned out to be a more than likely hoax!

Actually instead it turned out to be one for the red hot coals, because it's a phantom recovered Alien Grey:

If you've already figured it out that it's a definite hoax put forward as a real recovered Alien Grey then please share it please. Also, please share your thoughts and opinions, cheers.