Here's a video from a half mile away from Venture Blvd Los Angeles CA USA. We can see a Mothership UFO with a smaller UFO right next to it. Real UFOs.

Here's possibly another famous UFO sighting in the making because it's got such a resemblance to the recently declassified Scottish Diamond shaped UFO and RAF Jet photographed together by Craig Lindsay.

This UFO sighting happened a half mile away from Venture Blvd Los Angeles California US on the 5th September 2022. 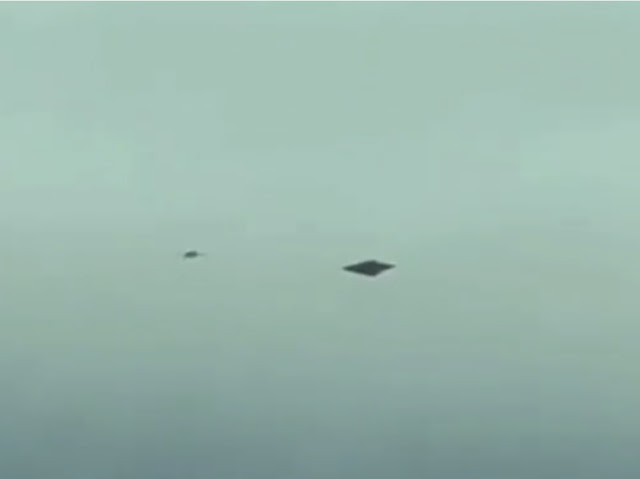 It's just hovers with the smaller UFO next to it.

We know this because the car that the eye witness is filming from and zooming in, onto the UFO sighting from definitely went past a highway sign post which on this sign post it states (with an arrow) Ventura Blvd is a half mile away. The video itself on Instagram has the actual date that this took place on. There's no other information whatsoever about this other than what was posted with the video uploaded to Instagram by ufoglobal_italia.

Will we have Alien disclosure, I hope soon.

Is this UFO sighting real, I'd like to say yes.

Los Angeles has an arrow pointing further onwards. The UFO sighting video has been uploaded to Instagram by ufoglobal_italia channel and it definitely looks like it's real. My mission is to bring the UFO sightings footage that looks real to the world. UFO sightings around world of late are typically of the UFO Orbs type. It's actually not as common as you would think that these are filmed.

The new video (literally it's title) doesn't have any other information with it. The eye witness is filming this UFO and talking about it at the same time (naughty) which tells me that this really could be a genuine, Bona-fide real UFO sighting with an aircraft checking it out.

Or it's one hell of a devious journey involving dishonesty, planning of said dishonesty and that's not good. But I don't get that feeling at all about this, do you? I get a second by second run through of what's happening by the witness and he's pretty much explaining it how I'd expect a response from anyone seeing a UFO sighting...

I like that because it cements it for me that this has a 80 percent chance of being a real UFO sighting. We don't have the luxury of anyone been able to confirm or deny any UFO sighting except for either saying a UFO sighting happened or it didn't happen? But the UFO itself will (hopefully not forever) remain anonymous and so we have to make our own mind up? Of course open mindedness play's a massive part of this because if we deny it, and it turns out to be real in the end then, well I'd rather keep my mind open wouldn't you?

There's a fantastic video which was uploaded to YouTube by UFO News channel:

If you've got any thoughts or opinions on this epic UFO sighting I'd like to hear from you, please share your thoughts in the comments section below, cheers. Please can you share this post with someone who would appreciate it, thanks.