Described As The Most Important UFO Photo In British History

2 eye witnesses actually photographed an RAF Jet up in Scotland while they was in the highland near Perthshire. RAF Jet circled a Diamond shaped UFO.

This photo, one of 6 frames snapped by "classified eye witnesses" up in Scotland is of a Diamond shaped UFO with an RAF Jet circling it.

This story is still continuing because wait for it... The RAF wants it to be sealed for another 50 years! It happened in 1990. This is unprecedented in terms of UFO sightings and subsequent classification status and the RAF reason for these all to stay classified is to protect names! 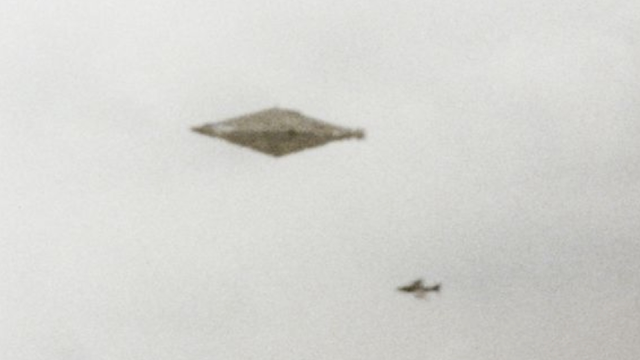 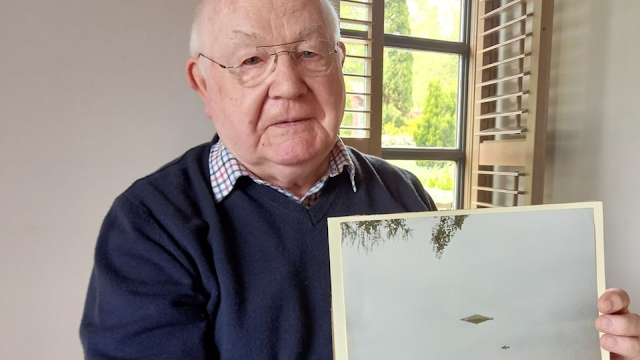 Let's just put aside for a few seconds that the eye witnesses actually took the photo's to the newspaper, so why is it to protect their identities? That's a ridiculous and even contemptuous statement by the RAF. Unless it's a totally nefarious reason meaning that if the public finds out who did the photos they'll have to "serve out a punishment" I mean how else are we supposed to look at their statement when the eye witnesses from the beginning wanted to tell the world, so why is it to protect their identities unless they themselves mean it to be "in their own interests" because that's probably what they mean as opposed to protecting their identities.

Take their statement whichever way work's best for you? Here's a quick quote from the Mail Plus:

Convinced they’d just seen a UFO, they took their photos to the Daily Record, one of Scotland’s leading newspapers. But no story was ever printed: The paper passed the pictures on to the Ministry of Defence. And then, the photographs simply vanished along with the two young chefs. Until now. Here, for the first time, we can reveal that missing picture a photograph one MoD insider described as the most spectacular UFO picture ever captured, and the Holy Grail in terms of hard evidence that these things really exist. It’s a picture the MoD and The National Archives have tried their utmost to keep hidden. While the information would normally have been released after 30 years, the Ministry has not released the original photo and wants the names of the witnesses sealed for a further 54 years until 2076 because of ‘privacy concerns’. 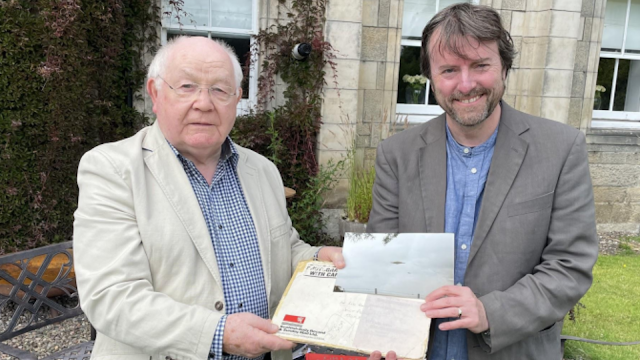 Dr David Clarke (R) tracked down former RAF press officer Craig Lindsay who still had a copy of the photo.

A senior lecturer at Sheffield Halam University of Photography analysed the UFO photograph and here's a quote about it:

‘My conclusion is that the object is definitely in front of the camera, that is, it’s not a fake produced in post-production, and its placement within the scene appears to be approximately halfway between the foreground fence and the plane in the background.’

So, what do we make of this amazing UFO sighting and subsequent fascinating story? We make of it what we will because I personally can't tell you what to think - but I can definitely help you out with finding information on pretty much any UFO sighting out there and that exists? Because in this day and age everything is being put online either scanned by volunteer's at libraries or other and nowadays researchers don't need to leave their own home because all the information is literally at your fingertips now. It's actually a good thing because it's bringing down to bare on the world a massive pool of amazing people who for whatever reason can't leave their homes. Awesome.

Craig Lindsay had kept the secret copy in his desk for 32 years hidden inside his copy of Great Aircraft Of The World. When I eventually tracked him down, now 83 and still living in Scotland, he sounded almost relieved.

Here's the epic video of the UFO sighting in Scotland of the RAF Jet circling the Diamond shaped UFO uploaded to YouTube by Golahura channel: